This morning when hubby and I were chillaxing in the living room drinking our coffee & tea before work, I noticed Bonkers was higher up on the cat tree than I’d ever seen him before: 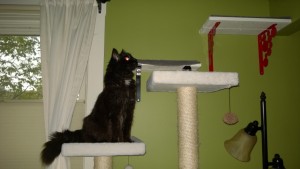 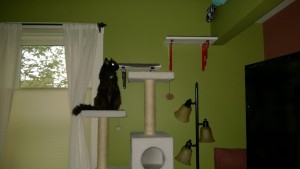 And was fixated on the alcove cue Jaws theme song.  Umm…

The whole reason we have that specific cat tree is because [up until now] it’s been Bonkers proof!  The heights and angles have been beyond his ability to climb.  But apparently, someone’s been practicing!

We watched as he got himself higher: 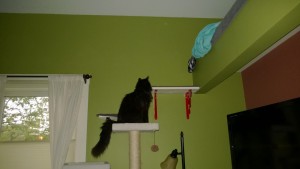 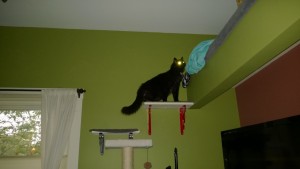 And a few seconds later, this! 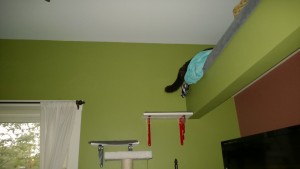 I grabbed the ladder and got him down – he was purring SO loud – so proud of himself!  Can’t say I blame him, but OMG!

I moved the cat tree a bit away from the wall and headed into the kitchen to make lunch while hubby headed upstairs to shower.  A few minutes later I heard Bonkers howling [like he does when he’s stalking Birdie] and he was up in the freakin’ alcove again: 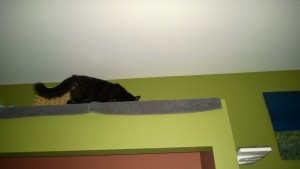 It was at this point that a few things started to make sense to me.  When I first came down this morning I noticed the basket in the alcove was askew.  And hubby said Birdie was sleeping on the upstairs hallway platform when he first woke up.  I think Bonkers figured out last night how to finally get up there and there was a confrontation with Birdie.  Hence the basket being knocked around, Birdie being upstairs, and Bonkers acting like the new King of the Alcove!

So I moved the cat tree to the other side of the living room for the time being.  We’ll have to figure something out later! 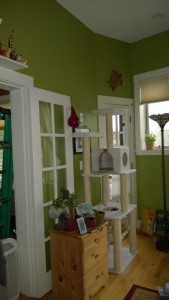 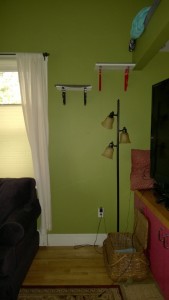 On the one hand, I think it’s great he’s learned how to get up there.  On the other hand, if we let him up there, Birdie won’t have anywhere to feel safe and call her own.  And Birdie feeling safe is paramount.  We don’t know what her pre-shelter life was like, but it couldn’t have been easy.  She has lots of security and trust issues [not to mention being dumped on the side of Route 1 in a cat carrier, which is how she ended up at the shelter].  I don’t want to jeopardize the great progress she’s made since being at our house!

On a side note, I’m still trying to get my act together and post some Hawaii stuff!  I ran into a major problem with my photos, which I’m working to resolve.  We took photos during our trip with 5 devices:  my cell, Jim’s cell, my Nikon DSLR, Jim’s point and shoot, and Jim’s Nikon underwater camera.  Unfortunately the time stamps are all over the place.  Our phones were the only devices that automatically changed over to the Hawaii time zone [EST minus 6 hours].  My Nikon was still time stamping my pics in EST, the underwater camera was time stamping things EST minus 18 hours [???], and I haven’t had time to figure out what the point and shoot was doing.  Thanks to Google I learned that Windows Photo Gallery lets you mass edit the time stamp on a ton of photos at once, which has been a godsend, but I’m still working through the mess!  We have SO MANY PHOTOS that it’s too hard to go through them when they’re all over the map time stamp wise.  And my OCD tendencies might be in play here as well…  So stay tuned!