There’s a fine line between failure & determination.  Currently I am on the failure side: 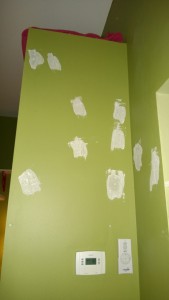 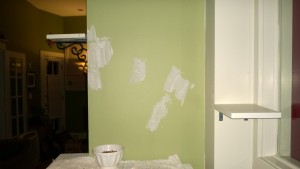 Those are the two walls where I tried – valiantly – to build the latest and greatest cat ramps to get Birdie from her platform up to the alcove.

Another view of failure would be this ramp, which I turned into Swiss cheese with all the holes I drilled for different configurations of braces and brackets: 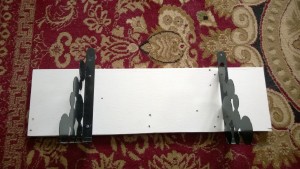 And if you say, well, that doesn’t look TOO bad, here’s a closer look: 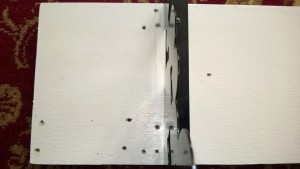 Bonky says “oh hai, did you need a picture of this?  Let me sit on it for you.” 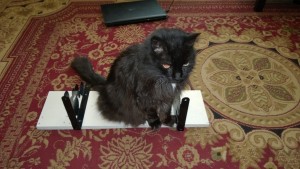 Everything started out well!

Last week I cut and primed the new platforms & ramps: 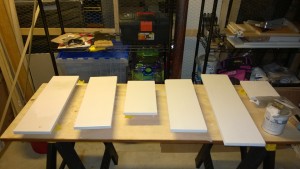 Thursday and Friday after work I painted them and added treads to the 3 ramps: 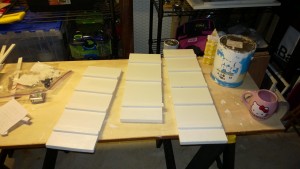 So far so good!

Then I spent 8 hours yesterday trying to attach them to the walls.  EIGHT.  HOURS.

I started with the littlest platform: 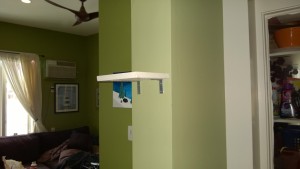 Which I quickly realized was slanting slightly downwards: 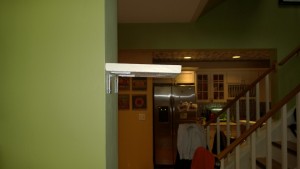 So I shored it up with a shelf bracket: 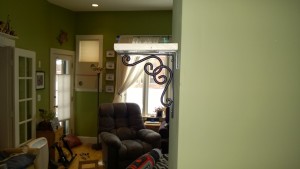 Then I attached the first two ramps – one above Birdie’s current platform and one around the corner above Darwin’s platform: 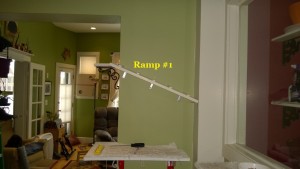 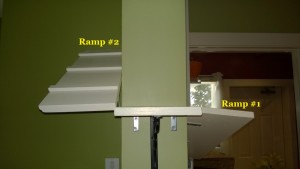 It wasn’t until I took that 2nd picture that I realized how much ramp #1 was slanting downwards, away from the wall.  MEH!  So I took it off the wall and tried installing it with shelf brackets instead: 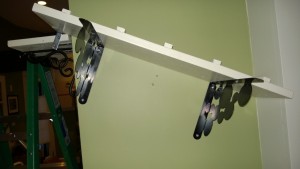 The shelf is much straighter now: 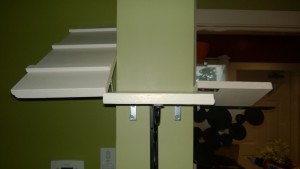 But then I realized the cats might hurt themselves on the little bit of bracket sticking out from the shelf, which you can see in this picture [which I took after the fact, of the left bracket, to illustrate my point]: 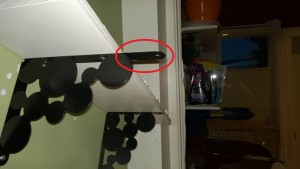 So I flipped the right bracket the long way [there wasn’t enough room to flip them both the long way]: 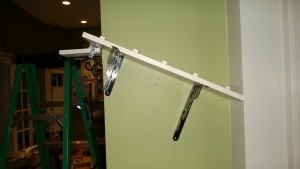 Then I moved back around the corner into the living room and hung up the next 2 platforms: 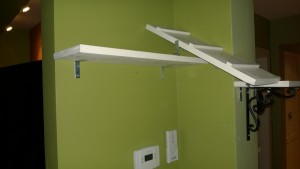 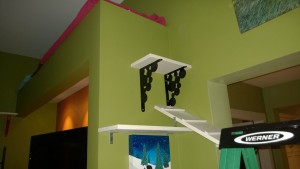 Instead of installing the 3rd ramp I chopped it into 2 smaller platforms and installed one at the “start” of the sequence and one at the end [that white circle in the 2nd picture is a dust particle floating in the air from all the holes I drilled in the drywall *sigh*]: 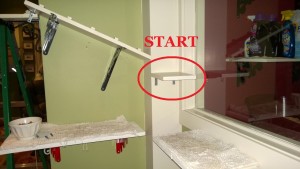 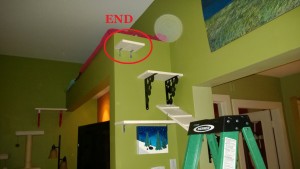 At that point, I thought I was done!

But then hubby pointed out the cats would have a hard time navigating from the central platform [the one right above my painting] up to the other 2 before reaching the alcove.  There wasn’t really enough head room for them to get a good jump angle in: 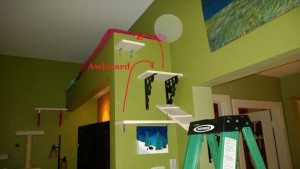 I totally agreed.  The middle shelf was too high and the top [mini] shelf was potentially unnecessary.  So I took them down.  Meanwhile, Darwin gave the first few ramps/platforms a try [that’s another dust particle floating above his tail]: 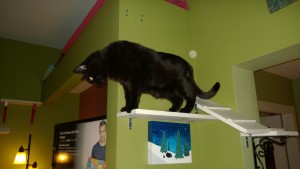 Then he stared up at the alcove and gave a very frustrated meow.  I know, dude, I’m working on it.

Then he turned around and took great care to step OVER the ramp to reach the smaller platform.  And I realized the ramp wasn’t necessary [the one that’s behind him in the picture above].  So I took THAT down.

Then I decided I may as well take down the first ramp, too:

Since, as hubby noted, the cats seem to prefer platforms [which I kind of knew anyway, from when I installed my first ramp in the dining room last year, which was another epic fail].

Which is how we ended up here, with 2 tiny remaining platforms, no ramps, and a lot of Spackle [well, actually Joint Compound which I found out isn’t as thick as Spackle and needs about 4 coats – meh]:

This morning I washed off the excess Spackle and now the holes look like constellation patterns: 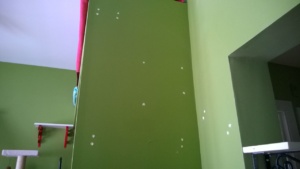 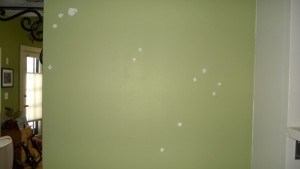