Over the course of the past month, I’ve been building a series of shelves and platforms designed to get Birdie & Darwin into the alcove above our TV.  I thought I was done.  Both Birdie & Darwin LOVE the alcove and are always up there, sometimes together [if you zoom in on the 2nd pic you can see Darwin’s great big smile!]: 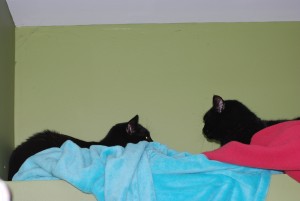 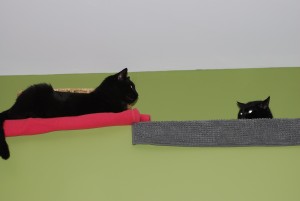 And we see a lot of Birdie’s feet: 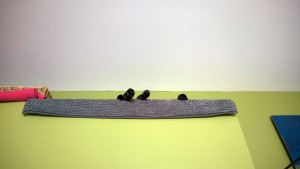 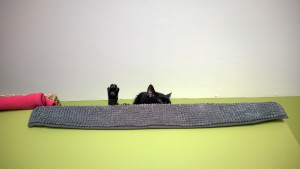 But not poor Bonkers.  As Jackson Galaxy would say, Bonkers is a bush dweller, not a tree dweller.  The floor is his domain.  Bonkers [full name General Bonkers] is a mess.  We adopted him from the shelter in 2012.  Like Hubby says, it’s like someone took a box of defective cat parts and Frankenstiened the poor thing together.  He’s missing a fang.  His fur is always a mess [greasy, scabby, and/or matted in clumps, no matter how much we brush him].  His hip joints are loose [the vet said it’s nothing to worry about and causes him no pain] so when he walks he often wobbles and sometimes falls over. 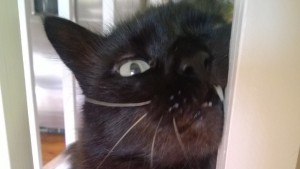 When he tries to jump on the couch he often chest-checks himself and gets bounced back to the floor.  But he’s sooooooo loveable!  Every night when I climb into bed he jumps up [our bedframe has a wide, wooden ledge around it, making it easier for him to launch himself up] and sits on my chest while I pat him.  He purrs and kneads and sometimes even drools.  It’s wonderful!  When he’s really happy he lays on his back with all his feet in the air: 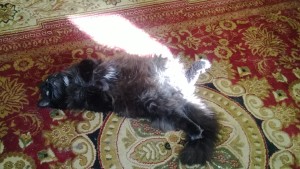 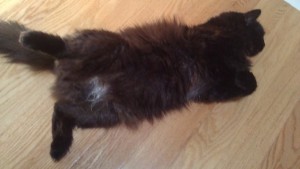 The most endearing thing he does is sit on his hind legs and beg when he wants attention or food: 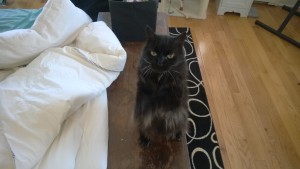 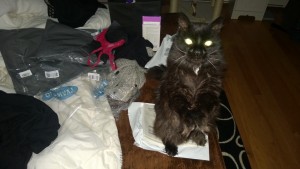 It’s so hard to get a picture of him doing it!  Please excuse the mess… Gawd…

It’s obvious to me he feels very left out regarding the cat platforms.  And apparently, unbeknownst to us, he’s been secretly plotting ways to get up onto them.  It would be an absolute disaster if Birdie jumped up onto one of her platforms and found Bonkers waiting for her – we’re afraid she’d go into permanent hiding!

Three weeks ago I came out of the downstairs bathroom to this sight: 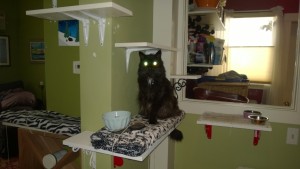 That’s Bonkers sitting – very proud of himself – on Birdie’s downstairs hall platform.  I muttered a long string of obscenities and put him back on the floor.  A week later I came into the living room to this sight: 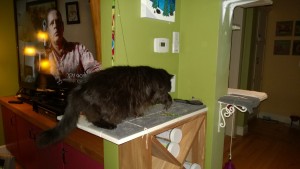 Gah!  There he goes again, on his way to Birdie’s side of the platform.

He’d learned [OMG] how to jump up onto the new cat tree in the living room!  Which was right next to the TV platform: 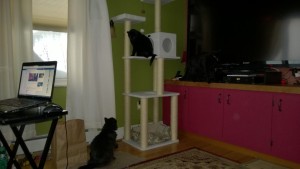 Jim suggested moving the cat tree over in front of the window, to keep Bonkers from reaching the TV platform.  Which was an awesome suggestion!  But meant I had to quickly cut, prime, paint and hang a new shelf to allow Darwin and Birdie access to the alcove, which was now further away from the cat tree: 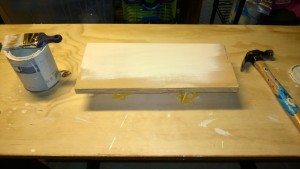 I didn’t have any more red brackets so I used black ones.  We kind of like the look of the different colors.  Darwin quickly got used to having to traverse 2 platforms to get from the cat tree to the alcove: 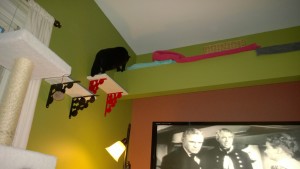 And Birdie decided the new platform was a great place to check out the goings on outside!  I moved the curtain for her so she could see better.  She liked that quite a lot: 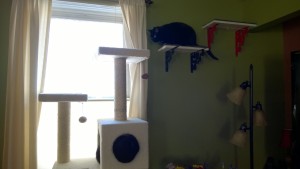 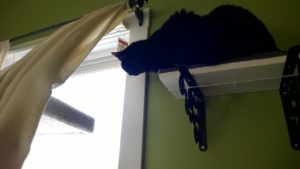 Then last week I came into the living room and witnessed Bonkers jumping from the lower platform of the cat tree up into the middle house.  GAH!!!   This is getting out of hand! 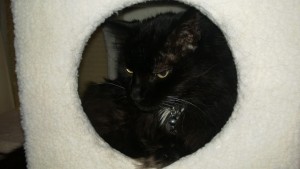 Now all three cats take naps in the cat tree house!  Maybe it’s good…  Jim thinks shared nap spots are a good way for the cats to get used to each other’s scents.  I don’t know… as long as Bonkers doesn’t decide to keep going and get himself into the alcove, I’m OK with it!!!