My office was closed again today due to the crazy #@$% snow that keeps falling.  There’s literally nowhere to put it anymore.  I have no idea how much snow is actually on the ground – somewhere between 4 & 5′ I believe.  The snowbanks are so high you have to heave your whole body to get the new snow up and over the top.  It really sucks!  Hubby had to go to work today which meant some early morning shoveling to get his car out [I usually go out and shovel while he’s showering and getting ready – my office is a LOT more lenient about closing due to weather].

And then, since I was home alone, I decided to tackle something that’s been bothering me.  The snow & ice buildup on the roof of our front entrance: 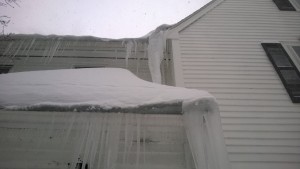 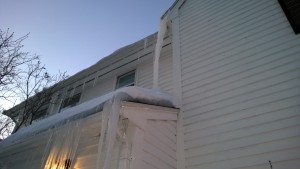 That is a big ice dam!

And the snow has gotten so tall it’s blocking my view from the upstairs hall window.  Normally the view from that window looks something like this: 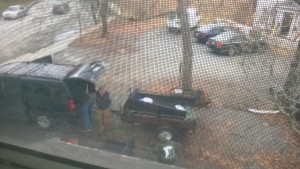 I took that picture January 19th as the nice people who bought our couch were loading it onto their trailer.  That was only THREE WEEKS AGO. 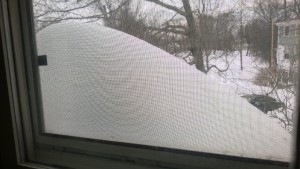 I hated not being able to see out the window more than I hated the idea of all that ice pressing down on our roof, but that was obviously a big concern, too.  That’s the window where I can spy on everything going on in our driveway and street!  I couldn’t even tell if the driveway had been plowed without having to actually open the front door.  Meh.

So this morning I dragged my Little Giant ladder downstairs [it usually lives in the girl cave], set it up to be a full-length ladder, and got dressed for battle: 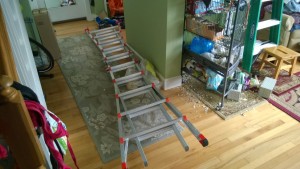 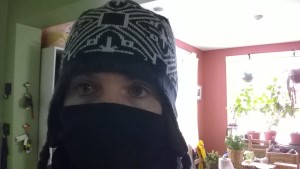 Then I hauled it outside, dug some room for the feet, extended it out a couple notches, and climbed up: 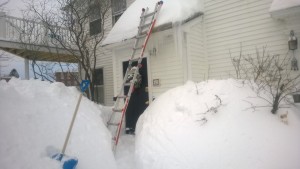 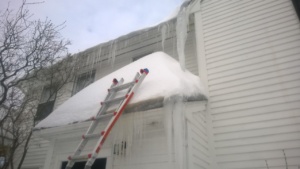 Here’s the view from the top: 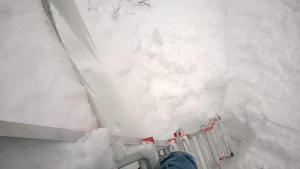 Doesn’t look like much.  It’s hard to get any depth of field when everything is WHITE.

After 10 minutes of digging I finally found the roof: 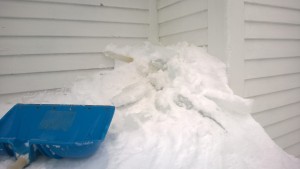 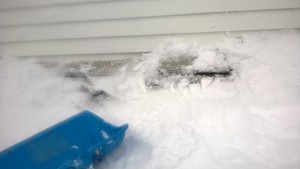 I removed a ton of snow and ice [perhaps literally] from the roof.  The snow up there was very dense.  I’m assuming that being on top of a house provides a low level of warmth 24/7, so it melts and then re-freezes at night.  There were a HUGE amount of ice blocks up there, too.  And icicle fragments after I smashed as many as I could off the bigger roof.

Here’s what things looked like after I’d had enough.  I didn’t get it all, but I got a lot of it: 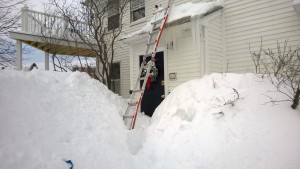 And here’s 2 pictures of what it looks like to stand outside our door.  The snowbanks are freaking HUGE.  The pictures are a little blurry because I was taking pictures with wet hands and the lens got some water droplets on it.  That’s our deck in the background: 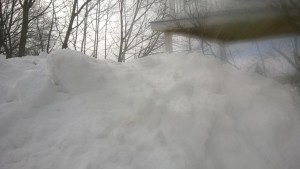 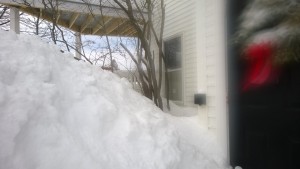 And here’s the view from the upstairs hall window NOW: 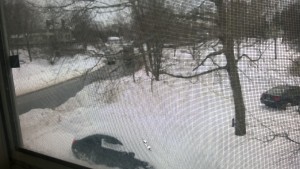 I can see out again – YAY!!!  I dinged the screen with the shovel – oops.  Will have to repair that this spring.

A smaller issue I had to deal with today was our living room window.  There was a ton of snow building up INSIDE the storm window.  Here’s what it looked like with the window open and the storm down: 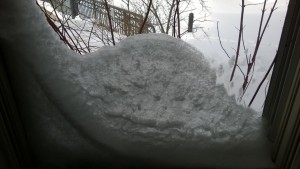 That’s my blogging window!  I like to look out and watch the people go by on their way over the footbridge while I write.  I can’t blog well if I can’t see out!  So I used a kitchen pot scraper and got all the snow and ice off the storm window and tossed it outside.  Now I can see out again: 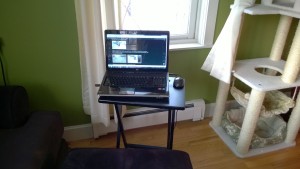 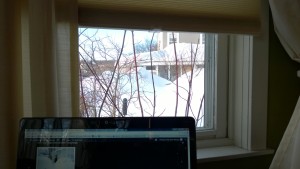 I bet you thought I was done with snow for the day, right?

Wrong!  I decided to clear off the deck:

Here’s what it looked like when I opened the bedroom door – Bonkers says “I’d love to go outside, but not in that!” 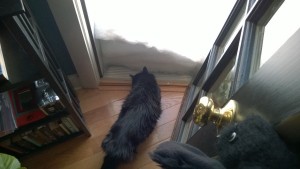 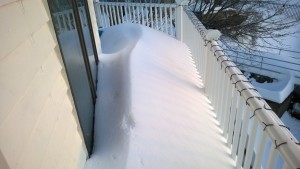 10 minutes later I was halfway done: 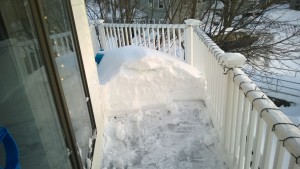 At least I could enjoy the sunset as I worked: 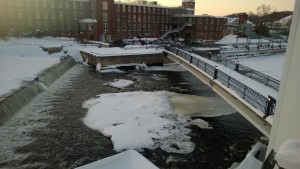 Here’s the view off the other side of the deck, of the driveway [we moved our cars across the street so the plow man can do his thing] – you can see the roof I cleared off there on the left: 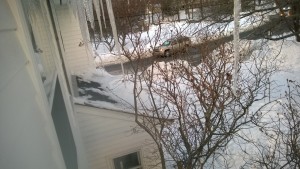 Another 10 minutes of shoveling and I was DONE: 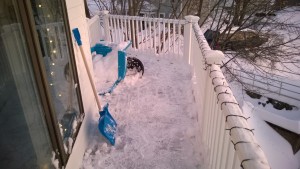 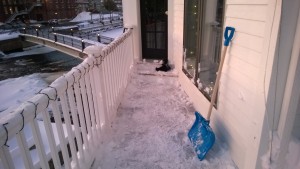 It’s all bathed in pink from the setting sun!

God my arms are tired.

The best part of today was being greeted by hubby at the door with a bouquet of beautiful flowers!  I have an awesome hubby 🙂 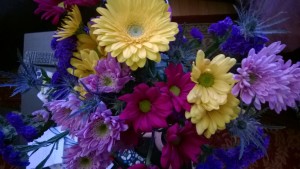 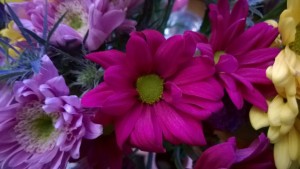 He also brought me a chocolate cake with mocha icing *HAPPY DANCE*!

Hubby did his share of shoveling today too.  Once he got home he went right back outside, dug my car out, and moved it across the street.  Once the plow man comes he’ll move them both back into the driveway and we’ll be all set until the NEXT STORM, which is supposedly coming on Thursday… *SCREAM*!