I didn’t think so, but apparently we have the driveway from Hell.  After Tuesday’s storm, where we got slammed with 28″ of snow and 60mph winds [all within about 12 hours], we waited for our normal plow guy to come.  And waited.  And waited.  Jim finally called him Wednesday afternoon and was like “dude, where art thoueth?” [he didn’t really say it that way, but in my head he did] and the plow dude was like “I shall arriveth to thy house by 6pm”.

Around 7pm Jim got a voicemail saying “I came by, but the snoweth is too deep and too hard-packed. Mine drive-shaft broke after only a few swipes.  Thou’ll hast to hire a front-end loader to geteth in thither and removeth the snoweth”.  Um, what???  A front-end loader?  I thinketh not.

OK, I’ll stopeth with the converting to Shakespearean English, even though it’s making me doubleth o’er in giggle fits… if thou wanteth to tryeth it yourself, click hither [LMAO!!!].

We went out and took a look: 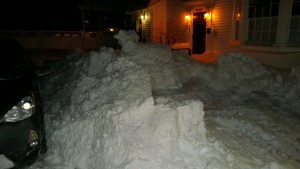 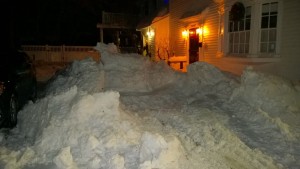 [If you zoom in you can see my silly husband in the background, leaning out the door, making funny faces].

So yeah, totally screwed!  We always park our cars to the left of the driveway when a storm is approaching, illegally, in the no-parking zone between our driveway and our neighbor’s driveway.  This leaves our actual driveway free for the plow to clear.  We don’t like leaving our cars illegally parked any longer than we have to, so when our plowman told us he couldn’t help us, we were like %#^*&!

As Jim was leaving for work Thursday morning he said he’d call some local plow companies to see if anyone had time to come check out our situation.  I had to wait at home for our new couch to be delivered, so waiting for a plow company wasn’t a big deal.  After he left, I moved my car across the street to the public lot to make room for the delivery truck and [hopefully] plow truck: 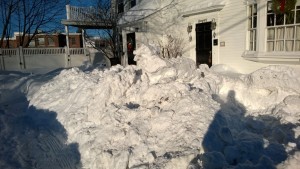 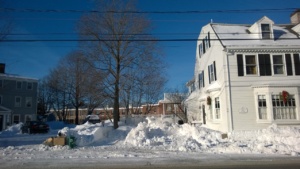 The first 3 plow companies told Jim “sorry, no time today”.  The 4th one agreed to at least come and take a look.  He said he’d be there in about an hour [aka around 9:30].  Then the furniture delivery company called and said “be there around 9:30”.  That’s when I started to stress.  At 9:30 the doorbell rang and it was the furniture company.  Phew.  In less than 5 minutes we had our new couch!  Woohoo!  LOVE IT!  So comfy and purple: 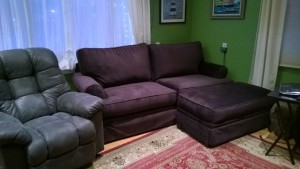 Then 10 minutes later the plow man came by and said he thought he could do it.  He had a huge plow truck and a tiny Pomeranian in his lap – it was adorable.  10 minutes [and $100] later: 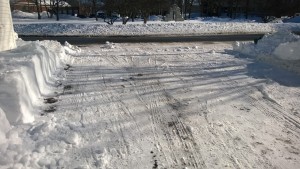 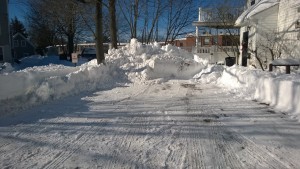 Yay!!!  My neighbor Kathy came out and was like “that’s going to be there till Spring…”, staring at the giant snowbank.  That’s for sure.  It’s higher than the fence to our yards: 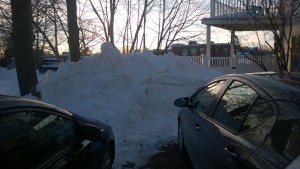 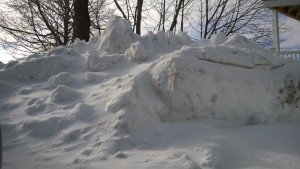 But at least we can park in our own driveway again!  That’s all I care about right now!  Well, that and watching TV at night without getting a crick in my back 🙂