This post is mostly so I can remember the specs of my own ladder.  Heh.  My $300 Little Giant Alta-One [Model 22] articulating ladder [which is typically cheaper on Amazon] [#affiliate] was my first big DIY purchase back in August 2013.  There’s an awesome demo video on YouTube that I watched prior to purchasing, which sealed the deal for me on which brand and type of ladder to buy.  It does so many awesome tricks and is so easy to use!

I mentioned in my last post that the top of the ladder was 15 feet high [I have since corrected it].  After posting, my Mom asked “then how high are your ceilings?” and I said “15 feet” and promptly realized my ladder can’t be 15 feet high.  Duh.  So I had to review the specs of the model I bought.  It’s actually 11 feet high when fully extended as an A-frame, which makes sense.  I’m 5’5½” and can stand on the 3rd rung down and just barely reach the wires in the ceiling while standing on my tip-toes with my arms fully extended. Which, now that I’m thinking about it, makes the ceiling closer to 17 feet high… ugh.  Glad we got that ball untangled…

The ladder is 5’7″ tall when closed and folded, and weighs 37 pounds.  Which is JUST at the outer edge of what I would call “manageable”.  Because of it’s weight, it lives in the girl cave, leaning against the wall.  Which saves me from having to lug it up and down 2 flights of stairs [to the basement and back] every time I need to use it.  It’s also SUPER handy if you need to use it on stairs – just extend out one leg of it and leave the other side closed: 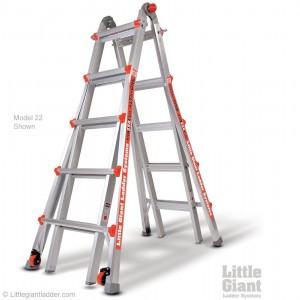 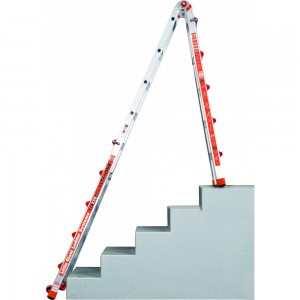 Here’s my ladder fully extended into an A-frame in the bedroom: 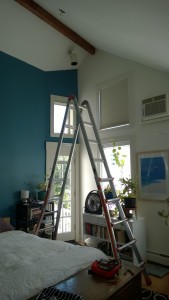 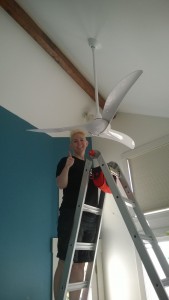 And straightened into an extension ladder in the girl cave last year: 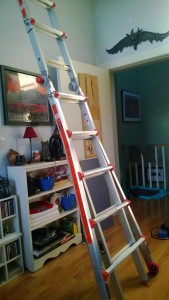 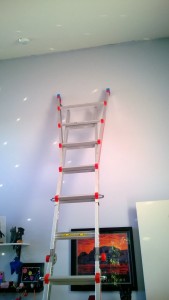 Extending it up into an 11-foot A-frame by yourself is super quick & easy.  However, straightening it out to use as an extension ladder can be, um, challenging…  First you have to extend one side out a few notches to get some height.  Then pop the 2 buttons on either side of the central hinge to make it swinge-able.  Then swing the extended side up into the air and against the wall.  Sounds easy, right?  Not!  With each side weighing just shy of 20 pounds, and with each side being bottom-heavy, it quickly turns into a, um, insert swear word string not suitable for my nieces & nephews.  The side you’re trying to swing up into the air quickly becomes top heavy and starts swaying wildly as you [try to] aim for the [correct] wall.  Let’s just say it’s very easy to punch holes in your drywall… ahem.  It also doesn’t lock into a straight line until it’s up against the wall IN a straight line.  So if you get it most of the way up, and your arm muscles decide they’ve had enough, it quickly starts to come back down again.  While you’re under it.

I  just realized I might be able to utilize the wheels attached to one end of the ladder.  Maybe I can somehow use them to roll it up the wall… Ugh.  Which reminds me:  always make sure the wheels are facing UP when you extend the ladder.  Otherwise you climb 15 feet in the air and start slowly sliding down the wall, which [trust me] trips the panic reflex in your brain whether you want it to or not!  Learned that the hard way [if you’ll notice in the above 3 pics of the ladder fully extended – the wheels are on the ground – obviously before I learned the hard way]!!! 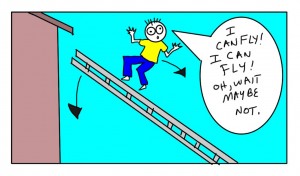 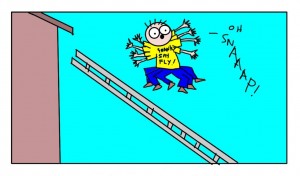 Cartoons courtesy of this site.  They were just too perfect not to borrow!

Last night after work I was reading the specs on the side of my ladder.  I was getting confused until I realized the heights they list are the based on someone standing 3 rungs from the top, not the actual top of the ladder.  The actual top of the ladder is 11 feet when extended into an A-frame [not 9], and 21 feet when fully straightened into an extension ladder [not 19].

Little Giant also makes a ton of awesome accessories for their ladders.  I bought 3, which I’m reviewing in the order I like them:

[1] The Little Giant Cargo Hold Tool Bag, which you can get on Little Giant’s website or Amazon [#affiliate] for $30: 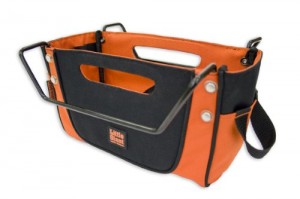 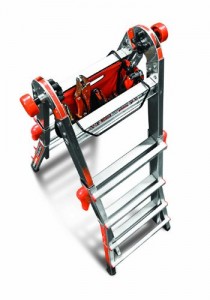 This accessory is INVALUABLE!  I use it almost every time I use the ladder.  If you’re working with the A-frame setup, it hooks neatly between the top rungs [like in the 2nd pic].  It saves me SO MANY trips up and down the ladder.  If you’re working with the ladder fully extended, it hooks onto any rung and hangs where you need it.  It also has very comfortable carry handles for toting it around the house [which I tend to do since I usually have more tool basics stored in the Cargo Hold than in my tool box].

[2] The Little Giant Wing Span/Wall Standoff, which you can get on Amazon [#affiliate] for $40: 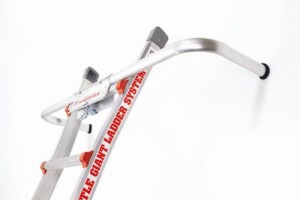 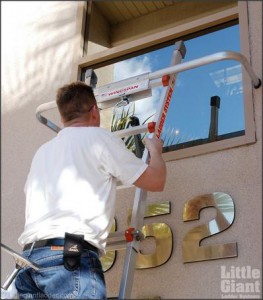 I found this helpful for when I was painting the girl cave ceiling, because it allowed me to reach backwards [over my head] further with the roller.  It also made me feel more secure with being up so high.  And I just noticed another benefit of it on Little Giant’s website [I just screen-grabbed the picture for this post]:  if you need to paint around a window, the Wing Span lets you get up close and personal without risking cracked glass or having to reach really far sideways – score!

[3] The Little Giant Project Tray, which you can get on Little Giant’s website or Amazon [#affiliate] for $40: 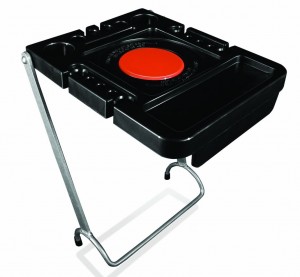 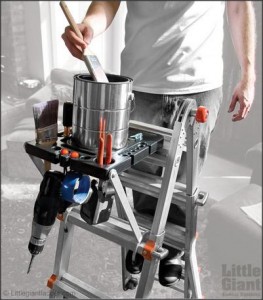 This did not impress me as much as the other accessories.  It’s made to hold a paint can in the middle [the red circle pops out to give you more size options, or to provide a handy drink holder], and has assorted openings around the outside to hang hammers, screwdrivers, a drill, etc.  But I found it more cumbersome than useful.  If you’re using your ladder as an A-frame it’s OK, but only if you’re standing at the top [like in the 2nd pic].  If you’re standing more in the middle of the A-frame, your paint gets further and further away.  Same with if you have the ladder fully extended.  More awkward than helpful.