In honor of Valentine’s Day [our fourth!], I decided to tell the story of “us”.  As in Jim & I.  It’s been a fairytale romance from the start, with no signs of slowing down.  Which makes us both SO happy!!!  We’ve both suffered through years of bad relationships in the past, so we were ready for something good!

I spent roughly 5 years as a happily single girl before meeting Jim.  And he’d spent years dating here and there, with nothing serious.  I did date my long-time friend Ted for a few months before meeting Jim, but Ted and I mutually decided we were better off as friends and had the most amicable break up ever.  I think we sat down on his couch, looked at each other, said “this isn’t working”, both nodded, then watched one of the Star Trek movies [back to friends immediately].  The interesting thing about Ted is he’s like the guy from Good Luck Chuck.  He doesn’t date often, but when he does, his ex’s go on to marry the next person they meet.  It’s a little freaky! 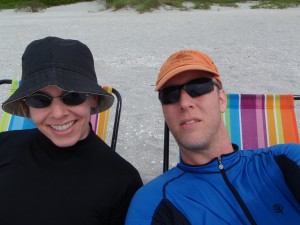 Here’s where the story gets a little shady, because depending on the mood I’m in, and who I’m telling, I either say that Jim and I were introduced by a mutual friend, or that we met through Match.com.  Both are true!  Mostly…

After breaking up with Ted, which was around the same time my dogsitting business ended, I started getting really bored on the weekends.  There’s only so many video games and movies you can immerse yourself in before you start looking for other entertainment.  Being bored was a totally new experience for me [I was never lonely, thankfully, just bored].  With no dogsitting job, and no boyfriend to entertain me, I started going a little nutty.  So my friend/therapist started cajoling me to join a dating site.  She swore that many of her clients had had great luck with them, and found the loves of their lives.  I was SO against the idea.  It just seemed so, I don’t know, un-authentic. 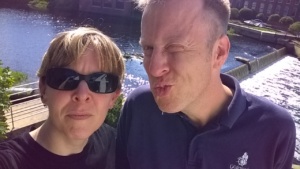 But in reality, I’m not sure how else you can really meet people these days!  At work?  Been there, done that.  A bar?  Not my scene.  The gym?  Not usually feeling my prettiest there!  Social media sites?  I had a very bad experience with someone I met on MySpace so that was definitely out.  So unless you’re lucky enough to meet someone via a mutual friend or by bumping into a stranger on the sidewalk, dating sites seem like the best bet.  So I caved and agreed to sign up for one.  For ONE MONTH.  I told my therapist that after the month was up, I was done.  She sighed and said OK.

To say I wasn’t taking the dating site thing seriously would be an understatement.  I joined Match.com because it seemed like the biggest and most generic, with the least likely chance I’d actually meet someone decent.  Here’s the picture I used for my profile: 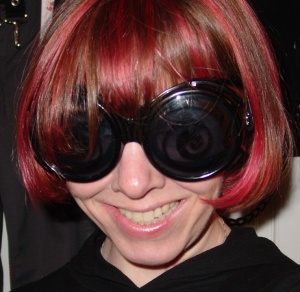 I figured if I had to do this, I might as well have fun with it.  I assumed that picture would weed out MOST of the people looking for love, and would just leave the few oddballs that could appreciate something slightly out of the ordinary.  I didn’t write much on my profile, just that I loved animals, didn’t smoke, had never been married, didn’t have kids, didn’t want kids, and wasn’t religious.  Inside the profile I did add a few “normal” pictures.

DAY 1:  A few people messaged me, but only one seemed interesting, an artist from the South Shore of MA.  We agreed to meet up in Boston for coffee/tea.  He was nice, but a complete dingbat.  I think he was bi-polar.   So did my therapist when I told her about his weird outbursts and OCD-ish behavior.  It was a nice [albeit weird] afternoon.  He called a few days later to request a 2nd date but I declined. 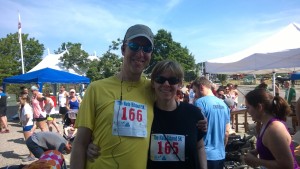 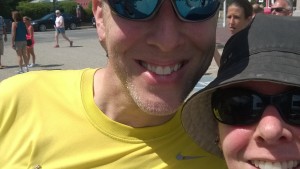 DAY 4:  Someone from my town messaged me, and asked if I’d like to take a walk [during the day, in a public place], so I said sure.  For the entire half hour walk he was texting people and staring at his phone.  He never asked me anything about myself, and the whole experience was very disconcerting.  As soon as we got back to our cars, we went separate ways, never to talk again.  By this point I was getting discouraged.  My therapist told me it had only been 4 days, and that some of her clients had been on dating sites for YEARS before finding true love [I don’t honestly know how people have the mental stamina for that – I found the whole thing exhausting!].  I reminded her there were 26 more days in this adventure before I was pulling the plug.  She rolled her eyes. 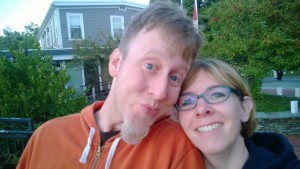 DAY 5:  I met Jim!  He messaged me to say that my profile was pretty empty, and he’d like to know more about me.  So I beefed up my profile with some actual words and more pictures.  I wasn’t sure if I liked him at first, because he was blond, and I’d never had good luck dating blonds [dumb, right?].  My therapist said I should “date outside my comfort zone”, so I agreed to give him a chance.  I also liked that he was looking for age-appropriate women.  Most of the men in my age range were looking for much younger women which I found quite tacky.  I thought it was cool we were both in our early 40’s [I was 40, he was 43], had never been married, didn’t have any kids, and didn’t want any kids [we both love kids but have never felt up to the task of being parents ourselves].  Also, we only lived 20 minutes apart! 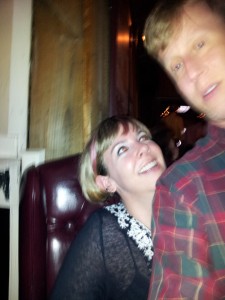 We figured out pretty fast that we both loved the spinach quesadilla’s at the local Mexican restaurant, so we met up there for dinner the next night.  And it’s been amazing ever since!  I remember he scolded me because after dinner, and after talking at the restaurant for a few hours, we didn’t want to part ways quite yet, so I told him he could come back to my place to talk some more [if he promised to be a gentleman].  He was like “you’re NEVER supposed to invite people you meet online back to your house!!!” And I was like “but you don’t seem like an axe murderer!” and he was like “I’m not, but that’s not the point!…  but I’d love to talk more, so OK!”.   We ended up talking on my couch until 2am before he finally headed home!  Before leaving he got to meet my old [& obese] rat Wilber: 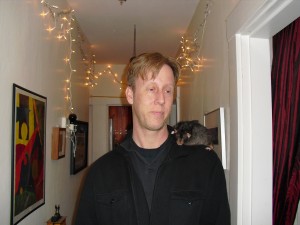 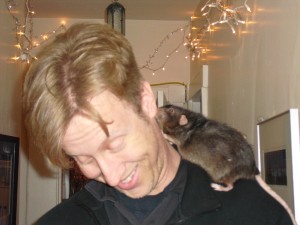 Thankfully Jim’s as much of an animal lover as I am!  He emailed the next day to invite me to dinner [we both agreed we aren’t into the whole “you have to wait 3 days before calling” crap].  So we had dinner the following night, and pretty much every night since!

DAY 7:  In conversation Jim mentioned he took yoga classes at the local Y.  I was like “Cool!  My friend Christyne taught yoga classes there before moving out of state”.  And he was like “Christyne?  I took some of her classes, she’s awesome!” and I was like “I know!”.  So I called her up and she was like “Jim is SO nice and SO funny!  You guys are perfect for each other!” So that was really cool, to have a mutual friend in common!

DAY 10:  I canceled my Match.com profile.

Right after meeting we realized we had a ton in common.  We both had parents in the Fort Myers area of FL – they’re literally one bridge away from each other.  That makes visiting them so easy!  We both have brothers who’ve been married for years and have bevies of children.  My brother has 4 kids and Jim’s brother has 3, and they’re all within the same age range.  The only time they’ve all met is at our Vow Renewal Ceremony in 2013 [6 out of the 7 kids are in that picture – best I could do!]: 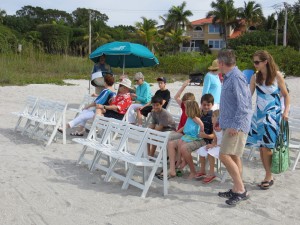 We also have similar eating preferences [Jim is vegetarian, I’m mostly vegetarian], similar sleeping preferences [the more the better – we’re in bed by 9 almost every night, 7 days a week!], we’re both lazy bums, but we also enjoy walking [me] and running [him], so it balances nicely.  We’re both slobs by nature, but prefer a neat house, so we’re in a constant state of picking up after ourselves and each other.  Sometimes I’m the one picking clothes off the floor and putting dishes away, and sometimes Jim is.  He does all the laundry, I do 75% of the meal preparation [we have “every man for himself” dinner nights when I don’t have the oomph to deal with cooking]. 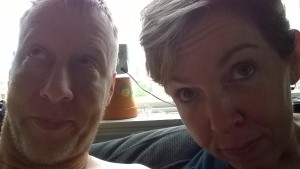 We both spent years cultivating excellent credit histories, we both have thrifty spending habits, and we’ve both been stashing money into our 401k’s forever, so we each had a pretty good nest egg going before even meeting.  We constantly make each other laugh, which always helps!  We have similar taste in TV shows, movies, and home decor.  Not in music, but that’s OK.  Not everyone can be a fan of German Industrial [me] or NPR [him].  I try to like NPR, because I know it’s good for me, but I get soooooooooooo boooooooooooorrrrrrrrrrrrrrrrrrred… 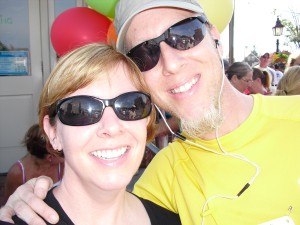 I think the best part of us is that we both love the other one at face value.  There’s never been any secret agendas to get the other one to change.  There’s never been any animosity about anything.  We have the occasional snarky session when one or both of us is tired or cranky but we’ve never had an actual fight!  It’s remarkable.  Thankfully we’re both good communicators, and we talk about everything, so there’s rarely any surprises.  And we’re both good about asking the other if there’s anything on their mind, or anything they want to discuss. 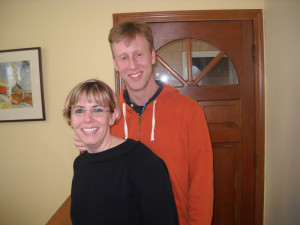 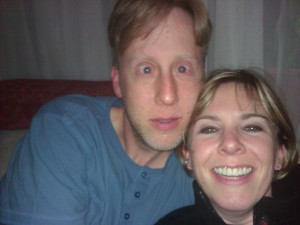 We’re having our friend Torrey over for dinner tonight, even though it’s Valentine’s Day.  I told Jim yesterday “I don’t mind if she comes on Valentine’s Day – EVERY day with you is like Valentine’s Day!!!”  Totally corny… but totally true! 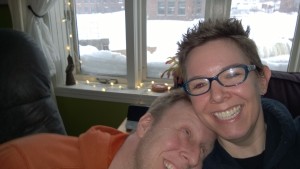 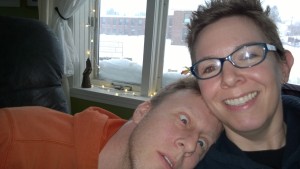