Skip to content
Or:  WHY I HATE MINKA-AIRE SMART RECEIVERS!

So basically, one fan needs to be connected to power at any given time while the rest are disconnected, in order to program the “smart receivers”.  They were obviously not designed for fans that share a circuit breaker. 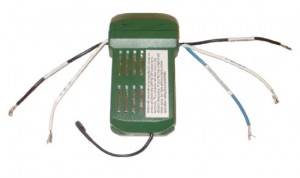 [1] adjust the “dip-switches” on the remote control, [2] turn off power to the fan, [3] turn power back on, [4] within 60 seconds of power being turned back on, press the “stop” button on the remote for 10 seconds while pointing it at the fan.  This will apparently “lock in” the frequency of each remote control with it’s corresponding fan receiver.

In case you don’t know what dip-switches are [I didn’t], they’re on the back of the remote in the same compartment as the battery, and look like this: 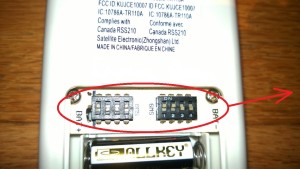 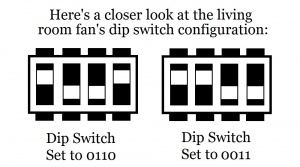 Then we tried what I’ll call the “ALL FANS AT ONCE” plan:

Then we regrouped and tried the “ONE FAN AT A TIME” plan:

I ran down to the basement, killed power to circuit breaker #5, counted to 20, flipped it back on, yelled up to hubby and he pointed the master bedroom remote at the fan while holding “stop” for 10 seconds.  Then he tested the remote and it worked for the bedroom fan!  Success!!!  So I killed power to circuit #5 again, counted to 20, flipped it back on, and he moved into the girl cave and held “stop” for 10 seconds.  He tested that remote, and it worked!  But then he tried the bedroom fan remote, and it did nothing.  The girl cave remote now controlled all 3 fans.

Hubby did some online research and some consultation of the instruction manual regarding remote controls.  His conclusion [since the manual mentions the frequency of both the “transmitter” and the “receiver”] was that I had overlooked dip-switches on the remote control receivers while installing them at the ceiling, and we’d simply have to take the receivers down and match the receiver dip-switch settings to the remote control dip-switch settings.  Sounded logical to me, although I had read that Minka-Aire “Smart Receivers” don’t have dip-switches… but I decided to roll with hubby’s theory.

So the following day, I killed power to circuit breaker #5, hauled my ladder into the living room, disconnected the receiver from the ceiling and the fan, and handed it to hubby.  He inspected every square inch – even opened it up to look inside at the circuit board – no dip-switches.  Gah!  I was so frustrated I put everything back and called it a weekend.

For the next few days, I did MORE research on Minka-Aire “Smart Receivers” [which I was starting to hate at this point].  It seems that in houses or facilities with more than one Minka-Aire fan [of the same model?] you have to disconnect power from each FAN – like at the ceiling – not just at the breaker.  And then do the point-and-hold-“stop” on the remote control thing with each fan, one by one, while the other 2 are disconnected.  AKA:  connect one, disconnect 2.  Reconnect one, disconnect another.  Round robin until all 3 have been connected to power while the other 2 are disconnected.  Are you KIDDING ME???

So a few days later, on a Wednesday after work, I got a burst of energy and embarked on the “ARE YOU KIDDING ME?” plan.  I had 2 hours before kick boxing and figured it would take an hour max:

Run down 2 flights of stairs to basement, flip power back on, run back up 2 flights to master bedroom, grab remote, and hold “stop” for 10 seconds while pointing it at fan.  Run back down 2 flights, kill power, run back up 2 flights & reconnect girl cave fan to ceiling power.  Haul ladder into master bedroom, extend to max length to reach scarily-high fan nested in vaulted ceiling, climb up, & disconnect fan from ceiling.  The girl cave fan is now the only one connected to power:

Run down 2 flights to basement, flip power back on, run back up 2 flights to girl cave, grab remote, and hold “stop” for 10 seconds while pointing it at fan.  Haul ladder back into girl cave, climb up & disconnect fan from ceiling.  Now all 3 fans are disconnected.  Haul ladder downstairs to living room, climb up, & connect fan to ceiling.  The living room fan is now the only one connected to power:

Run down to basement, flip power back on, run back up to living room, grab remote, and hold “stop” for 10 seconds while pointing it at fan.  Run back down to basement, kill power, head back up to living room, grab 40 pound ladder and haul it back upstairs to girl cave.  Climb up & reconnect fan to ceiling.  Haul ladder back into master bedroom, re-extend to max length to reach scarily-high fan nested in vaulted ceiling, climb up & reconnect fan to ceiling.   Now all 3 fans are re-connected.  PHEW

As a final step, run back down to basement, turn power back on, and head back upstairs to relish in the success of each fan having it’s own working remote.  Except that’s not what happened.  The living room remote, once again, controlled all three fans…

So, after TWO HOURS of running up & down stairs and ladders, hauling my 40 pound ladder around and extending it up and down [which is a lot of work on the arms!], I was a complete sweaty mess and no closer to solving the problem of the remote controls.  I was SO pissed off.  I wanted to throw the smart receivers into the river and maniacally laugh as they floated away.  Instead, I went to kick-boxing and worked out most of my aggression.  When I got home, I explained my dilemma to hubby.  He assessed the situation, and in a very logical, calm voice said “so… when you were up on the ladder, did you disconnected power from the receivers, or just from the fans?  Is there a chance the receivers were still connected to the ceiling power?”

Me:  stunned silence.  Followed by:

Hubby hugged me and said “next weekend, together, we’ll go through the whole song and dance routine AGAIN, and disconnect the receivers from power, and get the fans and remotes working properly”.  He’s awesome.  But OMFG!!!  I want to punch whoever connected our 3 fans to the same circuit breaker.  Obviously it’s not a common thing, or Minka-Aire wouldn’t have made “Smart Receivers”.   Smart receivers + lazy electrician = lots of #^%*@ angst.

I do feel slightly thankful, though.  My life mantra is “it could always be worse” and every day I remember to be thankful for all the things I DO have, like a roof over my head, an awesome husband, a great job, food in the pantry, a car that works, warm clothes for winter, etc.  When I was researching “Smart Receivers” I came across a couple of far worse situations:  One man lives in a housing complex.  Each unit has a Minka-Aire fan, but they all share the same circuit, so the remote in one unit controls the fans in ALL the units.  The man’s fan turns on and off all willy-nilly, so he does his best to just ignore it.  Another man lives with his son in a condo.  They each have a Minka-Aire fan in their bedroom, but they share a circuit and the son’s remote controls both.  So the man will be sound asleep, then jolted awake as his fan powers up when his son gets home at 2am.  He doesn’t know how to do basic electrical, and doesn’t want to pay for an electrician to come fix it, so he’s SOL [he needs to find himself a DIY wifey!].

So 2 weekends ago I spent THREE hours going through the entire process all over again, but this time disconnecting the receiver from the ceiling, which is a lot more work than disconnecting the receiver from the fan, since it means accessing the brittle copper wires in the ceiling box, using all my strength to pry them down from the ceiling box, and dealing with electrical tape, and fan receiver wires that pull away from the wire cap & electrical tape when I’m trying to shove the whole mess back up into the ceiling box.  So all told, I spent FIVE HOURS of my life trying to fix a stupid problem that would have been a piece of cake if the receivers were dumb and had dip-switches I could match to the remote control dip-switches.  That’s how ceiling fan receivers worked up until recently.  Much better solution than “Smart Receivers” for people who’s fans operate on the same circuit breaker!!!  At least it’s finally DONE.

I hope everyone had a Happy Halloween!

It’s been about 4 years since I wasted 5 hours of my life.  All 3 fans are still working awesomely, each with it’s own remote.  So if you’re able to follow my instructions, it’s WORTH THE AGGRAVATION to have each fan controlled by it’s own remote.  But I still hate Minka-Aire Smart Receivers!!!