The fish babies are no longer babies!  Up until recently our 9 remaining “babies” were all girls, but a few days ago one turned into a boy and 2 more appear to be heading that way.  Apparently that can happen with Mollies a few months after they’re born.  I’ve been very vigilant – we don’t need more fish babies!  They are currently housed in 3 tanks on the counter – one to the left of the sink and 2 to the right.  To the left is the “Definitely Girls” tank.  To the right is the “Probably Girls” tank, and then the  “Lonesome Boy” tank [his blue night light is on]: 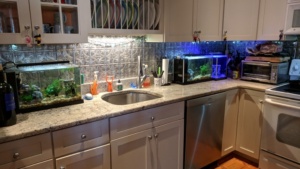 Darwin kept marching across the counter standing in front of whatever tank I was trying to take a picture of.  He wanted to make sure I knew they were his fish.  The boy fish was very cooperative and friendly: 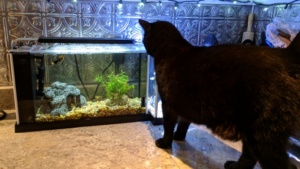 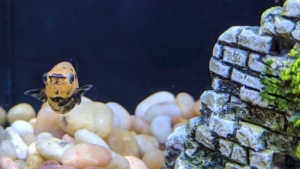 Up until last week the fish babies’ Dad lived in the small tank [the Mom died months ago after popping out baby #16].  But he died last week so I cleaned the tank and put it in storage.  Only to have to get it right back out to accommodate the new boy.  The tanks are so close together that the fish can see each other.  It’s fun to watch them zoom up and down the glass in tandem: 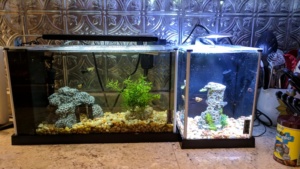 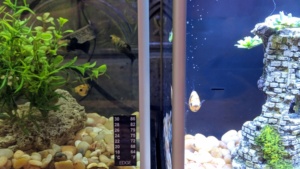 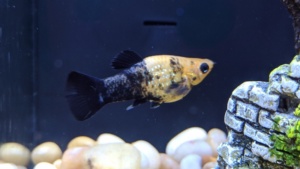 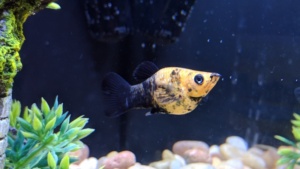 Each tank has it’s own Zebra Nerite snail.  I love watching their ratchet-teeth working to scrape algae off the glass.  They’re so pretty when they turn and ripple their mantel as they climb onto the rocks: 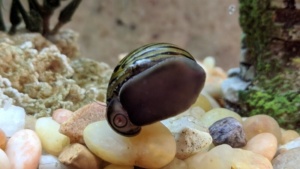 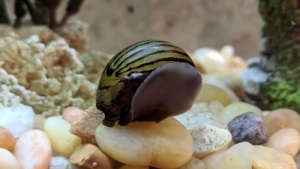 The 4 fish that are definitely girls are much larger than the boy.  You can see they have a definite FIN under their butts, versus the barb: 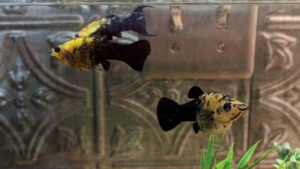 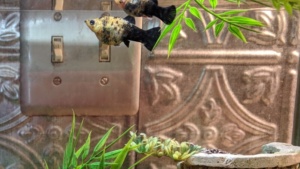 One of the girls has a very pretty fan tail: 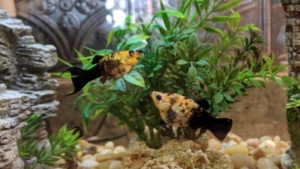 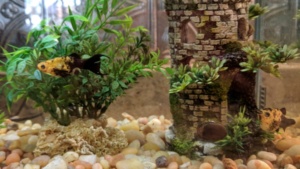 In the lower right of the last picture you can see the girl I’ve nicknamed “Jumbatron”.  She’s huge and fierce!  She races up to the glass and acts all aggressive when we approach the tank.  Thankfully she doesn’t bite her sisters [often].

In other news, last Thursday it was 70°!  The beaver was out doing beaver things all day: 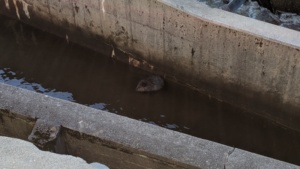 I tried to drop some romaine lettuce and celery in the water near him but he slapped his tail at me.  I saw a man leaning over taking pics and the beaver slapped his tail so hard he covered the man in a shower of water.  Hopefully his camera was OK!

I also finally did some work today on my chameleon mural: 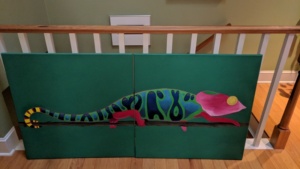 It obviously needs a lot more work, but I like the yellow eye background color.  The last time I worked on it was last August, before I got sick for 4 months.

And in Birdie news, she has become a complete couch cat.  She even sleeps on the couch all night [and Darwin sleeps on the ottoman about 5 feet away!].  After poor Bonkers died she discovered the awesomeness of the bed: 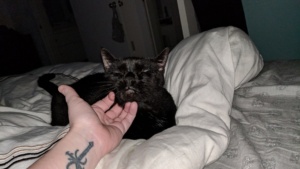 But now she’s decided the down comforter on the couch is waaaaaaaaay better.  Last week was the first day she jumped up with me – I was SO shocked and SO HAPPY!!!  I was laying down watching the Olympics and she meowed, then launched herself up.  I could just see her brain going “O M G !!!” as she kneaded and purred and head-bumped me.  She settled down and we cheered on the skaters, particularly our hero Adam Rippon: 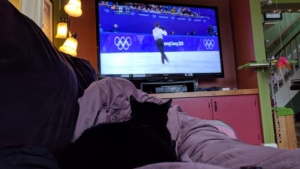 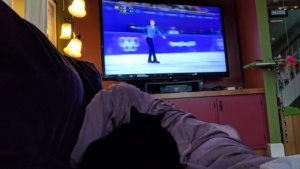 The couch was always Bonkers’ domain.  Every night he’d snuggle on my chest and drool and purr while I watched TV.  But now that Birdie is blossoming into a fierce female, she’s claiming the couch as her own.  I love it!  Here she is this morning and this evening: 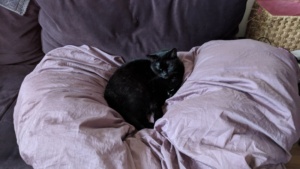 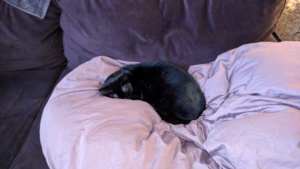 She did get down a few times.  Around lunch time she was walking towards the kitchen and Darwin [who loves to sneak attack her and is trying desperately to get her to play with him] launched through the air and landed right in front of her.  She stopped walking, laid her ears back, slowly sat down, and then hissed very loudly straight at his face.  He slowly and carefully backed up and left the area.  Smart boy and good girl 🙂