Aka, we finally found the light switch that controls the outlet on the deck!  A couple of months ago hubby put a bee in my bonnet [funny expression] about a hidden switch that controlled the outlet above the deck.  The outlet is tucked up under the eaves of the roof, and wasn’t even on our radar until our deck was built in late 2014.  And then I never really paid attention to it until I was trying to hang Christmas lights on the deck this past December: 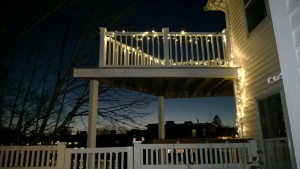 The outlet wouldn’t power the lights so I had to drop them down to the yard plug.  At some point around then, hubby said he thought he remembered his painter covering over a switch in the bedroom that didn’t do anything [he had the walls painted right after he moved in].  We were thinking it probably controlled the deck outlet *nods*.  So this past weekend I started slicing into the bedroom wall where he thought he remembered seeing it: 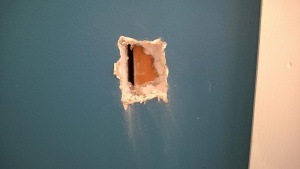 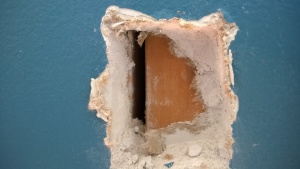 All I found was framing.  I started slicing straight up about 12″…: 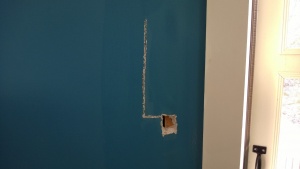 …before deciding it MIGHT be smart to consult the condo pics my father-in-law took in 2009 when Jim first bought the condo [I should have probably done that before starting to cut, but I sort of jump at any chance to cut holes in the walls].  I figured if the hidden switch was there, Pop’s pics would show where it was.  What we discovered is there was no switch on that wall – d’oh!: 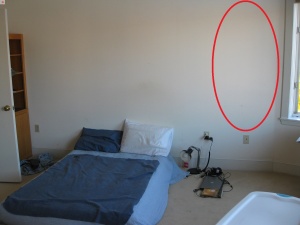 That meant one of the existing switches in the house must control the deck outlet.  But which one?  Only one way to find out.  I grabbed the first set of string lights I could find [Walking Dead zombie heads]: 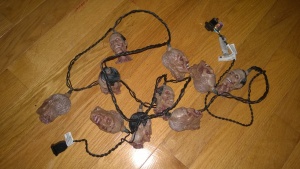 And hauled them & my ladder out to the deck.  I climbed up & plugged them in: 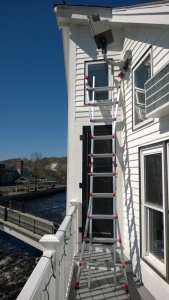 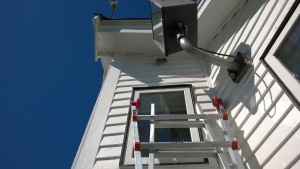 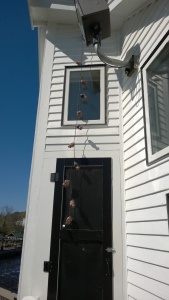 [That big, ugly, spotlight thing is a decades-old relic & will be coming down this summer]. 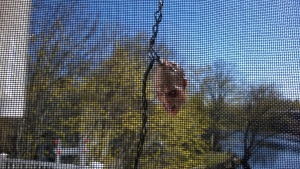 Then it was just a matter of waiting until dark to start testing switches.  While I waited, I patched the bedroom wall.  It was pretty much the same process as when I patched the kitchen wall last month.  I used a drywall screw to re-attach the square I’d cut out: 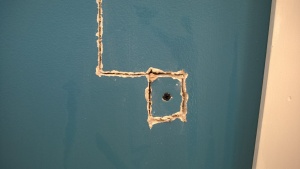 Then used drywall tape and joint compound to fill in the hole & the slice: 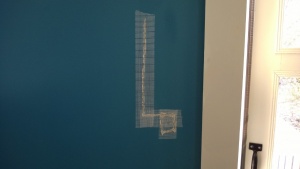 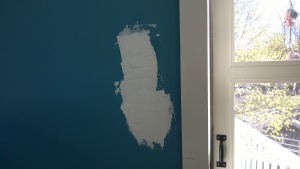 This weekend I’ll sand down the joint compound and paint.

Once it got dark, I stood out on the deck while hubby started flipping the mystery switches in the house.  After a few minutes, the zombie heads lit up – woohoo!: 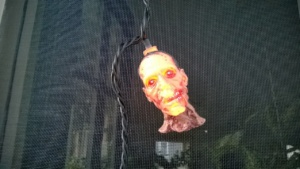 Turns out it was the 2nd living room mystery switch.  So I labeled it: 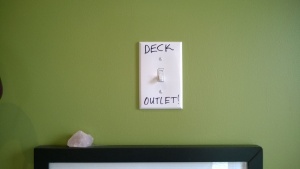 The 1st living room mystery switch, which had been a mystery since I moved in, ended up controlling the back yard lights which I installed last June: 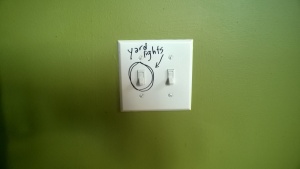 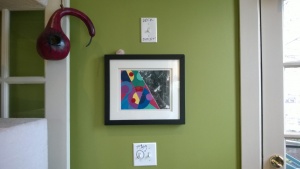 Now we only have 2 more mystery switches, both in the bedroom.  Someday…

It was kind of fun sleeping with zombie heads outside the bedroom window & door: 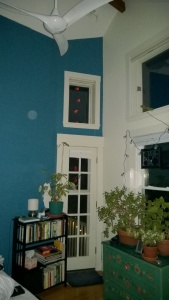 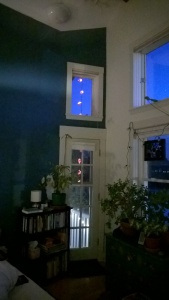 I climbed back up and unplugged them Monday after work because rain was coming and I didn’t want them to get wet.

Here’s the zombie joke that won over my [vegetarian] husband on our 2nd date:

Q – What do vegetarian zombies eat?