I won’t say hubby almost burned the house down, because nothing actually caught on fire.  He just got a scare this past August when the outdoor electrical outlet shot flames at him as he unplugged his motorcycle charger.  I was upstairs reading and he called up “wifey, can you please come help me with something?”.  I went downstairs and followed him out to the yard where he showed me the charred outlet: 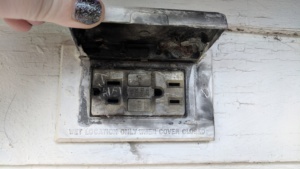 YIKES!  I immediately went down cellar, shut off the circuit breaker, grabbed my electrical “go bag” and headed back outside.  I removed the cover [which took some work – it was basically painted onto the house] and gently pulled the wires out from the wall.  All charred.  So scary!: 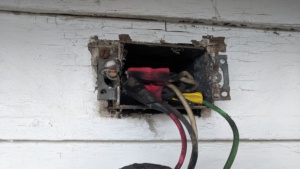 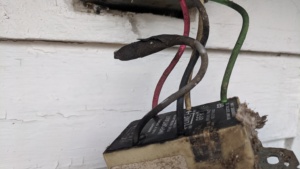 Here’s an over-exposed closeup [my photo skillz were about on par with my blog skillz this summer, although I guess I should be glad I had the foresight to take photos]: 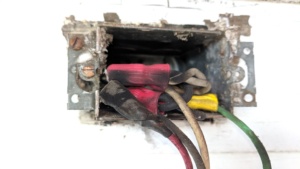 My biggest worry was smoldering behind the electrical box.  I unscrewed the box and pulled everything away from the wall.  The insulation looked a bit charred, but the black might just be because it’s old.  Thankfully there was no smell of burning and everything was cool to the touch: 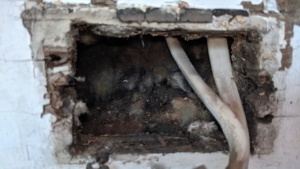 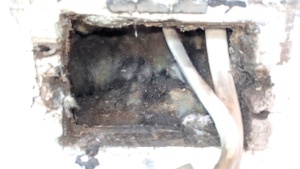 I pushed the electrical box back into the wall & secured it with electrical tape: 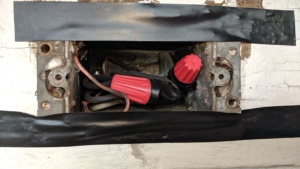 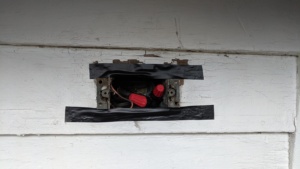 Then borrowed a plain/solid outlet cover from the bedroom & added more electrical tape: 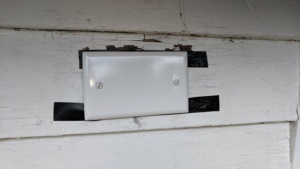 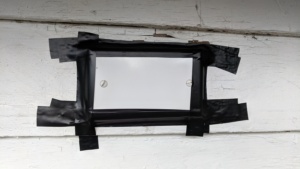 Good enough for now.  At some point I’ll probably replace it, but we never really ever used it, so for now it’s fine how it is.  And it’s up under the catio so it doesn’t even show.  Thankfully the flames that shot out didn’t ignite the catio!!!  OMG NIGHTMARE!: 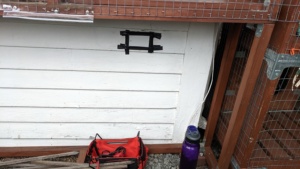 We have no idea why the outlet exploded.  The motorcycle charger is fine when it’s plugged into the front hall outlet.  And hubby unplugs things correctly [aka he doesn’t yank on the cord, but instead pulls the head of the plug].  I believe the outdoor outlet was just old and damp from neglect.  Like everything else that sits unused, it slowly decayed.

PS – I still haven’t replaced the solid outlet cover in the bedroom.  In the meantime I covered it with clear packing tape so spiders wouldn’t climb in… shudder spiders… but what is with all the hair stuck to it now?  Seriously?  I didn’t even see it until I looked at the photo on my computer.  Gross!  I think it used to be a phone outlet. 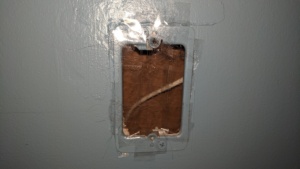 PSS – OMFG I just noticed the giant spider in the upper right corner of my feature photo!  I didn’t notice that but the pic is blown up so big in the header space that all I can see now is SPIDER!!!  OMG!!!