One of the things on my 2016 Projects list is to paint the border of the 3 way-up-high windows on the back of our house: 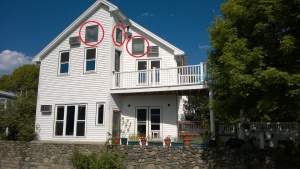 I want them white to match the 9 replacement windows we had put in last August.  We chose not to have the upper 3 replaced because it would have added another $3900 to the cost [for some reason non-opening “picture” windows cost twice as much as regular double-hung windows].  This past weekend I painted the 2 over the deck: 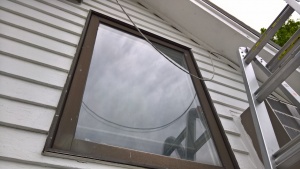 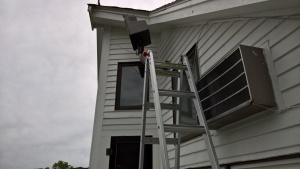 I love my Little Giant ladder: 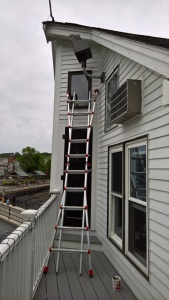 Despite the photo, I actually found I could reach the windows just fine with the ladder set up into an A-frame, which is safer: 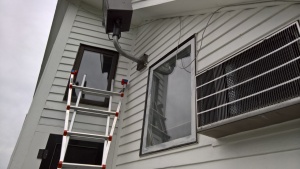 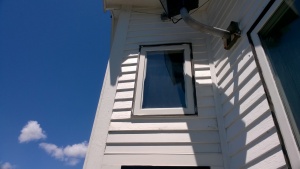 I painted the frames with 2 coats of BIN primer followed by 2 coats of exterior white.  Then I used a razor blade to scrape the excess paint off the glass.  Looking down wasn’t a good idea – it’s a LONG drop down to the old fish ladder!: 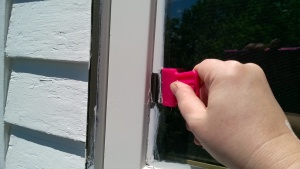 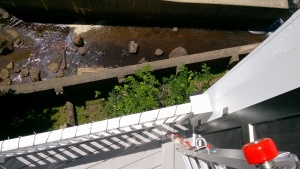 They came out great – if you look at the pic on the right, they pretty much match the frames of the 9 replacement windows: 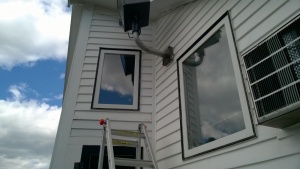 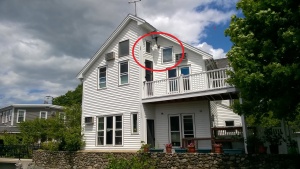 But then I noticed how UGLY the air conditioners look.  So I thought “why not paint them, too?”.  The one over the deck was easy.  I used Stix primer and white exterior paint for the sides and bottom, and off-white spray paint for the front [not sure if that’s a smart idea, but I couldn’t find anything on the internet that said *not* to do it…]  Here’s a before & after: 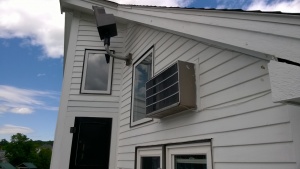 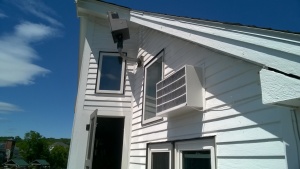 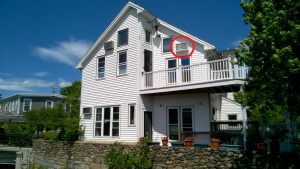 The downstairs one [in our living room] was a bit trickier.  In order to reach it you either have to set up an extension ladder in the old fish ladder down below the house, or stand on the stone wall directly below the AC unit – which would be optimal, except the stone wall has a slanted cement topper where it connects with the house.  Hell to the No!

There’s always been an old extension ladder in the basement, which is in 2 pieces.  I thought maybe one piece would be tall enough to reach the AC unit, but that didn’t work [if you look closely in the first picture, you can see it way over on the left].  Then I realized that miraculously a newer and intact extension ladder has appeared in our basement [I’m guessing it belongs to the contractor who owns the 3rd condo].  I didn’t think he’d mind me using it since it’s pretty old and beat up, so I hauled that out and down into the fish ladder.  Much better: 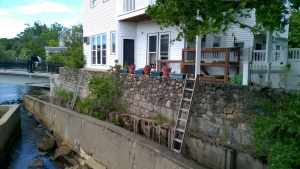 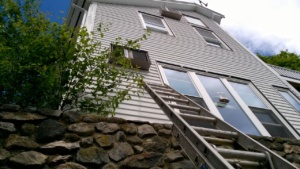 Before hauling it down I needed to learn how to use it, so I lay it flat in the driveway and was able to easily extend it out fully.  But then I couldn’t get it to close.  The rung locks kept blocking it’s progress backwards.  I even googled “closing an extension ladder” but apparently it’s such an easy task that no one has a tutorial… I finally learned [thanks to YouTube] that if you do it fast, the rung locks will fold inwards and allow the ladder to close.  Thank you!  After a few attempts I got the hang of it.

So anyways.  Once I got it and myself into the old fish ladder [which is a dry bed of rocks and dirt mostly] I extended it upwards towards the AC unit and it REACHED!  The hardest part was anchoring the ladder securely on the dirt and rocks.  I finally used a bunch of stones and a piece of heavy metal I found to pack the feet tightly so they wouldn’t move.  Painting the right side, bottom, and front of the AC unit was easy: 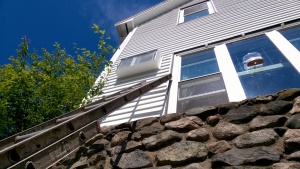 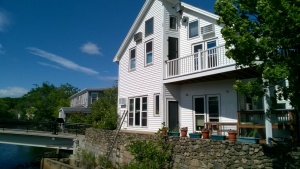 But I would have had to lean too far to the left in order to safely reach the left side, and I couldn’t get the ladder re-anchored, so I took a different route:  I bush-whacked my way through the thick shrubbery on the side of our house and stood on the stone wall [the part that isn’t slanted!]: 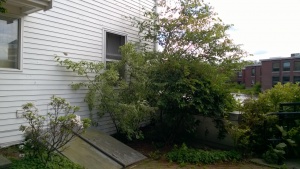 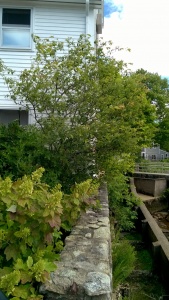 It was worth it in the end, it came out awesome and you can hardly see it! 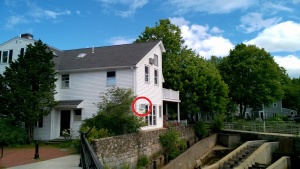 Now I just need to figure out how to paint the 3rd AC unit, and the 3rd window frame.  There’s no way I’m getting an extension ladder that tall – too dangerous.  And I’m not going to dangle from the roof like Mission Impossible no matter how fun that sounds.  I think I have to wait until our house is painted again and ask the painter dude to do it for me *nods*. 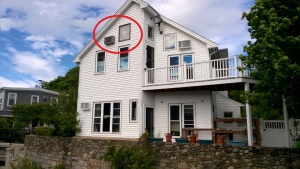