I was home from work yesterday on a much needed vacation day.  Unfortunately it was POURING rain all morning, so I was stuck inside and couldn’t work on my outdoor “catio” cat enclosure.  I got a little bored and decided to declutter the house a bit.  I came across a cardboard box the perfect size and shape for a rat club-house so I zip-tied it to the top of the rat cage.  Nibbler was quite excited – she loves club houses: 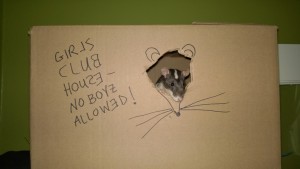 Then I headed upstairs and re-discovered the large disco ball I’d bought a while back but never hung up. I could never decide what part of the house would benefit from it the most: 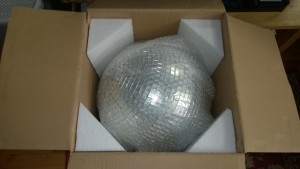 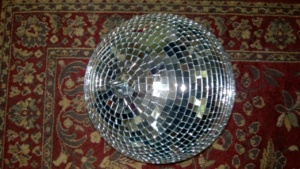 But yesterday I decided it was DEFINITELY the upstairs hallway nods [it was either that or the bedroom, and I thought a disco ball over the bed might be a bit tacky…].  The upstairs hall has a wooden beam running the length of it, just perfect for a dangling shiny orb.

Unfortunately we have 15′ ceilings upstairs, and the beam runs along the apex.  It took me a few tries to get my ladder set up so I could reach the center of the beam [the center above the floor].  Attempt #1 was setting it up in an A-frame shape.  That didn’t work at all.  Wasn’t high enough.  Attempt #2 was to extend it out straight to a length of 12′ and position it against the wall near the beam: 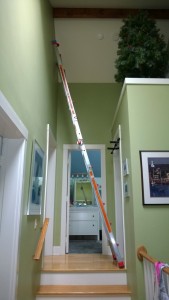 I climbed up with my drill and could reach the beam if I leaned backwards with my drill arm fully extended, but realized I wouldn’t have enough leverage to screw in the metal hook: 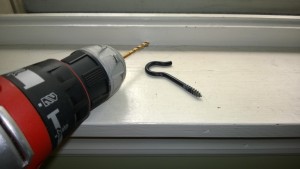 Meh.  After THIRTY MINUTES of swinging the ladder around every which way [that fucker is top heavy and quite hard to maneuver without it toppling over [which it might have done a few times, with me underneath it one of those times – ouch], I finally realized I had to position it straight up and down, with the feet on the step directly beneath the beam and the top jammed against the beam.  There’s not much wiggle room up there since the ceiling on either side of the beam is angled pretty steeply.  So I had to hold it at a 90° angle, directly under the beam, then simultaneously release the side clips [that let you extend or shorten the length], extend the ladder up an additional 2′ [until the top was nestled against the beam], and re-engage the clips.  OMG.  It took way more core and arm strength that I knew I possessed, but I did it! 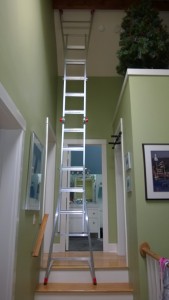 And if you’ll notice, the beam is actually on THIS side of the ladder, which meant I had to climb up THIS side of the ladder, which is actually the back side/underside of the ladder, which meant I had to grip it like a monkey since gravity kept trying to pry me off.  That wasn’t fun.  Not at all.  No No No.  It took exactly 6 minutes to climb up the ladder [with the cordless drill jammed down the waist of my shorts], drill a pilot hole in the beam, screw the hook into the beam, climb down, get my breathing under control, grab the ungainly disco ball, climb back up towing it behind me, hang it from the hook, and return to earth.  Then I sat on the floor until my heart rate returned to normal and the shaking stopped.

But the frustration and terror was all worth it.  Because:  DISCO BALL! 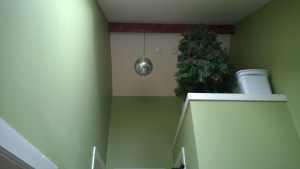 It actually looks kind of small in that picture, but in person it’s magnificently huge.

Then I had to scramble because a man from Rite Window was coming at noon to discuss our crank-out window situation [refer back to this post about our 47° living room last winter] and tell us whether we are good candidates for replacement windows.  We are – yay!  They’re planning to replace 10 of our 13 crank-out windows, which are all on the back of our house, facing the river [provided we get approval from the town of Ipswich… I submitted a building permit application this afternoon]: 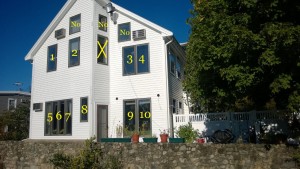 Windows 1 & 2 [Master Bedroom], 3 & 4 [Girl Cave], 5 & 7 [Living Room], and 9 & 10 [Dining Room] will be replaced with double-hung sash windows to match what is already on both sides and front of the house.  Windows 6 & 8 will be picture windows [i.e. just solid glass] & won’t open.  The window with the big X is now the door leading out to our deck [this picture is obviously pre-deck], and the 3 windows way up top with “No” written on them we decided to leave as crank-out windows.  We never open them, and they’re not drafty, and it would have cost us an additional $4200 to convert them to picture windows, so… no.  The estimate for the 8 double-hung sash windows + 2 picture windows came to $7500 which seems fair, considering they’re going to have to tear the existing crank-windows completely out before replacing them.  And they’ll have to set up their ladders in the old fish ladder below the wall in back of the house to reach windows 1, 2, 5, 6, 7, & 8.

After the guy left, hubby headed back to work [he came home for the consultation – thank you hubby!] and I decided to start chicken-wiring the cat enclosure.  Here’s a sneak peak: 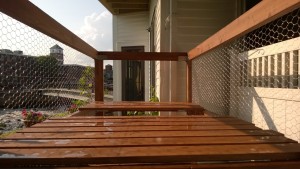 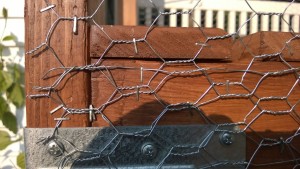