Holy cow!  After the fiasco that was [and still is] the ceiling fan replacement in the master bedroom, it’s amazing to actually do something DIY related that was not only QUICK but also EASY!  mind blown

Between my 1st & 2nd cups of tea this morning, I managed to upgrade the controls for our bathroom shower fan from a switch to a timer: 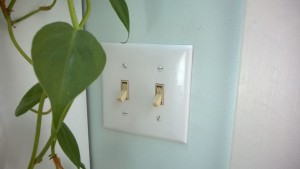 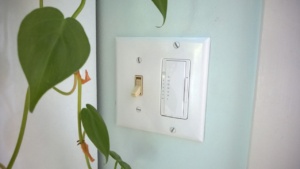 How amazing is that!!!

My husband had mold issues in the past [at previous apartments, not here at the condo], so he likes to leave the shower fan running for at least 15 minutes after each shower.  Which means on work days it’s running all day since he leaves for work right after showering [I shower first and leave when he does].

Last Spring I took a Basic Home Repair class at the local voc tech high school, which covered basic electrical.  My husband suggested a good practice exercise for me might be swapping out the shower fan switch for a timer.  I asked my professor and he assured me it would be a super easy project.  But I’ve been dragging my feet on electrical issues.  Mostly because, well, electricity is SCARY!  But after separating the ceiling fan wires from the ceiling the other day, I’ve had a burst of electrical confidence.

So yesterday I drove up to Home Depot [I HATE shopping, and i hate errands, but every now and then I need to see things at the store instead of ordering them online].  It took me a long time to locate the timer switches, because I was expecting something round with numbers on it, not a cool looking rectangle with LED lights.  They really only had one to choose from, so that’s the one I bought: 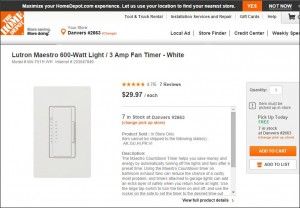 This morning, as I sipped my 1st cup of tea, I opened the packaging for the timer switch and read through the directions.  It did look super easy!  Basically I’d just need to copy the configuration of the existing wiring, and splice the existing ground wire with the one attached to the timer switch.  Piece of cake!  Mmmmmmm… cake…

STEP 1:  Turn off power to the switch at the breaker box & gather the necessary tools: 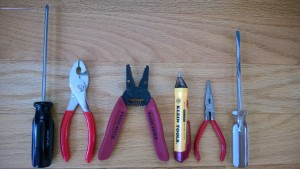 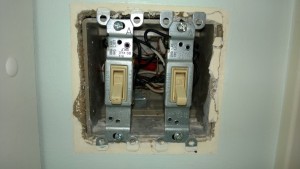 STEP 3:  Unscrew the switch receptacle from the electrical box & gently pull it [and it’s attached wires] away from the wall.  It’s a good idea at this point to use a voltage tester juuuuuuuust to double check that no electricity is present.  A blue light means no voltage detected, a red light means voltage found: 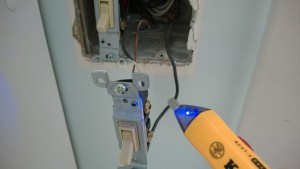 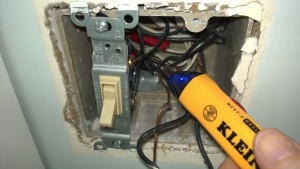 I love my voltage tester [#affiliate]!  I got it on Amazon. It was an invaluable tool when I was mapping our breaker box.

STEP 4:  Make note of where the existing wires are connected, including the ground.  The black wires are the hot wires [or at least they are when the power is turned on!].  My switch receptacle had 2 black wires – one to bring electricity from the basement circuit box to the switch, and the other to bring electricity from the switch to the shower fan.  They were looped around the brass screws on the right side of the receptacle.  The plain copper wire is the ground wire [ground wires are usually plain copper or green].  It was looped around the green screw on the left side of the receptacle: 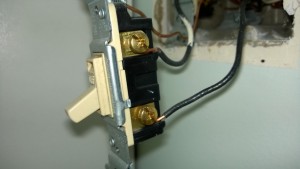 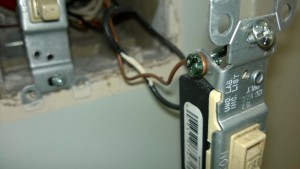 STEP 5:  Loosen the screws holding the wires in place, and gently unhook the wires from the receptacle: 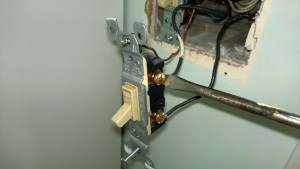 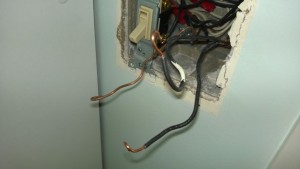 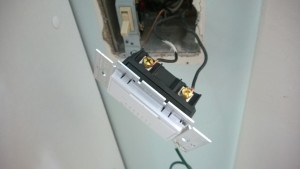 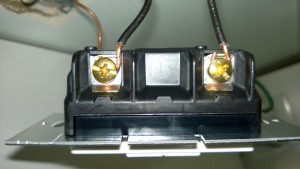 STEP 7:  Splice the copper grounding wire from the old switch receptacle to the grounding wire on the new timer switch receptacle.  I used needle-nose pliers to straighten the loop on the end of the existing grounding wire, wrapped the end of the new grounding wire around it, then screwed on a wire nut.  When splicing two wires, make sure you wrap them together in the same direction as that in which the wire nut will be screwed on.  This ensures the wires will be drawn into the wire nut’s coiled metal insert and squeezed together as you tighten it, instead of pulled apart.  I learned that at school too: 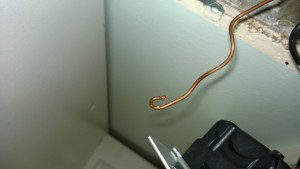 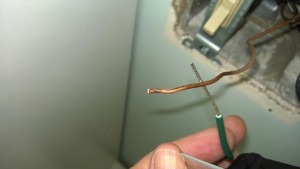 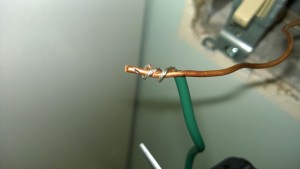 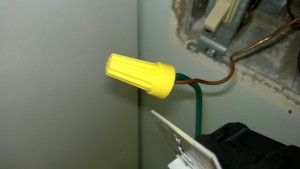 STEP 8:  Push the timer switch receptacle back into the wall box, making sure to tuck the wires gently in behind it first.  I found that in order to get a good fit, I had to snip off the 3 [optional] tabs on the right side of the receptacle: 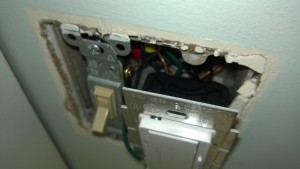 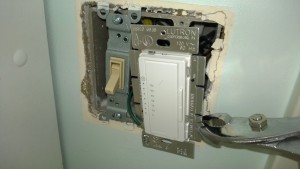 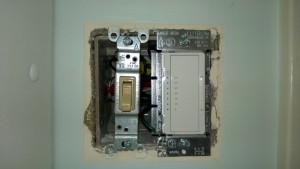 All that was left to do was run down to the basement, flip the circuit breaker back on, run back upstairs, and test the timer switch.  It’s super easy to use – just push the rectangular switch once, then use the small buttons on the right to select the timer length [5 minutes to 60 minutes].  If you want the fan to be on with no time limit, push the rectangular switch two times fast.  So easy!

For me this project took about 45 minutes.  But it was my first time replacing a receptacle, and I was also taking pictures along the way.  I bet next time I could do it in under 20!  At some point in the near future I’m going to be replacing our beige switches and outlets with white ones [the actual switches and outlets – I’ve already swapped out the beige switch plate covers for white ones].  As you can see in the above pic, a beige switch looks like crap surrounded by white 🙂