Why is EVERY D·I·Y project a fiasco?  Every.  Single.  One.  At least that’s how it feels.  Nothing is ever as easy as it looks, nothing ever goes the way you think it will in your head, and there’s always unforeseen problems that take up way more time than they should!

We have 3 ceiling fans.  One in the living room, one in the bedroom, and one in the girl cave.  They are white, boring, borderline ugly, but do a great job so we haven’t replaced them yet.  Until now.  Last night the one in the bedroom stopped working.  We use it almost every night, year round [we have vaulted ceilings & it helps keep the air moving] – so to have it not work is a problem.  I decided “Hey – they’re all the same – I’ll just move the girl cave one into the bedroom – piece of cake!”  HA!  HA HA HA!  Yeah, right.  No cake for me.

This morning I cut power to all 3 fans [I knew which circuit they were on thanks to mapping our breaker box last March] and set up my Little Giant ladder under the girl cave fan.  Then spent an hour, cordless screwdriver in hand, staring at every part of the fan trying to figure out where in the world to start… I finally managed to get the light box & blades removed: 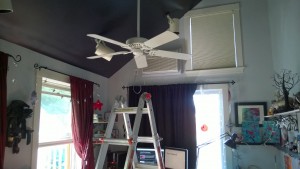 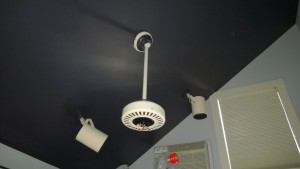 I was hoping I could remove the motor from the downrod thingy and attach it to the downrod thingy in the bedroom.  Not so easy.  Figures.  After much angst I finally realized I had to remove the entire fan from the ceiling, downrod included.  The downrod is attached to a bracket at the ceiling by 3 screws.  2 of the screws came off with no issues.  The 3rd one wouldn’t budge.  Hubby was out on a run so I couldn’t borrow his man power [it irks me that he’s significantly stronger than me, but he is, and I take advantage of it when I need to].  I got impatient and ended up stripping the screw.  %#@*!!!

When hubby came back he tried about 4 screwdrivers but the screw was too far stripped.  I did some online sleuthing and learned that a dremmel tool can be used to slice a deeper groove into the stripped screw, giving better access for a slot-head screwdriver.  Genius!  Especially since my new Black & Decker dremmel tool arrived last month 🙂

Hubby suggested I practice on a similar screw [smart man], so I screwed one into a piece of scrap wood, got myself situated on the living room floor, donned my safety glasses, and let ‘er rip!  The sparks were a little scary [Bonkers fled the area like a bat out of hell], but hubby assured me they wouldn’t ignite the couch, the carpet, me, or the cats: 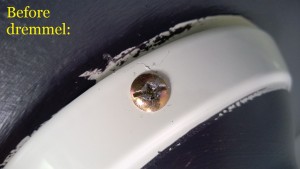 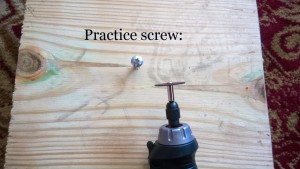 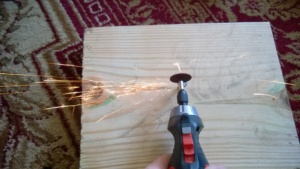 It worked!  The practice screw had a much deeper slot.  So I hiked back up the ladder in the cave with my dremmel tool, and a few seconds [and a lot of sparks] later, the screw had a nice, deep slot: 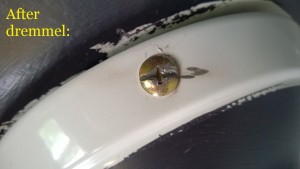 Hubby climbed up and unscrewed it for me [which thankfully worked this time around] and I climbed up the other side of the ladder.  Together we separated the wiring, re-capped the ceiling wires, and took the fan down: 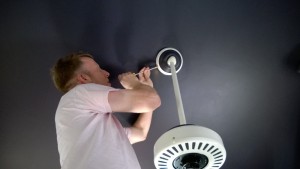 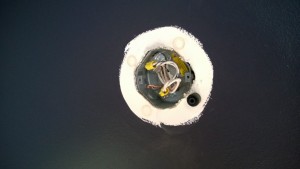 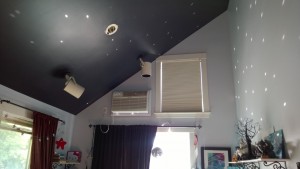 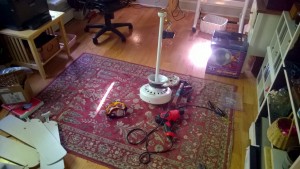 I moved the ladder into the bedroom, set it up under the bedroom fan, and removed the light box & blades.  Then ran into a stumbling block.  NONE of the 3 screws near the ceiling would budge – not even one!  Not with a power drill & not with super strong hubby using a super large screw driver!   %#@*!!! 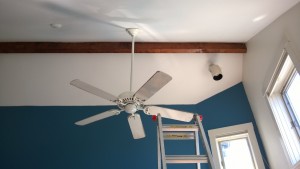 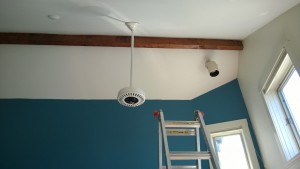 So for the moment, since we don’t want to risk stripping them, we’re stuck *GRUMBLE*.  See?  Nothing is ever easy!!!  N·O·T·H·I·N·G!  Tomorrow we’re going to move the bed and hope that a different angle gives us better leverage to unscrew the problem screws.  As you can see, the ladder is off to the right of the fan because the bed is in the way of getting the ladder any closer.  Moving the bed is a LOT of work, so we’re calling it a day and cracking open the cocktails [Hawaiian beer for hubby, Mike’s Hard Cherry Lemonade for me].