OMG.  I just spent 5 hours mapping the basement breaker box to all the outlets, switches and appliances in our condo.  Holy crap.  I thought it would take 3 hours tops.  Nope.  5 hours.  But at least now I can tinker with outlets if I need to [like replacing the beige receptacles with white ones!] and know which breaker to turn off.  I also have an assortment of voltage testers to double and triple check for any live wires before touching anything [this morning I used a combination of the small red “outlet tester” and the yellow “voltage tester” – I haven’t opened the large, shmancy voltage tester yet – that’ll come later when I’m actually wiring something]: 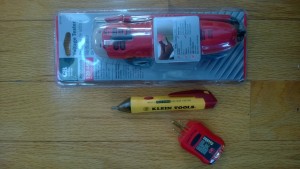 Hubby offered to help me, but I like to do things myself.  At the end of the 5 hour mapping project I did take him up on his offer, because I couldn’t figure out which breaker controlled the master bedroom ceiling fan, the girl cave ceiling fan, the fridge or the garbage disposal.  So with him on his cell upstairs, and me on my cell in the basement, we figured them out via trial and error.  Woohoo!!!

Here’s our breaker box, the 24 circuit breakers, and the original map of what each circuit controls [which has a ton of errors [!!!]]: 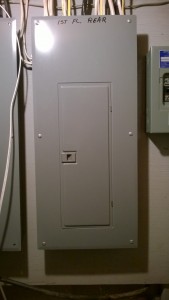 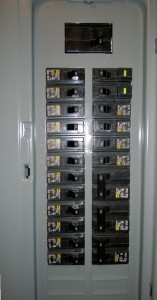 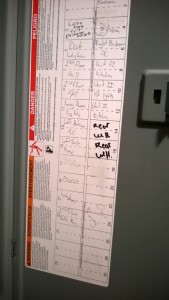 It’s extremely UNhelpful when you’re trying to shut off power to something using the breaker box labels, only to find out you just shut off something completely different.  It’s also extremely UNhelpful that circuits 1, 17, 18 & 20 were labeled with nothing.  Ugh.  I’ll relabel it at some point soon, but at least for now I have the Floorplanner.com maps!

As a side note, it’s a little freaky to me that all the outlets in both bedrooms share one circuit [#4].  That means my desktop PC and Jim’s iron press share the same circuit.  It doesn’t sound like the wisest move…

On the plus side, I realized that circuit breaker #1 was off, so I switched it on and suddenly the outlet in the living room that’s never worked, works!  Woohoo!  It’s strange to me that one circuit controls only one outlet, but whatever.  It works!