In case you missed it, here are the previous links for our 2014 trip to the Big Island of Hawaii:

Sorry for the long delay between posts – my computer died last weekend [the new one arrives next week] and work has been C·R·A·Z·Y with a capital K.  Now I’m sick with some kind of major allergy attack or cold [there’s also a small chance I inhaled an inchworm hanging from a tree on my walk last week, which could account for all the coughing, but the more likely scenario is I’ve caught the blight that’s been taking out my coworkers at record speed. My friend Ted suggested I caught MERS on the plane home from Hawaii shudder].  Whatever it is, it’s making me feel very bleh. 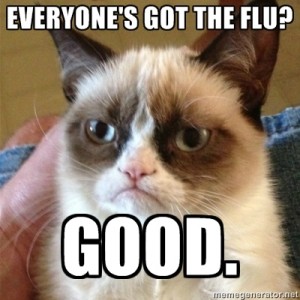 So, back to Hawaii!  After our day trip to Hilo and 3 days of relaxing in Kona we were ready to commit to another day trip.  One I’d been looking to ALL week.  Hell, all year!  I’m not a day-trip/car-trip kind of person, but when there’s a volcano involved – I’m there!  During our swim with the mantas, we asked the woman crewing the boat for advice on getting to Volcanoes National Park.  There’s 3 ways to get there from Kona, none of which are fast or straightforward.  She recommended Route 11, which would take us straight south, along the coast, then SW up into the park.  She also strongly recommended a detour to see the “The Southernmost Point in the USA”.  She told us it was worth the extra hour it would take to get down there and back.

So after waking up a bit later than we planned, we hit the road and followed Rt 11 all the way to… the first coffee shop we could find.  After getting caffeinated, we continued our journey south.  Here’s a map – the red route is our journey to Kīlauea, with a stop at the Southern Tip, and the blue route is our return trip, via the Saddle Road [we kept hearing the Saddle Road was another “must see”]: 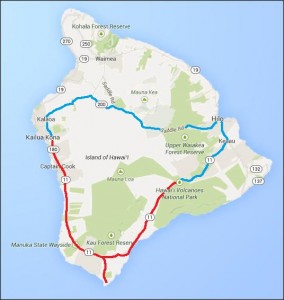 After about an hour and a half of driving, we came upon an incredible sight – a lava field as far as the eye could see – in all directions!  There were huge bands of lava ranging from light brown, to grey, to dark black, with the road cutting through the middle.  We stopped at a lookout point where a sign told us what each color represented:  the black lava is from an 1907 eruption, the grey lava is from an 1887 eruption, and the light brown lava is from an eruption 1,500 years ago!  The light brown lava had some plant and tree growth, but the darker colors did not.  The lava was really sharp and brittle – some had little bits of yellow glass in them [right near my finger in the 2nd picture].  According to Wikipedia, those are most likely bits of minerals [olivine maybe?] fused to the rock when the lava cooled: 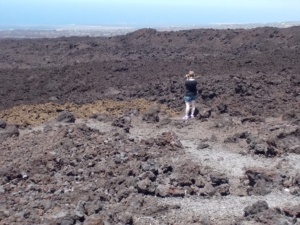 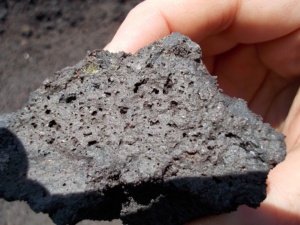 After driving about 10 more minutes we saw the turnoff for “Ka Lae” – the Southernmost Point in the US.  It took about 20 minutes to drive down the narrow road, bordered mostly by farm land and a huge wind farm.  Once you reach the end, it’s stunning!  Large cliffs with panoramic views of turquoise water, distant clouds dotting the horizon, and strong trade winds.  There were a couple of wooden platforms on the edge of the cliff – we were told people often come to Ka Lae for the cliff jumping.  If you look at the ladder in the 3rd photo, you can get an idea of how far of a drop it is!  I lay on my belly on one of the platforms to get that shot.  We were so tempted to jump in… the water looked soooooo inviting – but it’s a long way down!  We also saw a sea turtle lazily swimming by – life is good in Hawaii! 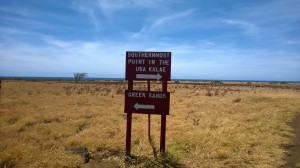 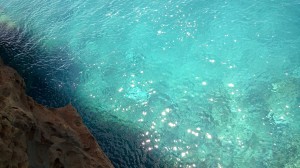 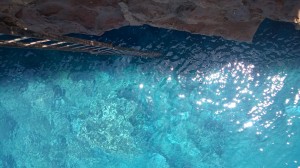 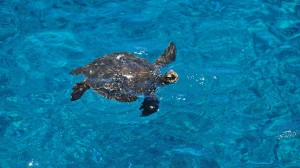 At the Southernmost Point, there’s another road that takes you to a famous green sand beach.  We figured since we were there, we might as well check it out.  But after about a mile we reached a parking lot where a man told us we’d have to park and either hike down to the beach or hitch a ride with his crew in a 4WD vehicle [I’m guessing for $].  We decided to come back another time, as we wanted to get back on the road to Kīlauea!

We reached Kīlauea around 2pm and had a late lunch at the Volcano House Hotel overlooking the caldera.  The food was to die for – they only serve appetizers and desert – gourmet ones at that – I was in heaven!  After lunch we went out to their patio which overlooks the park and volcano: 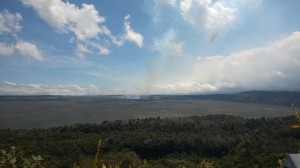 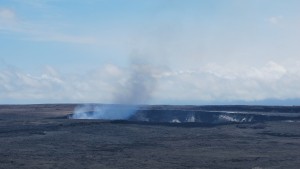 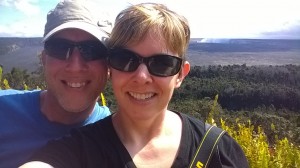 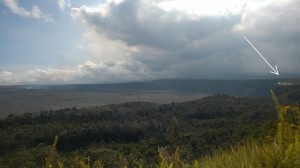 We noticed some enticing towers of smoke coming out of the ground on a rise to the far right [see arrow in photo 4].  We were so hoping we’d be able to get a closer look.  We decided to follow a trail leading from the restaurant patio through some jungley foliage.  After about a quarter mile we came across this: 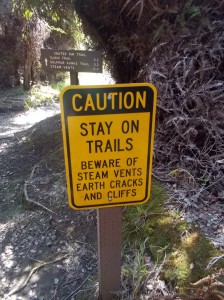 Behind the funny yet scary sign [or is it scary yet funny?] is a trail marker reading “STEAM VENTS 0.4 MILES” with an arrow.  Score!  The whole trail was a mix of beautiful scenery, overlooks of Kīlauea, really cool flowers, and giant holes in the ground with warm steam coming out of them!  It was very trippy.  There were a lot of fences preventing the undoubtedly inevitable toppling of accident prone people like myself into one or more steam vents, but some [I’m assuming the shallow/safe ones] were right out in the open!  If you stood over them it felt like a sauna.  There wasn’t any discernible smell either – just an earthy smell.  The ground was warm to the touch, too!  Such a cool experience: 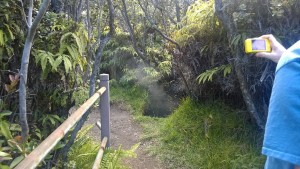 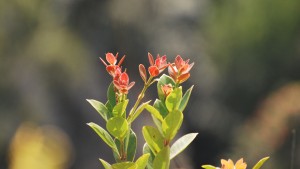 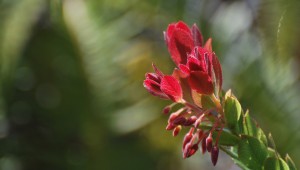 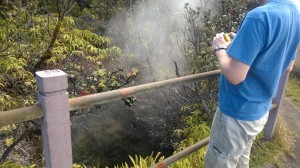 After reaching the end of the trail, and ogling the steam vents lining the perimeter of the platuea, and enjoying the incredible views of Kīlauea, we headed back to the car and drove the 2 miles to the Thurston Lava Tube – something I’ve been looking forward to since I saw it on TV last year!  Lava used to flow through this tube a looooooooong time ago.  The constant flow created a hard crust around the lava, which remained after the flow stopped.  Some lava tubes are very small, but the Thurston tube is probably 8-10 feet high inside.  You can only walk through about 150 feet of it before reaching the stairs that make you get out grumpy face, but it looked like it went on much longer.  Some are 20+ miles long!  Even though it was over too fast, it was still one of my favorite experiences on the Big Island! 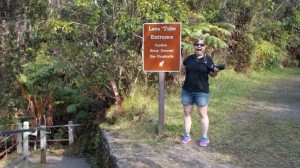 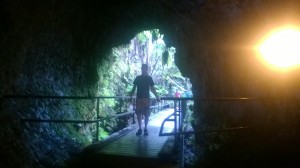 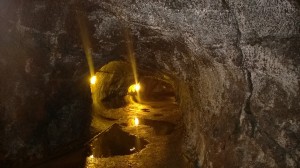 After that, we hit the road for Hilo.  Which seems counter intuitive, since Hilo is on the opposite side of the Big Island than Kona, but the Saddle Road starts in Hilo and ends just north of Kona.  The Saddle Road reaches elevations of 7,000+ feet and slices across the Big Island, through the valley between Mauna Kea and Mauna Loa.  Some REALLY weird stuff grows at 7,000 feet – it was amazing to see: 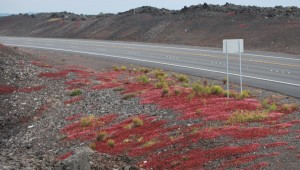 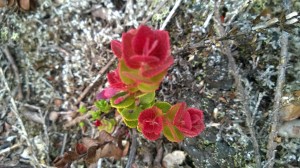 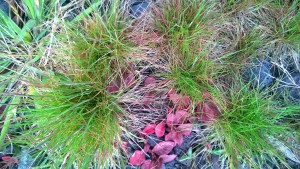 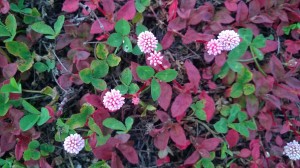 The Saddle Road at sunset was beautiful, and a great way to end our trip. 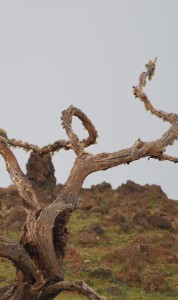 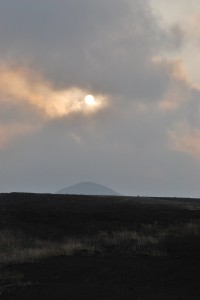 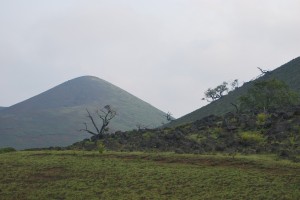 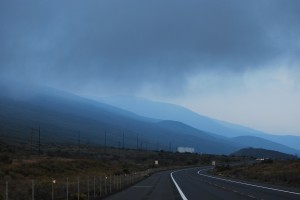 As quoted from a recent Huffington Post article:  “Mother Earth went all out in Hawaii: Bursts of tropical vegetation, unspoiled wonders, and turquoise blue seas are unmatched by any other destination in the world.”  So true!