OMG Hawaii!  We got back Sunday night.  We loved it!  We were in Kona, on the Big Island of Hawaii, for 8 days.  We could have easily stayed forever.  Maybe someday we will 🙂

I realize this isn’t DIY related, but I wanted to document my trip, and by doing a blog post about it, my family and friends can see what we saw!

Here’s a map showing the general layout of the Big Island.  Kona, where we stayed [red circle], is on the far West side of the island.  Hilo [the other major town] is on the far East side.  Mount Kīlauea [the World’s most active volcano] is towards the SE section of the Big Island, inside Hawaii Volcanoes National Park.  It’s been continually erupting since 1983! 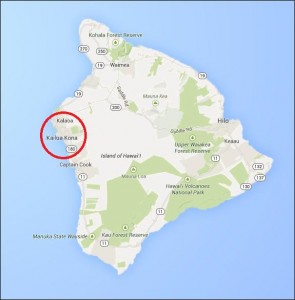 We saw so many amazing and beautiful things.  Among them were beautiful, bright, not-very-shy geckos: 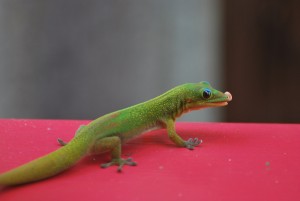 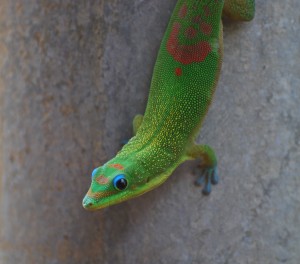 Every morning we had coffee/tea at a different coffee shop.  Coffee shops were everywhere!  Kona coffee is huge.  I had no idea [not a coffee person].  Mid-week we checked out a cute coffee shop up the street from our hotel with a little red deck overlooking the sidewalk – perfect for people watching!  After sitting down we noticed there was a hand-crafted “Gecko Diner” setup on the fence railing.  We asked the shop keeper and she said she puts it out every morning and fills the mini coffee cups with sweetened syrup – apparently geckos LOVE sugar!  We were there about 20 minutes when we noticed a gecko slinking his way down the light pole next to our table.  We remained very quiet and calm, and a few minutes later he jumped onto the little tiny Gecko Diner table.  He eyeballed us from behind the cups for a few minutes, then got brave and started snorkeling ghost ants off the little plate: 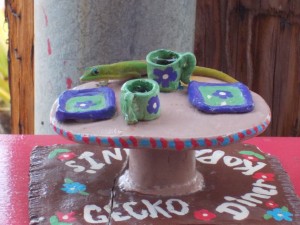 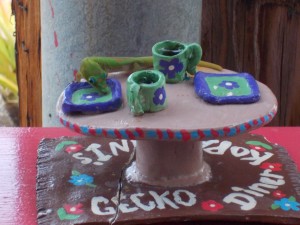 Then he got super brave and drank some nectar.  Look at his little tongue!  SO ADORABLE!!! 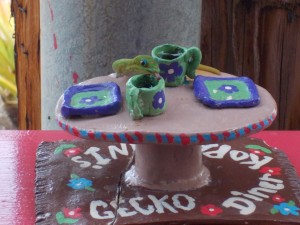 We also saw mongooses!  They were everywhere!  There are no squirrels in Hawaii – instead there are mongooses!  The mongoose was introduced to Hawaii in the mid 19th century in an attempt to control the rat population in the sugar cane fields.  However, mongooses are diurnal [awake during the day] and rats are noctural [awake during the night] so they never interacted – DUH!  Mongooses are very hard to photograph – they are VERY fast, and if they see you they run into the nearest shrubbery.  I was SUPER lucky the last night we were there – I went outside at dusk to get a shot of our hotel room, and spotted 2 mongooses darting into the shrubs.  I decided to sit quietly for a bit, to see if they’d come back out, and they did!  They headed away from me, towards the lobby/driveway area.  I stealthily followed them and got a few great shots!  I totally didn’t expect one to do the standing-up-like-a-person meerkat thing! 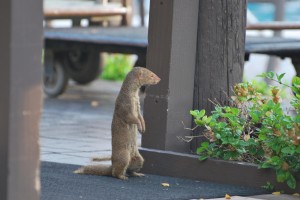 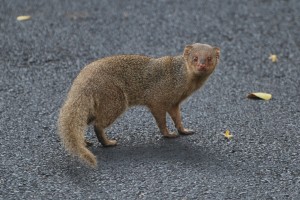 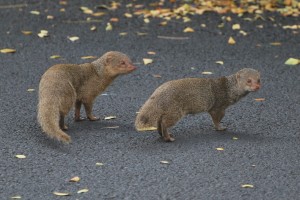 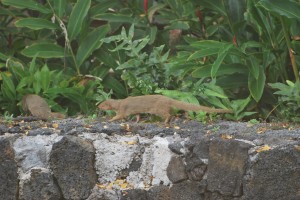 Our 2nd day in Hawaii we took a day trip [in our rental car] up the North Coast on Route 19 towards Waimea.  We had no real destination or time frame in mind, we just wanted to explore.  About 5 minutes into our trip, an alarm sounded in the rental car and the “check tire pressure!” notice came up on the display.  OMG!  Thankfully we were just passing the Kona airport, where we rented the car, so I did a u-turn and exchanged the car for a new one.  PHEW.  After resuming our trip, we saw a sign for Waialea Bay State Park and beach and decided to check it out.  We’re so glad we did! 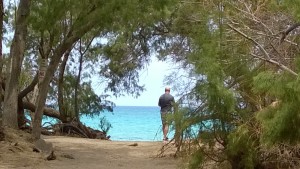 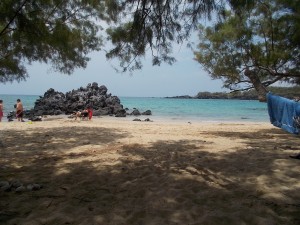 The first picture is the view you get when walking down the path to Waialea Bay.  The water is a breathtaking color, like liquid gems!  The beach was nice and shady – lots of trees.  SPF-70 people like myself and hubby love finding shady beaches, and Kona was full of them!  We set up shop under a  tree and headed into the water for a snorkel and swim.  Jim has an underwater camera and got some great shots – we saw so many cool fishes and corals!  Swimming off Kona is like being inside the Giant Ocean Tank at the New England Aquarium – it’s so blue and clear you can’t believe it’s real! 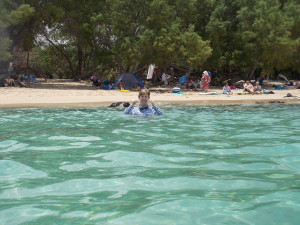 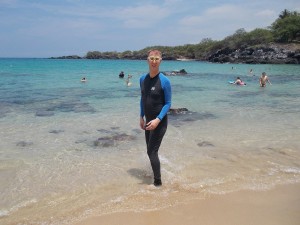 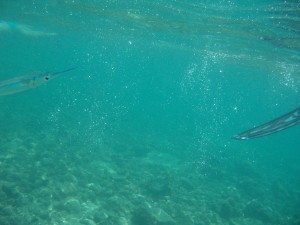 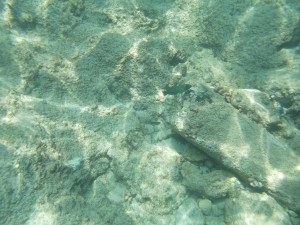 After that we continued north on Route 19 and discovered the amazing town of Waimea, which is at elevation 4,000 feet.  It looks like a Dr. Seuss landscape.  Tons of randomly giant hills all over the place, which are satellites from when the Kohala volcano was active [half a million years ago].  We had lunch at a cool little diner where I tried “fried green beans” – they were gooooooooood… After lunch we discussed heading back to Kona, or continuing our exploration of the north side of the Big Island.  We decided to continue north, and ended up driving all the way to Hilo [3 hour drive from Kona if you don’t stop – took us about 5 hours].  Just before Hilo we noticed signs for a “4 mile scenic drive” on the Hāmākua Coast.  It’s totally worth it for the views!  But it’s a very narrow, twisty, windy road, with lots of blind corners and one-lane bridges [many of which were just before or just after blind corners – helpful!].  Asides from the terrifying & imminent threat of front-end collision, we thoroughly enjoyed it! 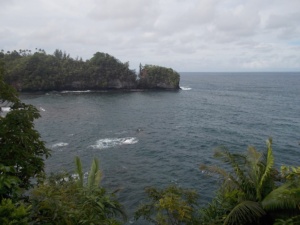 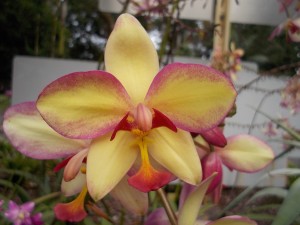 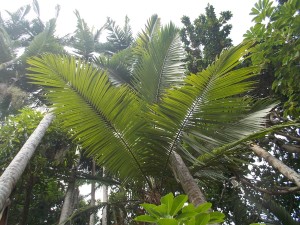 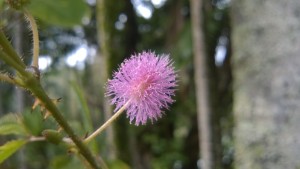 We didn’t even stop in Hilo, except for a bathroom/snack break – we were SO tired at that point, and were dreading the 3 hour drive back to Kona.  However, as we neared Kona, we had to stop and enjoy a gorgeous sunset.  In the 2nd picture the shiny, orange-y part in the middle is the ocean [!], with the horizon in the distance and a very dark band of clouds hanging directly over our heads.  Beautiful. 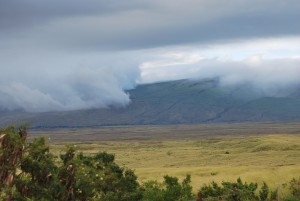 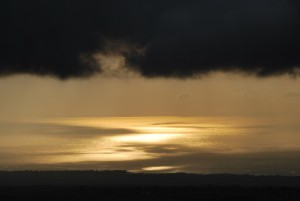 Hawaii is just so beautiful!  Everywhere you look it’s like a postcard!