In 2017 the Fire Department was called because the alarm in the first floor studio condo was going off.  It had been recently renovated and was empty.  I couldn’t reach the owner at first, but thankfully he showed up just as they were about to force the door.  As I was chatting with the firemen they said a key lock box is helpful in these situations because it gives universal access to first responders.  After they left I realized that must be what the ugly black box outside our door was: 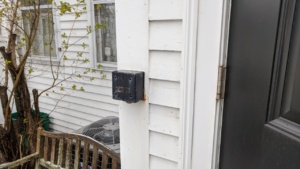 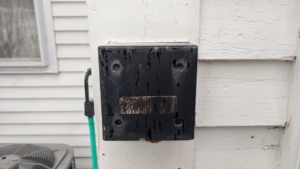 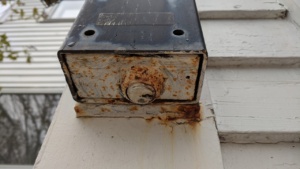 It gave me an idea.  A year prior I had matched all our loose keys to doors, labeled them, & hung them on a DIY key rack in the dining room: 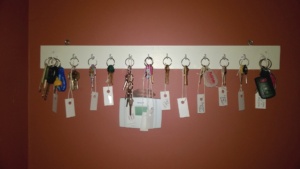 I already had keys for the other large condo due to shared pet sitting duties, but didn’t have keys to the studio.  With both owners’ permission I made copies of all the keys to each unit, as well as the basement bulkhead, and put them in a Ziplock for the fire station: 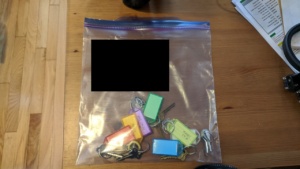 And then they sat in the dining room for two years.

Finally last fall Jim & I walked up the street to the fire station.  We couldn’t find anyone out front so we wandered up the side street and saw a guy sitting in the Fire Marshall truck.  When he noticed us he lowered his window and yelled “WHO ARE YOU!”.  We were a little taken aback, but explained why we were there.  He took the Ziplock of keys and said he’d come by the next day to put them in the lock box.

A few weeks later I didn’t hear anything, so contacted the FD again.  The Marshall told me he’d tried to put them in the lock box outside our door but the box was too small to hold the keys for the whole building [which Jim immediately questioned].  He said he’d drop off a flyer with guidelines on ordering a new, larger lock box.  A few weeks after that I contacted him again because we still hadn’t received a flyer.  He grumbled that he’d dropped it off a few weeks back and said I should check with my neighbors, maybe they had it.  I checked and they didn’t.  He grumbled again and said he’d drop off a 2nd flyer, which thankfully he did.  I went to the website on the flyer, entered our Fire Department code [also on the flyer], and ordered a Model 3262 KnoxBox lock box.

From the KnoxBox website:  “Trusted by thousands of fire and law enforcement agencies for over 40 years, Knox® Rapid Access Solutions have provided first responders with immediate access into secure buildings, campuses, residences and commercial properties when it matters most.  Removing barriers to entry reduces injuries to responders and minimizes property damage.  That’s the power of the Knox rapid access system.”  So for only $340 + $50 shipping [the thing weighs 10 pounds!] our Condo Association became the proud owners of a [very expensive] KnoxBox.  But I guess you can’t put a price on first responder access.

When the new KnoxBox arrived, Jim said “it’s no bigger than the original!  I bet the Fire Marshall never even opened the old box!!!  It was just easier for him to have us order a new one!”.  Then the new box sat in the dining room for a couple of months.  It was winter and I didn’t want to install it in the cold, and also had no idea HOW to install the damn thing.  It says you can hire a handyman to do it, but I knew I’d be able to do it myself, so I planned to wait for warmer weather.  Then I got a call from a NEW fire Marshall, who thankfully was very nice and not all gruff & grumbly like the first one.  He said he inherited the job quite suddenly [shocker] and was asking about the large Ziplock bag of keys on his desk with our address & phone number on it.  I explained we’d ordered a new lock box and would be installing it soon.

Since this Fire Marshall seemed much more action oriented, I decided to get my act together.  The instructions said to install the lock box with 3/8″ Grade 5 or Grade 8 fasteners.  I had NO IDEA what that meant.  I went up the street to the local hardware store and explained what I needed.  The nice old man said it would be easier for him to help me if he actually could see the lock box, so I went home and got it.  He had never seen or heard of such a thing, but was determined to help [he also called me “dear” and patted my shoulder, which I let slide since he was ancient and very gentlemanly].  The lock box is HEAVY.  It’s basically a miniature safe.  He found me screws which would work, but unfortunately they weren’t the kind with a screw head, they were the kind requiring a socket wrench.  And since the box is so deep, he helped me find a socket head extender so the socket wrench could still reach the screws even when they were deep inside the lock box being screwed into the house: 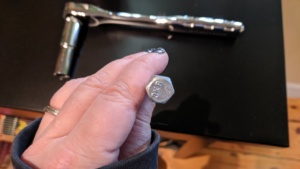 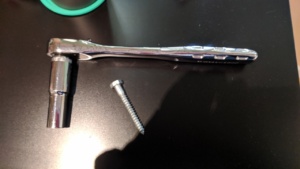 Turns out I wasn’t able to install the thing myself.  It’s too heavy to hold up AND screw to the house, so hubby helped me.  It was even too heavy for me to hold up and mark holes for pre-drilling while trying to keep it level!  So hubby held it up while I did that, then I pre-drilled, then I stood under the lock box and held it up while he used the socket wrench to screw it in.  It took us FOR EVER.  But we did it!  I have hardly any photos because it was a 2 person job the whole way through.  It was Jim’s idea to install it next to the front door of the condo house, which the Fire Marshall concurred with.  Our door is around the corner up the driveway side of the house.  At least this new box will be visible to first responders.  Here’s Jim screwing in the last couple of screws with the socket wrench: 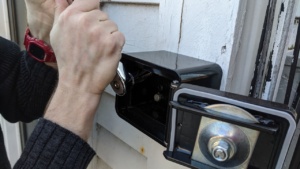 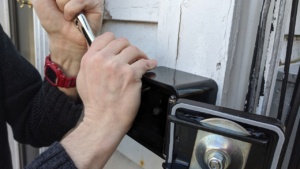 Looking into the box after 3 screws were in: 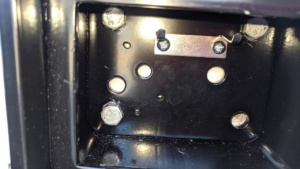 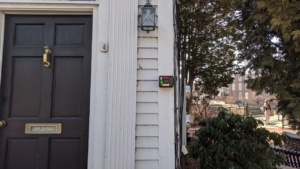 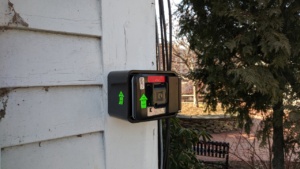 The instructions said to caulk the sides and top, so I did that: 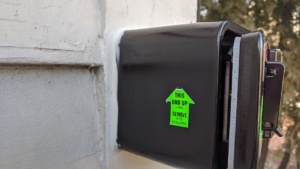 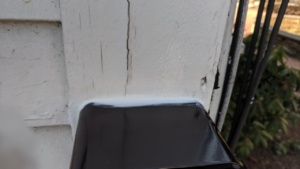 Then I called and let the new Fire Marshall know it was installed and ready for keys.  He came by a few days later and put them in.  Success!  I showed him the original box outside our door and asked if he could open it [Jim wanted to see if it actually was too small inside].  He tried and almost broke his key off.  After a few tries he said “the lock is corroded shut – I don’t think it’s been opened in years”.  I told him how the original Fire Marshall said he’d opened it, and how my husband said he probably hadn’t.  The new Fire Marshall just smiled and had no comment.  I like the new Fire Marshall.

He asked me if the house had a fire panel, so I let him into the front hall and showed him.  He asked when it had last been inspected and I said I had no idea – not since I’d moved in in 2012.  He said they’re supposed to be inspected annually.  And now that HE knew it hadn’t been inspected in over 8 years, he’d have to put it in his report if there was ever a fire at our house.  He said sometimes insurance won’t cover fire damage if the panel hasn’t been inspected recently.  YIKES.  I had no idea they even needed to be inspected, let alone annually, but it makes sense!  He showed me there’s a fault showing for the studio condo, and recommended we get it inspected sooner than later.  So that started me down a whole new rabbit hole of getting the thing inspected.

Long story short, I called the alarm company the Fire Marshall suggested, Wayne Alarm.  A sales rep came out and discussed the process with us, from a safe distance.  That was early March when things were first starting to get weird.  The rep explained that during the inspection all smoke detectors, fire horns [never knew what they were called – they’re the openings in the wall which blast the ungodly sound of the alarm], heat detectors, emergency lights, etc. would be inspected and if they passed they’d be given a bar code sticker to make future inspections much easier.  If they failed they’d be fixed/replaced.  He said one technician would stand in the front hall with the fire panel while the other tested each component.

On April 3rd the technicians came.  They weren’t wearing masks or gloves or any type of Covid-19 protective gear, which freaked us out.  We complained to the company later that day and and they apologized.  The technicians were able to test the basement, common areas [front & back stairwell], and the vacant condo which is for sale/under agreement and hasn’t been occupied since January.  Once the pandemic calms down, they will come back to test our condo and the studio condo [which is still showing a fault on the fire panel].  Meh.  It was necessary for them to come and do at least what they could, since a fire inspection is part of the condo sale process for the vacant condo.

Even though it was a long and sometimes frustrating process, I’m very glad we have a lock box and that the fire station or police/EMT will be able to quickly gain entry into our house.  Once the other large condo sale is finalized, I’ll have to have the Marshall come back and switch out the old keys for the new ones.  Hope you’re all staying safe!  So surreal.