Today after work I was running around doing chores and unpacking Amazon boxes into assorted Christmas gift piles.  While I was walking through the kitchen to the basement I noticed Darwin was perched in front of the fridge, staring intently underneath it.  That means he KNOWS there’s a toy or hair tie under there.  He LOVES hair ties.  They’re his favorite toys ever.  Especially the nasty old ones I find on the ground outside and in parking lots.  The older and gnarlier, the better.  I grabbed the yard stick and fished around underneath.  He knows that means his “friends” will soon be released from their dark prison.  However, I found nothing.

I kept doing chores and heading up and down from the basement to the kitchen and up again to the girl cave.  He kept staring intently under the fridge.  So I was like “OK.  I know by now, from experience, that there’s definitely something under there”.  So I pulled the fridge out from the wall and found ELEVEN hair ties [eleven!]: 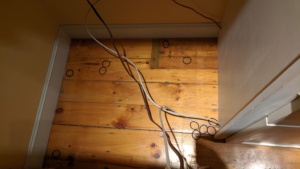 Darwin quickly slithered back there and began taking inventory: 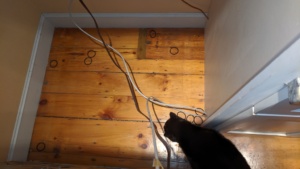 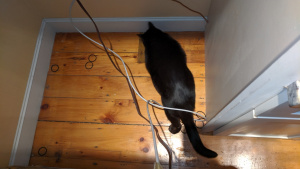 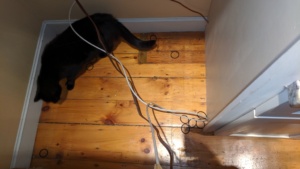 But while I was back there I noticed the black mold I eradicated back in March 2017 was starting to grow back: 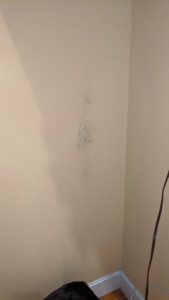 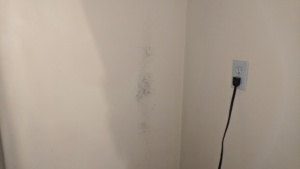 NOTHING like it was back in 2017 – that was NUTS.  The wall was black and furry back then: 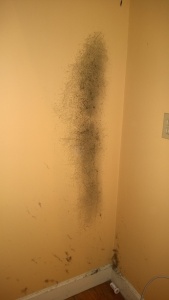 But at least now I knew what to do:  grab the white vinegar, grab the vinegar spray bottle, and go to town.  I sprayed the wall really well and then wiped it down with paper towels.  Mold eradicated 🙂 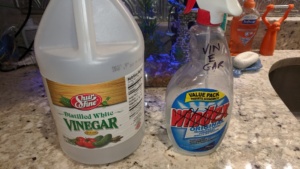 Meanwhile, in Winston news, I decided after the mold interlude to make him a cardboard box clubhouse.  Ever since Killy died this past September, Winston has been a one-floor-level rat.  The floor of his cage is plenty big for one rat, but he must get bored.  He spends most of the day in his roll-y nest, but maybe now he’ll enjoy some quality time in his box, which I lined with old t-shirts: 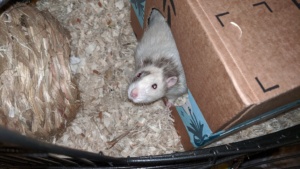 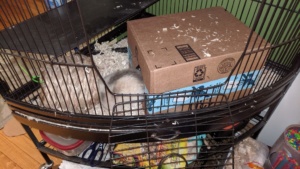 After investigating he went right back to his roll-y nest [you can see his head on the far left] but I think he’ll come to love the clubhouse: 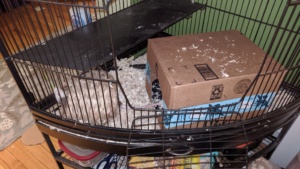