I’m FINALLY starting to get my blog & project mojo back!  Woohoo!!!  Everyone always asks “where do you get your energy?” and this past 6 months has been a great example of how long it can take for my energy to recharge.  I have done NOTHING.  And when my energy [mojo] is gone, there’s nothing I can do to make it come back.  I just have to wait.  I also wasn’t in a good place mentally for most of the spring/summer because my blog unintentionally hurt someone I love and they have since left my life, which took me a long time to accept and get through.

ALSO – and a large contributing factor to my blog blahs – WordPress updated my site to WordPress 5.0 [aka “Gutenberg”] back in February.  They called it “a whole new way to use WordPress” and “just the beginning”.  They changed EVERYTHING about how posts are written.  Many people, myself included, HATED IT.  Granted, I hate change anyway, but this was TOO MUCH CHANGE.

The Classic Editor, which I’ve used since joining WordPress in August 2013, is very similar to Microsoft Word.  Once you click the New Post button, a fresh editor screen comes up: 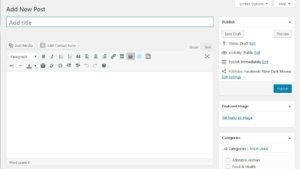 You can dive right in, writing whatever comes to mind.  Adding photos, whether it’s 1 or 100, literally takes 3 clicks of the mouse.

The NEW Gutenberg Block Editor is very bulky and confusing.  It seems more like something a professional web developer would use, versus a hobby blogger.  I’ve taught myself enough HTML and CSS over the years to do pretty much whatever I want with my website, but Blocks are beyond me [mostly because I think they’re stupid].

Clicking the New Post button with Gutenberg brings up this: 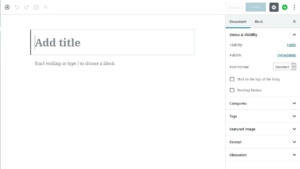 No friendly word processing type icons at the top to help with writing, just “Add title” sitting ominously in a box.  When you start typing a sentence you think “OK, this isn’t so bad”: 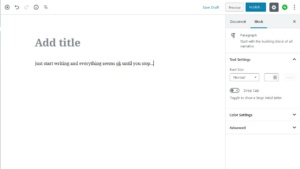 But as soon as you take your cursor away you realize your sentence is trapped in a box [aka an EVIL BLOCK]: 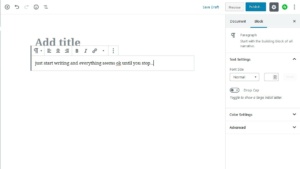 When you try to add photos with Gutenberg:  TOTAL NIGHTMARE!!!  You have to first manually add an Image Block, drag it into the editor, select the ONE photo you want [you can’t select multiple photos for an Image Block, oh no, that would be way too easy], and hit OK.  And once it’s in place, it’s HUGE – each image takes up as much space as it possibly can: 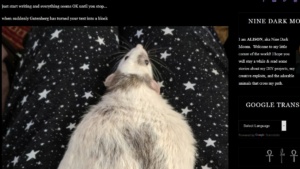 With the Classic Editor, images are normal sized [you can always make my images larger by clicking on them and using the image carousel].  I love having reasonably sized images – usually a pair of them, with text above and below.  That way they don’t take over the story: 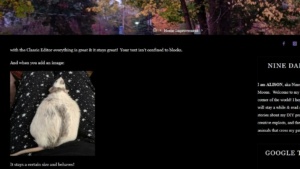 My typical style of blogging is to upload all my photos for each post at once, then add text above and below them as I write my story.  I often have up to 30 images.  To upload them in a batch with the Classic Editor takes mere seconds.  Then I can cut/paste them to change their order, add text above and below them, etc.  It’s very much like having a physical story board.

With the new Block Editor I’d have to first add 30 Image Blocks to my post, then fill them, • ONE • AT • A • TIME • , with each of my 30 images.  That would take at LEAST a half hour.  Ridiculous!  They suggest adding an “Image Gallery” instead, which allows you to drop a grid of photos into a blog post.  But the gallery is a solid entity – you can’t put text in between the photos.  In order to add text you have to use the photo “caption” feature.  But a little caption under each photo is NOT the same as using your photos to weave a story!

For me the new Block Editor COMPLETELY ruined the artistic flow of my writing.  Writing posts became such a chore that I basically gave up blogging.  I tried using the Block Editor a few times over the summer but got frustrated to the point of tears.

Last month I decided to search for a way around the blocks, and discovered that SO MANY PEOPLE hate the new Block Editor that WordPress released a Classic Editor plugin [aka “app”] which has over 5 million installs [apparently they stop counting at 5 million], AND a 5 star rating: 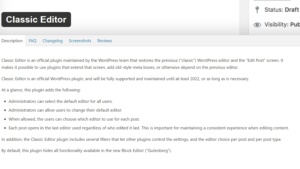 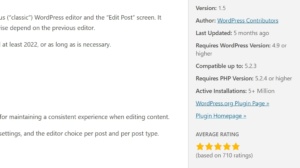 I literally jumped for joy.  Obviously I’m not the only one who hates the new Block Editor!  CAT PARTY c/o Giphy.com:

I usually hate moving images, but that one is a fair representation of how I felt 🙂  I especially love the cat in the back.  Heh. 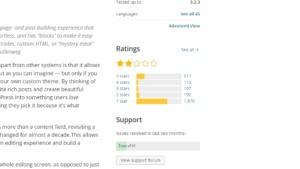 So I am hopeful I will NEVER HAVE TO USE BLOCKS AGAIN.  Even looking at the Block Editor briefly for this post gave me stress & anxiety.

Since downloading the Classic Editor plugin I have gone back and re-written the 3 posts that I’d originally written with the Block Editor and converted them back to Classic.  Now I feel balance has been restored in my universe.  Or at least my blog 🙂