Hubby & I have finally joined the Dark Side and gotten a King sized bed.  I was happy with our Queen, but after 3 years of trying, he finally talked me into a King.

He’d bought the Queen frame at IKEA in 2009 right after moving into the condo [photo credit Pop]: 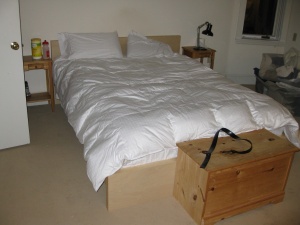 I loved the simple lines and how low it was to the ground.  The only pic I have showing the height is from 2016: 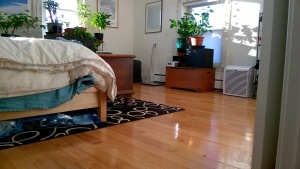 I only mention the low height of our OLD frame because the cats are going apeshit over how high off the ground our new bed frame is.  They can literally run under the bed without ducking.  They LOVE it.  They did manage to squish themselves under the old bed frame during thunderstorms and fire alarms, but it wasn’t easy [although highly comical to witness].

The new King frame is by Atlantic.  We got it on Amazon.  It’s their grey mission-style frame with under-bed storage drawers.  They have many style and color options.  I picked the style, Jim picked the color: 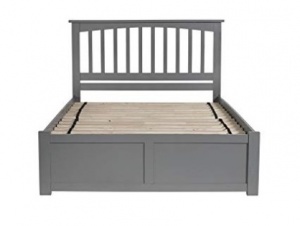 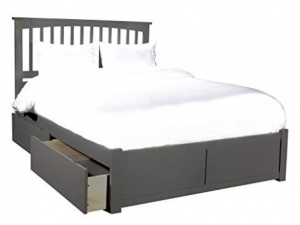 It arrived by moving van in 5 large and very heavy boxes which I had the movers bring up to the bedroom: 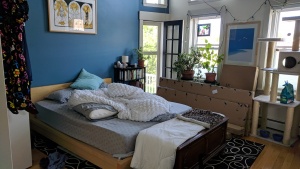 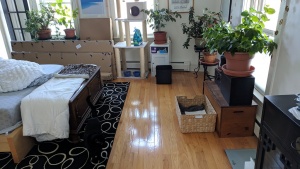 We set it up the following weekend.  We had also ordered a memory foam mattress from Amazon which arrived separately.  We kept it in it’s tightly rolled cylindrical wrapper until we had the bed frame put together.  The new bed looks beautiful: 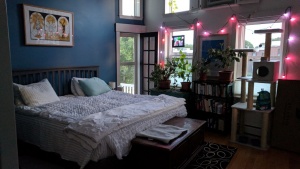 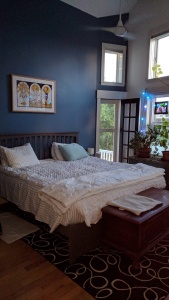 Thankfully our neighbors were happy to take our old bed frame and mattress.  They also took all the old bedding off our hands, which was super cool.  Unfortunately for them, they were not quick enough to take advantage of the 3″ memory foam Queen topper.  It was in the pile downstairs with the old frame, mattress, and bedding.  BUT, the first night I slept on the new mattress I quickly realized it was waaaaaaaaaaay too hard.  I almost burst into tears halfway through the night because my whole body hurt.  Maybe I’m just a wuss.  So I went downstairs at 2am and dragged the memory foam topper back upstairs and, without waking hubby, managed to sneak it onto my side of the bed.  I lay a sheet over the top and slept like that the rest of the night: 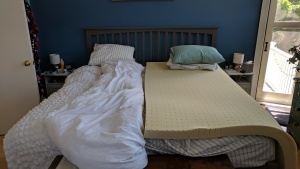 The following morning I grabbed a utility knife and sliced it in half: 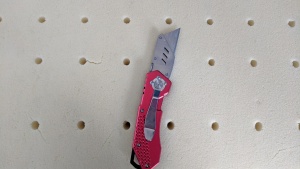 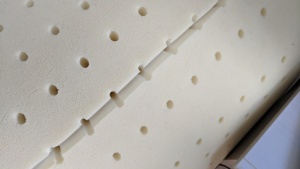 I slept on it like that for a week…: 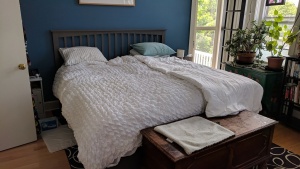 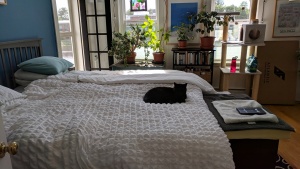 …until the new King topper arrived from Amazon.  Hubby asked me later why I didn’t just put the whole topper on the bed instead of cutting it in half.  I had a “duh” moment.  I didn’t know!  I assumed since it was a Queen and the bed was a King that the topper would fit weird and cause us to roll off it during the night.  But I guess it would have worked until the new King one arrived… oh well!  And then we could have given the Queen one to our neighbors… hindsight!  Ugh.

But I made cat beds out of the rest of the topper.  First a small one to fit in Birdie’s favorite sleeping basket: 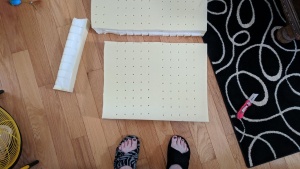 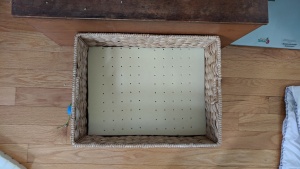 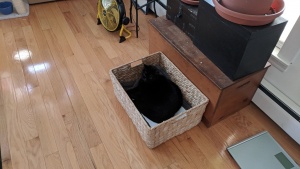 Then a small piece to fit in hubby’s recliner for some added comfort: 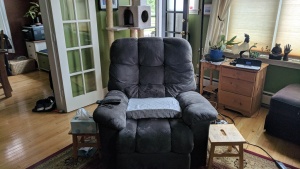 And finally a larger piece to go under the bed, which Birdie has declared HERS and she has been on it every day since: 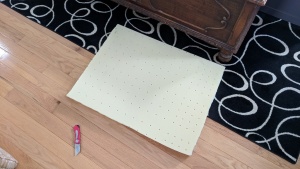 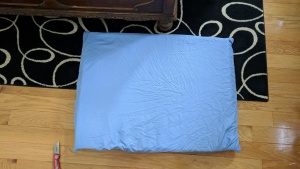 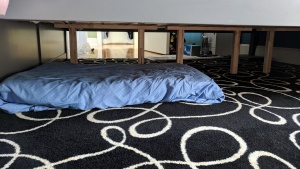 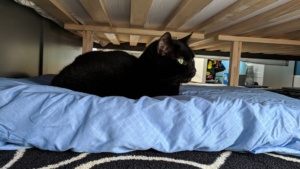 The bed came with 2 under-bed storage drawers which we didn’t put together right away.  Hubby ended up putting them together while I was at a family party.  Thank you hubby!  The drawers can either go both on one side, or one on each side.  We opted for one on each side – here’s the one on hubby’s side [left] and the one on my side [right]: 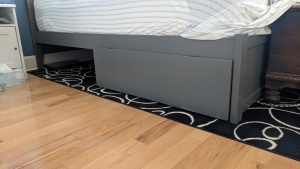 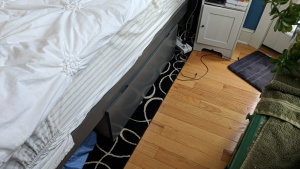 The one on my side is positioned in the middle to leave room for Birdie’s memory foam bed which is in the lower left.  The drawers aren’t on rails, they have wheels on the bottom and slide in and out as you need: 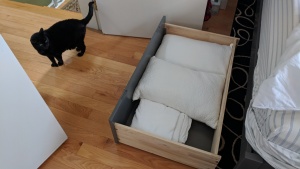 We love our new bed!