I had to wait 24 hours after patching the bedroom wall ceiling crack with joint compound before I could sand it.  So I waited until 12:30pm yesterday and got started.  I’m not sure if you have to wait exactly 24 hours, but I did.

I used 220 grit sandpaper and it went really fast! 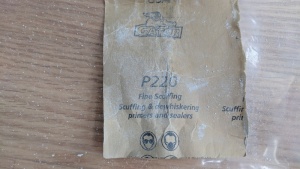 I wore my respirator and the dust rained down around me as I gently sanded the crack.  I was covered in dust, as was the wall and floor.

Cleaning up drywall / joint compound dust is THE WORST.  It’s like confectioners sugar and sticks to everything.  I spent about half an hour vacuuming it up as well as using a wet sponge and about 100 trips to the bathroom sink to get as much out of the bedroom as I could.  Including off the tops of the doors and picture frames.  Darwin, of course, lay right down in a big pile of it, so I had to grab him and dust him off as well.  Jim was like “um, why is our cat white?” 😛  I also used a [synthetic] feather duster and gave the entire wall a once-over.

Then I started taping the wall so I could edge it.  When I painted the lower half on Saturday I didn’t do the edging.  I think you’re supposed to do that part first?  But I didn’t.  I taped the walls, window frame, door frame, built-in cupboard, and ceiling.  And when I had LESS THAN THREE FEET TO GO, I ran out of Frog tape: 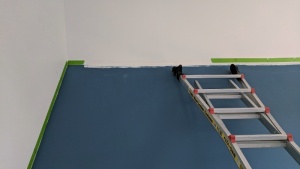 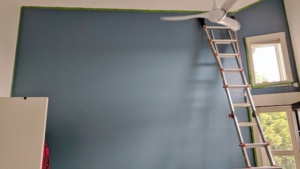 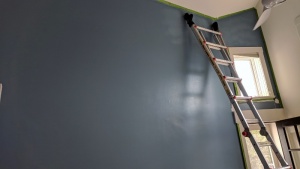 I chose Satin finish because I like a bit of sheen in my paint.  The guy at the Benjamin Moore counter in our local hardware store kept telling me “most people choose Eggshell for bedrooms”.  I kept saying “SHINY!  I WANT SHINY!”  And he finally relented after asking two more times AND showing me the demo chart with examples of each finish.  I kept pointing at the shiny ones and saying “SHINY!”  Little twerp.  I wanted to deck him, but I guess he was just doing his job.

I love the sheen – it’s just the right amount: 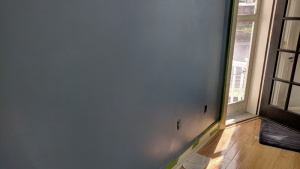 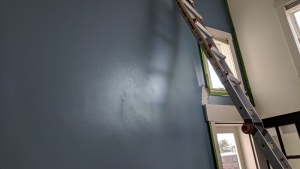 I was so exhausted all day yesterday, physically.  After 4 days of up and down the ladder and working on the wall I had reached the end of my stamina.  But I kept pushing myself because I wanted to get it DONE.  At least the blue part.  I only took a few photos, apparently.  I could have sworn I had more, but I don’t.  Too tired to take photos = VERY tired!

Around 5:30 last night I finished the blue paint.  I tossed my roller and my paint pan in a large garbage bag.  I was too tired to clean them.  I’ve had the paint pan for YEARS so I’m due for a new one.  I balled up the still dusty drop cloths and put them downstairs to go out with the trash, and I picked up what I could off the bedroom floor.  The second I put the first drop cloth on the kitchen floor Darwin was all up inside it [looking guilty for some reason!]: 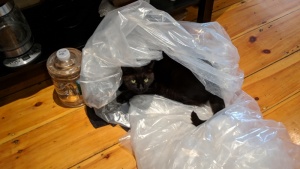 I headed back up to finalize everything for the night and noticed I’d left about 3 feet of frog tape up at the ceiling line.  I grabbed my ladder and – not wanting to touch the freshly painted wall with it – I walked it backwards holding it straight up and down [this is my Little Giant 40 pound articulating ladder, positioned in the extension ladder position] and managed to walk it straight into the ceiling fan [which I installed in 2014].  OMFG!!!  The fan was on high speed, of course!  So it made a horrendous metallic clacking, ratcheting sound as the blades slammed into the ladder, followed by a thunk and a clack as something small [probably the screw holding the base to the ceiling] fell on the floor.  It scared the bejeezus out of me!  I let the ladder fall against the wall and ran to turn the fan off.  It was swinging wildly back and forth because it was no longer being held tight to the ceiling by the base.  Hopefully it’s a simple fix and I didn’t do any lasting damage.  I’ll know more when I can get up and take a look.  I was WAY too tired last night to even think about it: 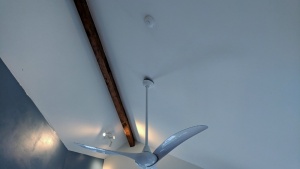 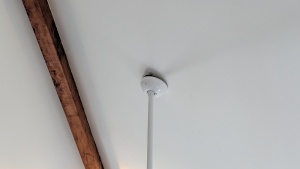 In fun news, we had some new visitors to the squirrel platform Saturday night!  At dusk hubby noticed something large on the platform and said “I think there’s a cat out there!” and when he took a closer look he yelled “it’s a raccoon!”  I ran over and was so happy to see the fat little dude 🙂  There were actually 2 of them, and they were calling to each other as they rummaged around the yard below the platform and climbed the tree to get onto it.  Such cute little chirps!  I tried to get some shots through the window but they understandably didn’t come out very well.  You can see both raccoons in the first picture, one on the platform, one on the right reaching up from the ground: 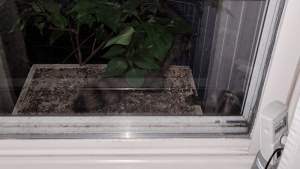 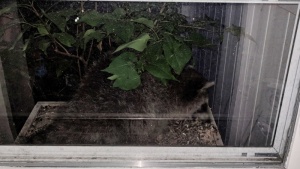 Look at that face! 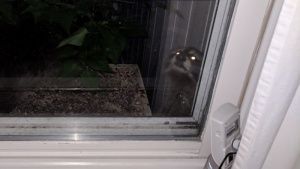 Then I ran up to the deck since I’d be able to look directly down at the platform.  I went to lean over the railing and came face to face with this: 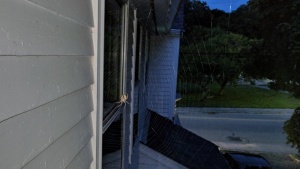 Massive spider and web.  I screamed a little, but not too loud… Then moved over slightly more to the right and took some shots: 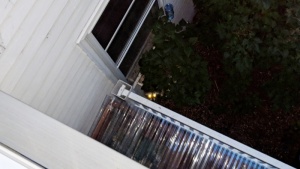 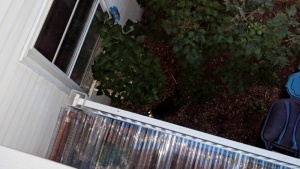 Can you see their glowing eyes?  They were on to me from the second I took the first picture.  Probably because of the flash.  Or maybe because of my spider-induced yelp.  Sooooo cute!!!

After work today I investigated the ceiling fan issue.  Thankfully all the wiring is intact.  And thankfully I have photos from when I installed it in 2014, because I was able to see that a crucial screw is missing: 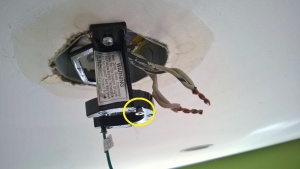 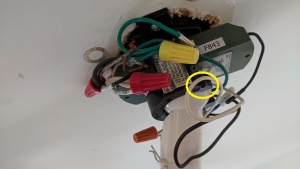 I searched the upstairs, I searched the trash, and I tried to find a match in my own screw collection but no dice.  The fan manual says it’s a #8x¾” machine screw.  Hopefully my local hardware store sells those.  I’ll check tomorrow after work.

PS you should have seen the look on Birdie’s face as I shimmied on my stomach all the way under the bed looking for the screw.  Absolutely HORRIFIED.  She was [of course] on her memory foam cat bed under the bed.  She just gave me a look like “This is wrong.  This is SO WRONG”.