Since I’ve been sick for 12 weeks [TWELVE.WEEKS], I haven’t really had anything to blog about, so I’ve been writing you a story instead.  This is my 2nd foray into short story writing.  This story was inspired by something hubby and I witnessed from our backyard on October 8th.  So I guess you can say this story is “Based on Actual Events” 🙂

Once upon a time, a great log floated down the Ipswich River and settled halfway across the falls.  The turtles, beavers, otters, snakes, ducks, & cormorants watched it with wonder.  The cormorants were the first to realize the potential of the log.  They sat at the top to dry their wings and sun themselves between fishing shifts: 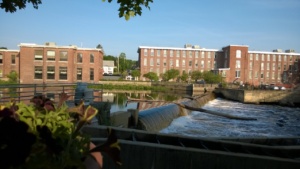 Sometimes they’d waddle-walk up the log, holding their wings out for balance.  And sometimes they’d fall in, then scramble around and yell “Meant to do that!”

The Great Blue Heron also tested the potential of the log but found it pointless.  “Can’t spear fish,” he grumbled “too high”: 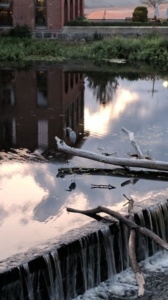 The snapping turtles ignored the log altogether.  “A pestilence!”…  “An interloper!”…  “An eyesore!”  They all agreed.

The beavers stared at the log and thought “It’s a start”.

The painted turtles, however, knew it had potential. “A jungle gym!”  “A place to sun ourselves!”  “A waterfront deck!”  But alas, it was too high to reach.  Or… was it?  They soon discovered the full moon brought the tide in high enough for them to reach the log.  So a few times a month they’d gather on the log and sun themselves.  But they’d never stay for long:  EVERYONE remembered what happened to poor Edward: 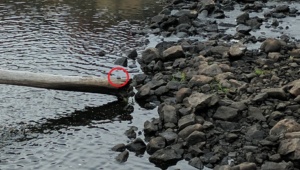 Edward climbed onto the log, promptly fell asleep, and was stranded all night until the next high tide.  How embarrassing.

But Edward’s plight had given Clarence & Clementine an idea.  Who’s to say being stranded on the log had to be a bad thing?  Maybe it could actually be a good thing!  It would give them plenty of time to explore, and perhaps even walk [“OMG, can you imagine!?!”] UP the log.  The other turtles would be so impressed!  And Clarence & Clementine would be able to swim in the fresh water above the falls instead of the tidal water below – a win win!  The more they thought about it, the more determined they became.  They knew their plan was dangerous, and could fail, so they kept it to themselves.

As the Harvest Moon approached, they swam in excited circles, waiting for the super high tide to carry them up and onto the log.  Cousin Vicky swam by, looked at them suspiciously and said “what are you two up to?”  Clarence and Clementine had a quick meeting & decided to tell her – she was family after all.  Cousin Vicky shrieked upon hearing their plan, and Clarence quickly slapped a wet hand over her mouth. “You don’t have to come with us, but for heaven’s sake, BE QUIET!”  Vicky calmed herself down by doing the deep breathing exercises her therapist had taught her, and agreed to at least climb onto the log with them [her tan could always use some work]: 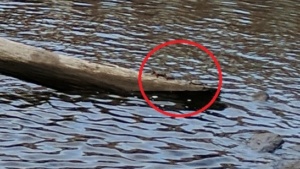 Clementine wanted to go first, but the always chivalrous Clarence insisted it be him.  After an hour of distracted tanning, Vicky finally shrieked “When exactly is your big PLAN going to start?  We’re going to get stranded and look like fools!  FOOLS!”  So Clarence took a deep breath, kissed Clementine, ignored Vicky, gulped down his fears, and very slowly started edging up the the log: 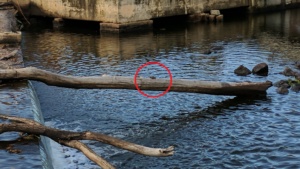 Clementine was so nervous for him!  “Be careful Clarence!  Don’t look down!”  Vicky was mostly annoyed that she’d skipped a manicure for this nonsense.  “He’s going to fall” she kept grumbling… “total fool”.  But Clarence kept going, a few inches at a time, until he made it up and over the falls!: 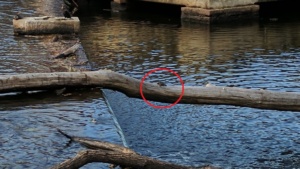 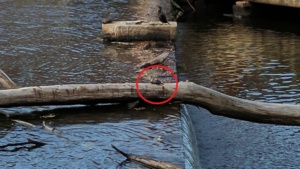 He was amazed!  “It’s so much brighter up here!  The wind!  The sun!  The smells!  Everything is better up here, just like we thought!”.  He couldn’t wait for Clementine to join him.  He slowly edged his way further along the log – he didn’t want to jump off too soon and be washed back over the falls – talk about embarrassing: 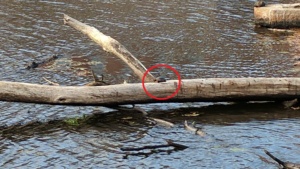 As Clarence edged forward, he hoped that Clementine had started her ascent [she had!].  Once he reached a good jumping off spot, he… decided to keep going.  Cousin Vicky would have muttered “fool” again, but Clementine would have smiled – she knew her Clarence had quite the adventurous streak: 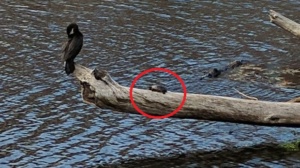 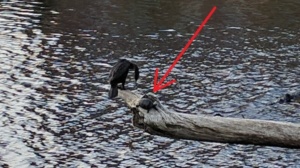 What he hadn’t foreseen, though, was the large black hell beast perched at the very end of the log!  The cormorant didn’t notice Clarence at first, but when he did, all hell broke loose.  Beak pecking, neck lunging, loud hissing, scary wing flapping.  “Get thee gone, foolish turtle!  This is Cormorant territory!”

Meanwhile, Clementine was making steady progress up the log.  She had no fear of heights and was making double time: 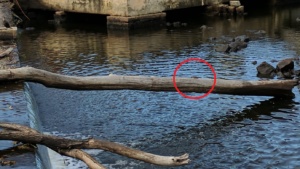 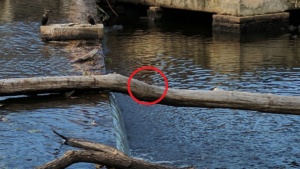 Once she was safely above the waterfall she was so relieved to see Clarence!  Although she wasn’t at all sure what he was doing talking to a Cormorant.  Everyone knows how cranky they are.

Once Clarence got himself turned around he was overjoyed to see Clementine.  But his attempt at a happy wiggle landed him in the water instead.  D’oh!: 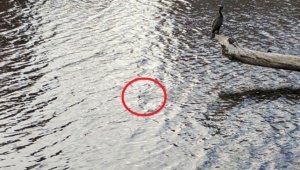 Clarence yelled back “Jump, Clementine!  Jump!  Evil Hell Beast!  EVIIIIIL HEEEEELLLLLLLL BEEEEEAAAASSSSSTTTTT!!!”.  Clementine rolled her eyes [she knew cormorants were more bark than bite] and continued her trek along the log.  When she was a safe distance from both the waterfall and the cormorant, she gracefully dropped into the water and swam to join Clarence in the tall grass at the edge of the River: 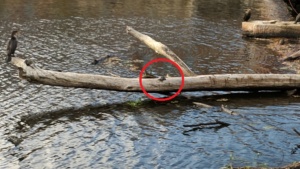 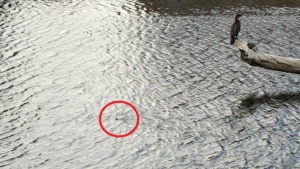 Meanwhile Vicky huffed and grumbled at the base of the log.  She’d been so busy watching Clarence and Clementine’s foolishness that she’d missed her chance to de-log.  She just knew the other turtles would start calling her “Edwina”.

But the next morning, when she was finally able to get off the log, and before any of her friends could start teasing her, she told them the amazing story of “Clarence & Clementine’s Brave Adventure”.  News spread fast among the painted turtle colony of the Lower Ipswich Falls and Vicky became an instant celebrity – she had been there to witness the greatness after all!  As she basked in her newfound [and much deserved, of course] fame, more and more turtles took the brave journey up the log to the Upper Falls and joined Clarence and Clementine in the fresh water.  Freshwater is much better for painted turtle shells than brackish tidal water *nods*.  That is fact. 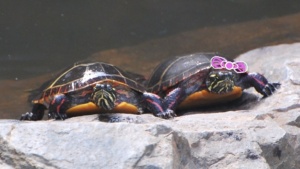