We traveled to Florida the day after Thanksgiving and spent a week in the summer sunshine.  We came home to a very cold house [low to mid 50’s] and a very swollen river: 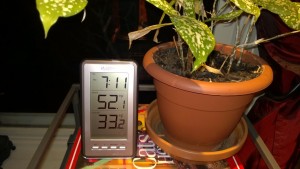 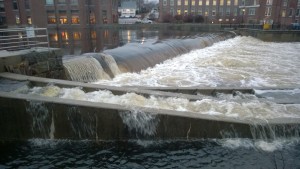 Yay.  Our house has 3 heating zones:  the living room, the master bedroom, and the dining room/girl cave [which makes no sense since they’re on different floors – the girl cave is directly above the dining room].

The thermostat for the dining room/girl cave zone has never worked – well, the thermostat works, but the heat has never turned on.  Brrrrr!  We had a hack plumber/electrician check it out last year [I think he was a meth fiend – he couldn’t stop twitching and scratching – we hired him by accident due to a mis-communication…], and [surprise!] he couldn’t figure out what the problem was.  I’ve always had to rely on a space heater in the girl cave when I want to spend any time in there during the winter months.

The other two zones have always worked fine.  However, when we got home from Florida, the only zone working was the master bedroom – the living room was freezing cold, and the thermostat wasn’t doing anything.  Crap!  Jim left messages with 3 different plumbers, but they were swamped due to massive flooding occurring in the area from all the rain.  One finally called back, but the earliest he could come was Tuesday afternoon, 5 days after we got home!  So for 5 days we huddled in the living room under blankets and comforters.

Finally the plumber arrived and he figured out the problem in 5 minutes:  there was air in our pipes!  We have baseboard heat, which is powered by water heated by gas.  I followed him to the basement and showed him the bank of pipes supplying hot water to the 3 condos in the building: 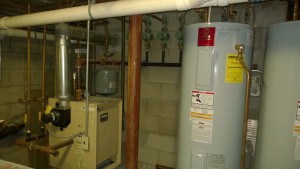 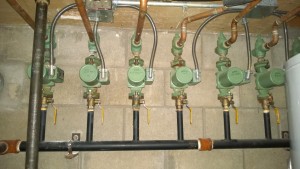 He traced our pipes from the green things over to where they connect to the gas heater: 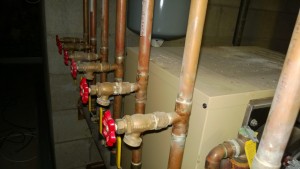 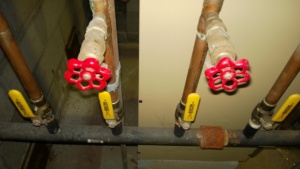 Thankfully everything was labeled!  Although I had to translate for him, since ours are labeled with things like “back left” and “1st/2nd floor left”.

Once he identified which pipes fed our baseboard heaters, he grabbed a bucket and turned on the red faucet handles, one by one, flushing first air, then water/air out of the pipes.  He was also flicking the switch on this do-hickey, I’m not sure what it is, but it’s located above the gas heater, and is separate from our water heaters: 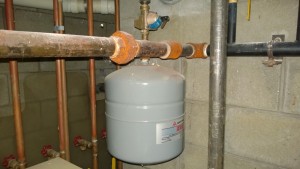 After flushing the pipes for a few minutes until only water came out, he went back and felt the pipes feeding into the green things and said “yep – they’re getting hot!”.  We went back upstairs and he had me turn on the living room thermostat and the dining room thermostat.  We could hear the heat kicking in!  And 5 minutes later the baseboards started getting warm – hooray!!!  Apparently you’re supposed to flush the system once a year or so… we’re guessing ours haven’t been done in years.  I had no idea… so even though I didn’t DIY this fix, next year I’ll be on top of it nods!

Then we went around to all the rooms and he had me open the vents on the baseboards to their fully open position: 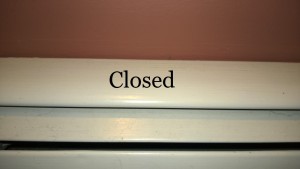 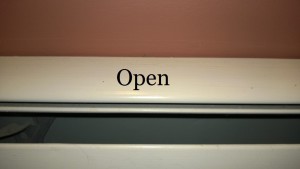 I didn’t even know you could do that!  Turns out most of ours were at half mast.

So, our heat wasn’t actually broken, it was just full of air.  Amazing!

I learned recently from a new plumber we hired to replace our water heater that you can crack your boiler by flushing the system yourself… OIKS!!!  Apparently there’s more to it than just opening the red faucet handles and fiddling with the do-hickey on the little gray thing.

We finally found a plumber who fixed ALL of our heat!  Amazing.  Joshua Eisen.  Miracle worker.

Join 21 other subscribers
← Home for the Holidays ← Winter Creativity!