Yesterday I couldn’t sit still.  I kept trying to relax on the couch and enjoy the Olympics with my husband [which I managed to do somewhat] but there was a lot of sporadic DIY activity mixed in.

So while my husband was at the gym, I decided to rip the ugly coat rack off the wall in the upstairs hallway.  I never understood why the previous owner of the condo put it there – it’s not in a room, it’s not near a door, it’s not near anything relevant.  I’ve been using it to store my extra jackets and hats, mostly due to it’s proximity to the girl cave, but I’ve always wanted to trash it.  Phallic-shaped pegs?  Really?  *Woof*!  It’s like hanging your coats on a row of frozen hot dogs.  Here’s a couple of before shots – the first one taken by my father-in-law when Jim first bought the condo, and a couple I took yesterday before ripping it down: 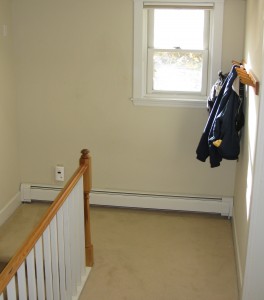 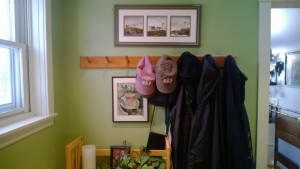 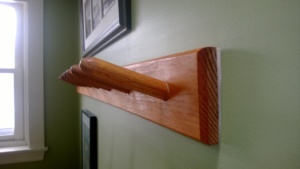 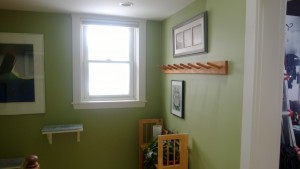 It was starting to lean a little forwards, which you can see in the 3rd photo, but it wouldn’t budge when I tried to rock it.  So much for simply pulling it down.  I was able to jam the tip of a flat head screwdriver behind it to get some leverage, then use the claw end of my hammer to finish the job.  Want to know how they attached it to the wall?  Of course you do!  Six HUGE nails!  Who does that?  I guess someone that wants the coat rack to stay there forever!  Well guess what?  I win!  Because now it’s gone!

Three of the nails came off with the board, and three remained in the wall.  Helpful.  The ones left in the wall came out with a bit of a struggle – I took a pic of them so you could see how long they were.  There was a good amount of drywall dust on the wall where the rack had been [which you can see in the 3rd photo], but my trusty Dust Buster made quick work of that. 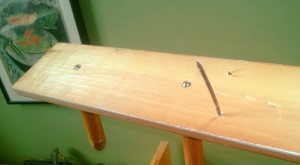 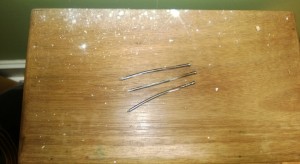 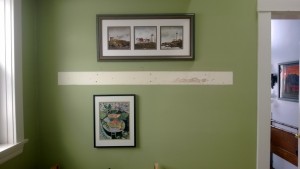 Then it was a matter of spackling the nail holes and repainting the wall where the rack had been.  Now, unless you’re up close, you can’t even tell it was there!  And it’s absence gives me a clean slate for designing the new cat platform.  On a side note, look who has discovered the new access steps [which I built in preparation for the new cat platform]!  Woohoo!  Go Darwin!  I’m hoping once Bonkers sees Darwin up there, he’ll get up there too. 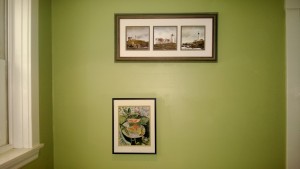 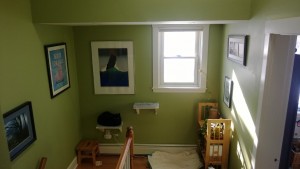