Last week I discussed life aboard the cruise ship and our first stop in Cartagena, Colombia.  The next morning we woke up docked in Colon, Panama.  We had 10 hours of shore leave, and Jim and I had chosen a ship-recommended excursion that took us on a lazy boat ride through a tributary of Gatun Lake to see monkeys and other wildlife.  Jim loves monkeys, so that sealed the deal for us!  A bus met us at the dock and took us [and the other people who bought the same excursion] to a little tour company on the edge of the lake.  All photos in this post taken by me except a few of Jim’s which I’ve noted.  We saw: 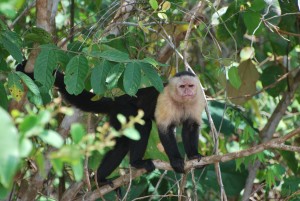 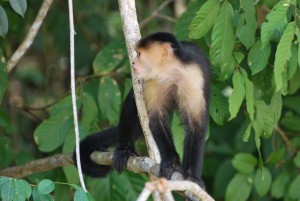 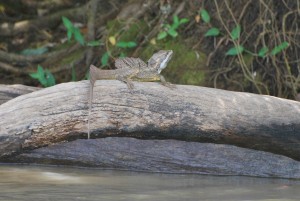 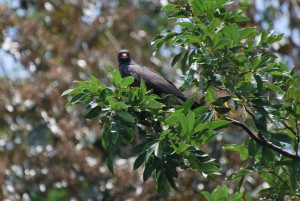 A Green Iguana [Jim got a great close-up]: 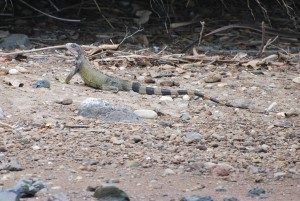 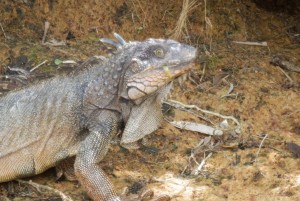 And the beyond-adorable Geoffroy’s Tamarin!  The Tamarins heard the boat and came running for banana pieces, which the crew placed on branches along the shore: 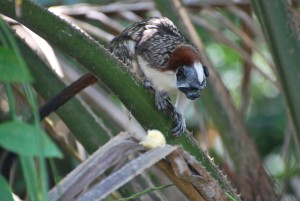 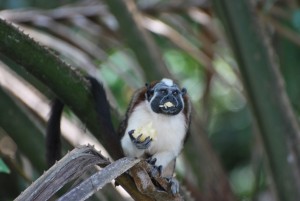 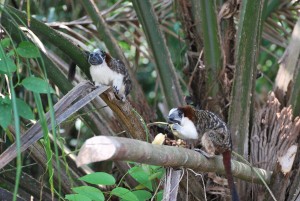 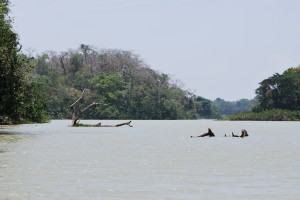 The last picture is just a shot of the river as we enjoyed the boat ride.  After the boat ride, and after the bus returned us to the cruise ship, it was still relatively early in the day, but Jim and I decided to remain on the nearly deserted ship and chillax on deck until everyone else got back.

The next day was THE day:  the trip through the Panama Canal.  Some brief history first:  the Canal was built in the early 1900’s, is 48 miles long, and cuts about 8,000 miles off a NY to CA voyage.  An original attempt by France in the late 1800’s was a FAIL.  The US took over in 1904 and completed construction in 1914.  The US controlled the canal until 1999 when it was peacefully turned over to Panama.  When ships enter the Gatun Locks at Colon, Panama, they are lifted 85′ feet via 3 lock chambers before entering Gatun Lake.  They then traverse 15 miles across the lake and enter the Rio Chagres river.  At the end of the river they reach the Pedro Miguel and Miraflores locks and are lowered back to sea level via 3 lock chambers.  They exit the canal at Panama City.  Due to tidal changes, the difference in sea level on either side of the canal [aka on the Atlantic side and the Pacific side] can be upwards of 20′!  So even if the canal was cut at sea level, there would still need to be a tidal lock at one end.  The technology wasn’t available in the early 1900’s to excavate the canal down to sea level, so the lock system was designed instead.

At about 6:30am, Jim and I woke up, opened the curtains on the big round window above our bed, and were greeted with a slimy looking cement wall about 2 feet away from us!  That was definitely a “what the hell!” moment.  The ship had already entered the first lock of the canal 🙂  The wall of the lock was so high we couldn’t see the top from inside our room.  We had some breakfast in the 10th floor buffet, then headed outside to watch the proceedings.  All available decks were covered in passengers, as you can imagine!   The “yellow” boat and “green” boat are ahead of us in the canal, heading towards Gatun Lake.  The 2nd pic gives you some perspective of the size of each lock [that’s the gate the “yellow” ship just went through]: 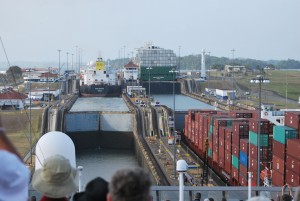 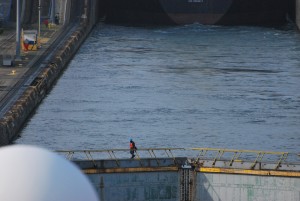 Jim got some great shots of the people gathered on deck to witness the crossing: 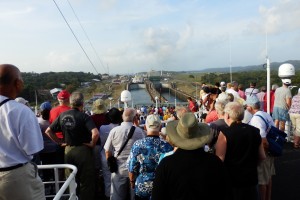 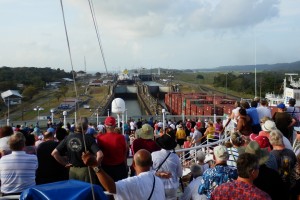 It was cool to watch the progress of the “yellow” and “green” ships as they moved ahead of us through the locks and entered Gatun Lake.  In the next pics, the green ship is just about to enter the lake, while the yellow ship is in the last lock, waiting to be lifted to lake level: 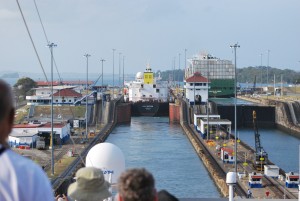 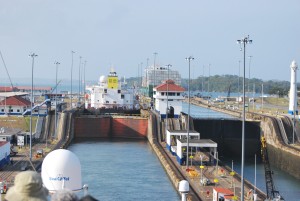 The “green” ship was off and away very fast: 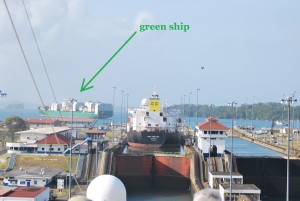 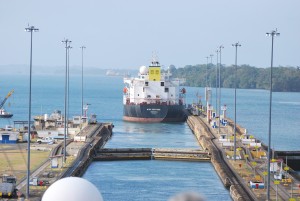 We were so close to Gatun Lake at this point!  Just one more lock to go: 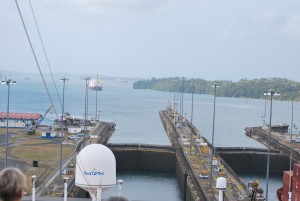 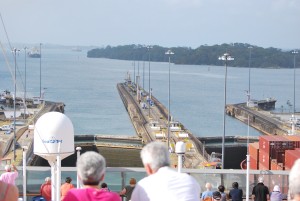 As soon as we pulled out of the last lock & into Gatun Lake, Jim and I scampered to the rear of the ship to watch the action behind us – you can see how much lower the ships are in each Lock chamber! 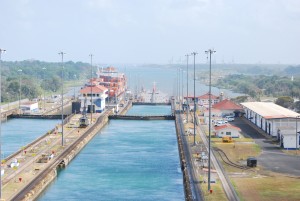 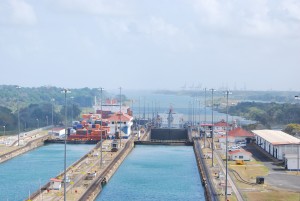 Here’s some shots of the little mechanized gizmos that help ships through the Locks: 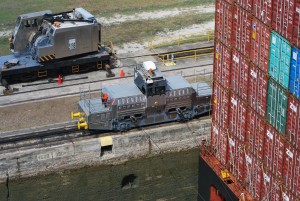 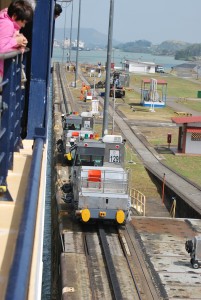 They don’t push or pull the ships, they just stabilize them so they don’t hit the walls.  There’s about 2 feet of space between the ship and the side walls.  It’s crazy!

After exiting the Canal we spent a full day at sea before reaching Costa Rica.  This wraps up Part 2!  Look for Part 3 next week, which will cover our stops in Puntarenas, Costa Rica & Puerto Quetzal, Guatamalla.