From April 1, 2013, through April 16, 2013, Jim and I joined the Ferguson clan [aka my husband’s wonderful family] on a 2 week cruise through the Panama Canal.  My father-in-law surprised everyone with the 16-day trip aboard the Celebrity Infinity: 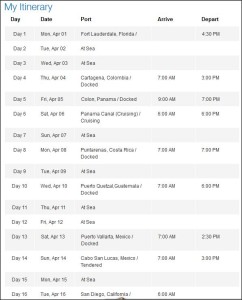 Thanks again, Pop!  In attendance were Jim’s Dad and his wife Susie, Jim’s brother John, his wife Tomoko, their 3 kids, and Jim & I.  Other relatives were invited [including Jim’s Auntie Alice and my parents] but unfortunately couldn’t make it.  The only downside to such a long cruise is having to leave work and pets behind for so long.  Otherwise it was a very welcome vacation and the “trip of a lifetime”!

The 9 of us met up in Fort Lauderdale, FL on March 31 and stayed overnight at a local hotel.  Then spent most of April 1 going through customs and standing in various lines to board the ship.  And then, once on board, trying to get our bearings – it’s H·U·G·E!  The Infinity was launched in 2001, is 965 feet long, and can hold 2,170 people.  It has 12 floors of accessible space, with many staircases and elevators to help get you around.  Our rooms were on the 2nd floor and each had a large porthole over the bed.  I enjoyed looking out of it whenever I woke up in the middle of the night: 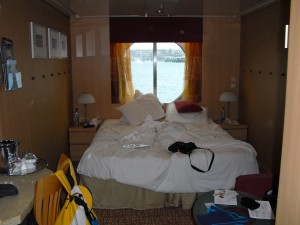 It was my 1st time on a cruise ship, and Jim’s 2nd.  It’s a different type of experience when you’re not used to spending days out at sea!  Jim’s Dad was in the Merchant Marines and I think he feels more comfortable at sea than he does on land.  I loved the port days, but the “at sea” days took some getting used to.  It was always fun, after spending a day or 2 at sea, to wake up in the morning, look out the window, smack Jim, and say “LOOK!  LAND!  WOOHOO!”

During the cruise, my father-in-law’s only rule was do whatever you want all day, as long as you’re in the formal dining room at 6:00pm for family dinner.  Dinner was typically a 2 hour affair with lots of wine, stories, and laughter.  The ship assigns tables to each group, so we always had the same table and the same waiters.  Ours was a large, circular table with an ocean view.  There are 2 dinner sittings each night – one at 6pm and one at 8:30.  I was thankful that Pop chose the earlier option [8:30 is way too close to bedtime!].  Here are some candids taken by random members of the Ferguson clan, while dining:

Jim & I, and Jim’s Dad with his wife Susie [you can see how close to the window our table was in the 3rd pic]: 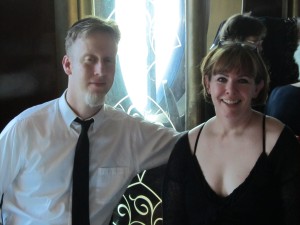 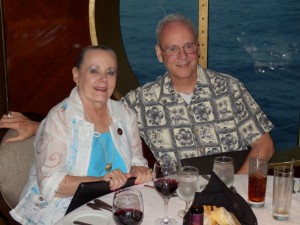 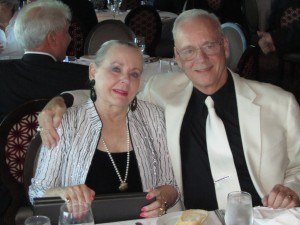 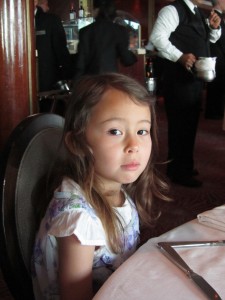 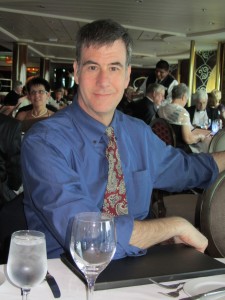 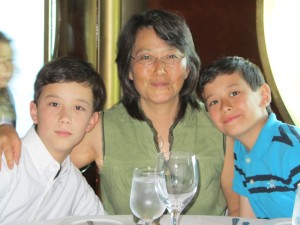 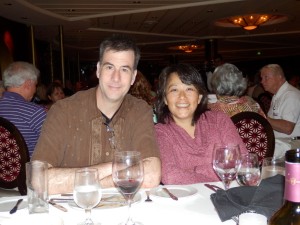 Jim & I are generally anti-social, don’t like crowds, and are in bed by 9 most nights, so during the cruise we didn’t partake in many of the amenities offered by the ship, including the endless bars, casino, theatre/auditorium, or [if we’re being honest here] the spa, indoor pool, gym, shopping emporium, night club, or gift shop…  AND we skipped all the evening shows.  We were total party poopers – HA!  We did visit the medical office twice, does that count?  Once for me [for anti-nausea/sea sickness pills] and once for Jim [ear infection].  And we did make a few appearances at the outdoor pool for family swim time.  The pool was FREEZING.  It’s filled with pumped in ocean water – brrrrr!  And it was unseasonably cold the 2nd week of the trip, at least out at sea, so we often had to wear sweatshirts and windbreakers when outside.

During sea days Jim & I either holed up in our room for countless naps [and many hours of binge-watching Space: 1999] or retired to an obscure side-deck where we could lounge, read our books/magazines/Kindles, and watch for sea turtles [first photo courtesy of Mike Preisman]: 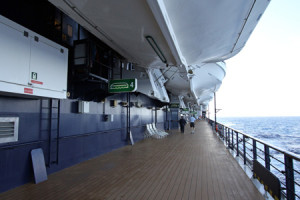 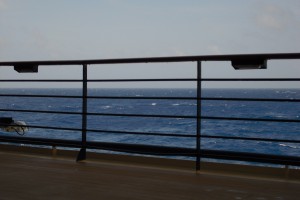 Not many people were ever out there, so it was peaceful, quiet, and [most importantly] shaded from direct sunlight thanks to the row of lifeboats overhead.  Very important for fair-skinned people like Jim and myself!  You can’t see them in the pictures, but there were about 20 lounge chairs on that deck, either up against the wall or pulled over to the railing for the sunbathers.  Many were usually empty.

Here’s 2 selfies Jim took of us on the buffet floor, chillin: 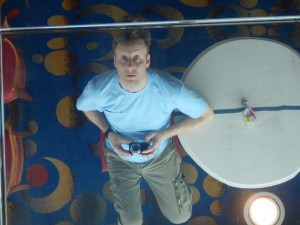 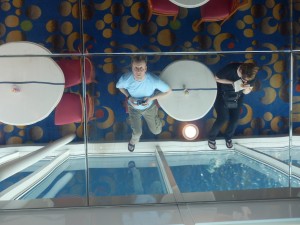 Our first stop on the cruise was Cartagena, Colombia: 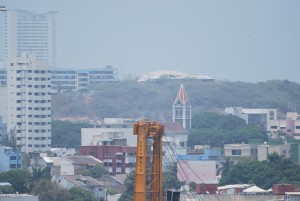 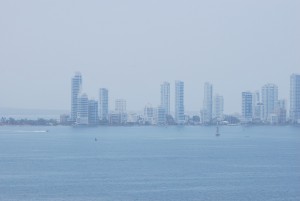 At each stop, the cruise line lets you off the ship for between 7 to 12 hours and offers a list of recommended excursions [which typically cost about $50-80/person].  Or you can do your own thing.  For this trip, Jim and I chose ship recommended excursions for every stop [except Costa Rica where my sister-in-law Tomoko worked with a private eco tourism company to put together a fabulous day for us all!], but I think next time we’d do our own thing more.

In Cartagena we chose the Botanical Garden excursion, and were joined by Jim’s Dad and Susie.  A van picked us up at the dock and drove us to the Garden, along with the other people who’d bought tickets for the same excursion: 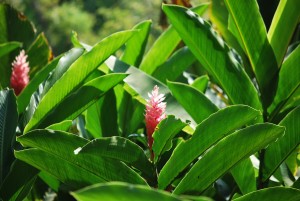 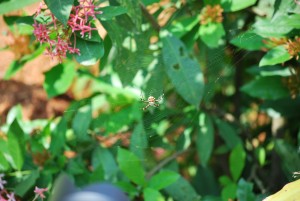 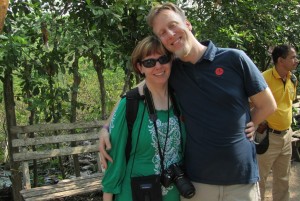 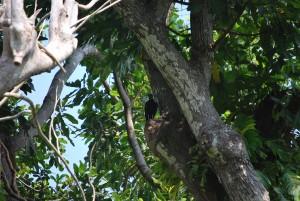 Notice the spider in the 2nd picture *shudder*.  Overall the garden was very disappointing.  Not much was in bloom, and it was kind of a mess.  It wasn’t so much a garden as it was a walk through the rain forest.  But still interesting, all the same.  And the bus ride over was also interesting and included a police officer on board for “traffic control”.  It took about an hour, and wound through different villages.