In case you missed it, here are the previous links for my 2011 trip to Amsterdam:

Amsterdam has many, many canals.  And because of that, many houseboats.  Some were beautiful and  covered in plants, and some had cats and/or dogs lounging on the roofs, although I didn’t get any decent pics of the houseboat pets.  Unfortunately it was overcast a lot of the time I was in Amsterdam.  I always looked forward to the times when the sun shined out from behind the clouds!  Photos always look better in sunlight.  Well, not always, but you know what I mean.  If the sun had been out for my first 4 houseboat pics they’d have been so much better! 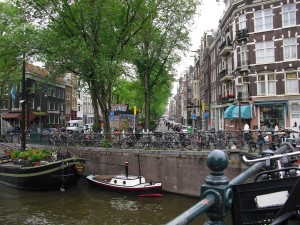 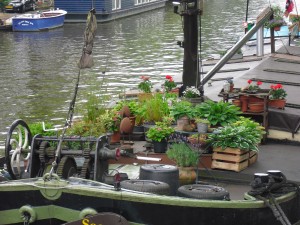 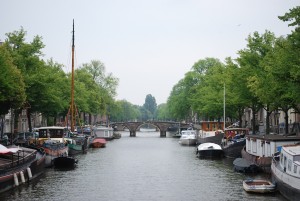 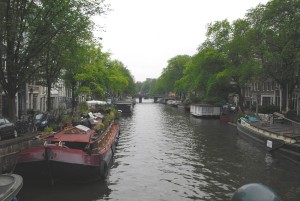 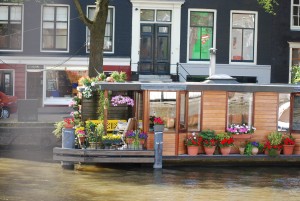 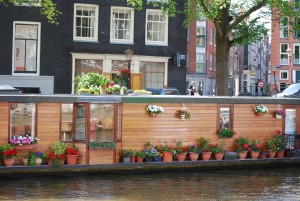 I actually got a pic of that last houseboat, in it’s entirety, from the top of Westerkerk Tower: 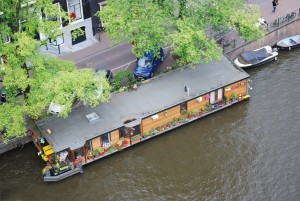 I saw a few oddities as I wandered around the city: 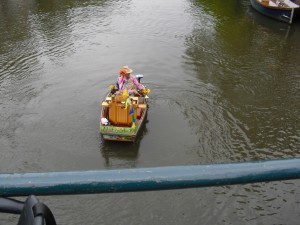 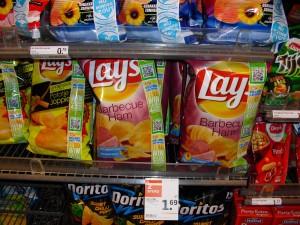 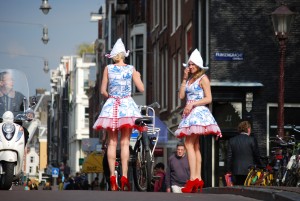 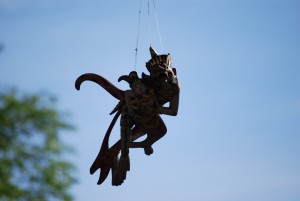 I got chased out of the super market after taking that picture of “Ham” flavored Lays.  They thought I was a spy from a competitor… eye roll [I guess I should be happy they didn’t immediately peg me as an American?].

Towards the end of my trip Seth and I took a wander through the red light district [because “you have to see it once”].  I have to say it wasn’t my favorite place to be!  Lots of scantily clad women in windows trying to make eye contact and kissy faces at you shudder.  But, like the rest of Amsterdam, there were beautiful sights to see, like brick-paved streets and well-used candelabras: 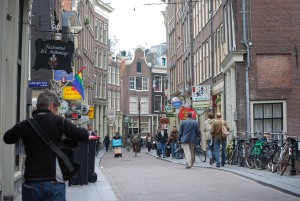 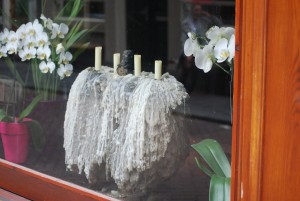 And we saw some funny signs: 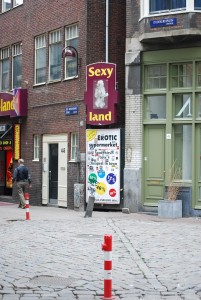 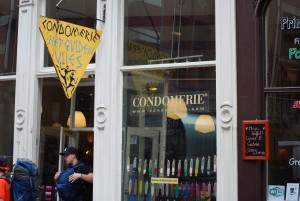 We also took a tour of the Heineken Beer Factory.  All I have to show for it is two grainy pictures: 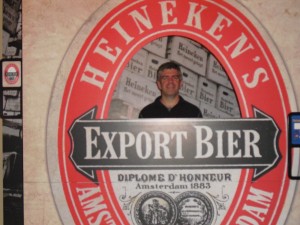 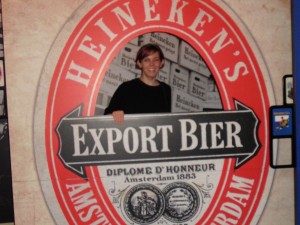 Part of the tour included a beer tasting at the end.  I tried to explain to the guide that I hated beer, so to just skip me.  But instead, he tricked me!  He convinced me to take a glass of nice, frothy Heineken.  He told me [while the rest of the group of about 20 people watched] that if you took a REALLY BIG GULP you’d bypass the hops – which can be bitter – and just enjoy the sweet, tasty beer underneath.  So Captain NumNuts [aka ME] strikes again.  After a big gulp of Heineken I spent the next 5 minutes gagging and making beer faces.  Everyone laughed at me.  But it’s all good 🙂  For the record, it tastes far worse if you gulp it gag.

Oh, and I have this picture, which proves I had “The Heineken Experience” whatever that is: 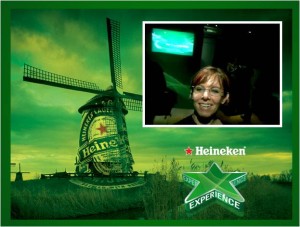 On my last day in Amsterdam I did something I’d promised my team at work I’d do:  eat a raw herring sandwich.  They’re apparently a delicacy in Amsterdam.  I’m on the “herring team” at work, which usually amuses people who don’t work in my industry.  I have nothing against raw fish.  I love pickled herring, and sushi!  Numnumnum.  But a giant slab of raw, moist, bony herring on dry bread with a few pickles and raw onions leaves a LOT to be desired!  If it had had some kind of sauce it would have helped.  Mayo?  BBQ sauce?  Even ketchup would have been an improvement!  And it would have helped if the fish wasn’t covered in a layer of tiny, edible bones which made it look like it’d been forcefully dipped in cat fur.  Bleck!  But I ate it!  Or at least ¾ of it before tossing the rest in the nearest bin… 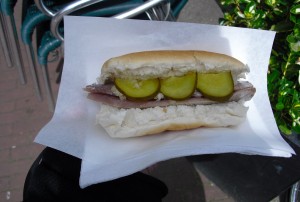 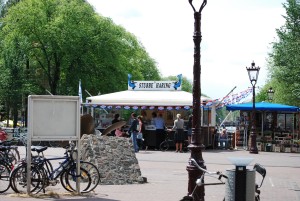 Right around the corner from the raw herring stand was Central Station which is a sight to behold! 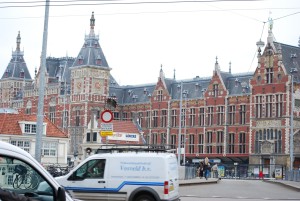 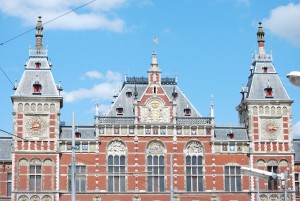 It’s huge!  On one tower is a wind indicator clock: 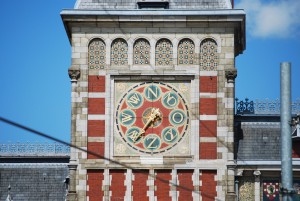 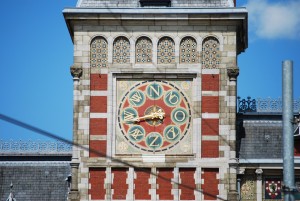 And on the other is a time clock.  In the center is the Netherlands Coat of Arms: 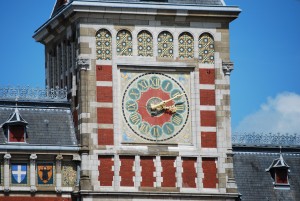 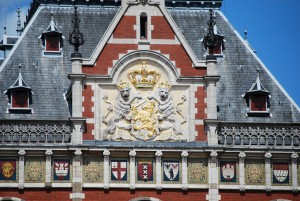 I wish I’d gone inside.  It’s the largest railway station in Amsterdam, and was built in the mid 1880’s!

On the flight home the plane flew around the southern tip of Greenland on it’s way from Reykjavik back to the states.  It’s the only time I’ve seen icebergs!  You can see them best in the 3rd pic.  It helps if you zoom in on all the pics, as they don’t look like much from far away.  I was SO excited to see icebergs!!!  HA!  It was cool to see “pack ice” too: 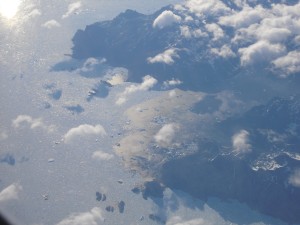 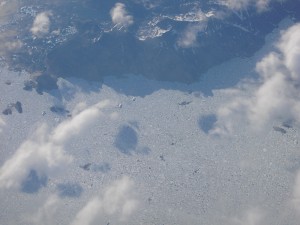 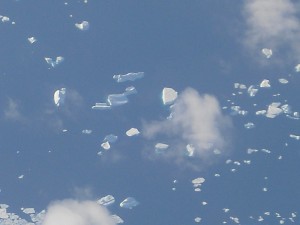 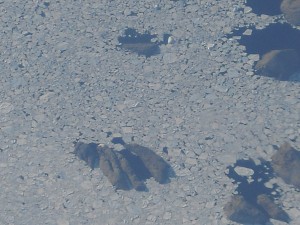 It was a wonderful trip and I’m so glad I went!  Thank you, Seth, for letting me crash with you!  I’d love to go back someday.  And, as a parting note, I think I’m the ONLY person in the history of Amsterdam to visit the city and not eat space cake or spend time in a coffee shop [aka cannabis bar].  Maybe next time!