One of my most favorite things in Amsterdam was Westerkerk Church & Bell Tower.  It was a block from our hotel and we could hear it ringing every quarter hour.  And also, as my brother pointed out AFTER I got lost for 7 hours in the city, you can pretty much see the tower from anywhere.  Wish I’d thought of that… *grumble*!  The tower is very beautiful & distinctive: 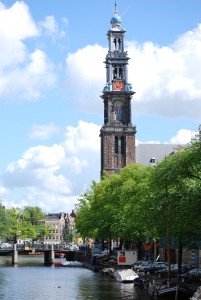 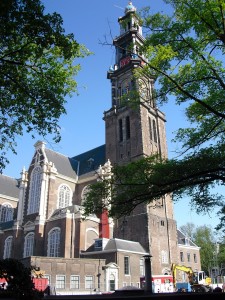 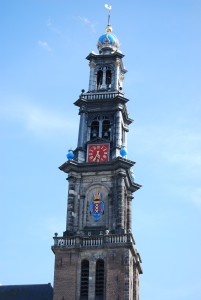 And has really cool history – here’s some snippets from Wikipedia:  The Westerkerk was built in 1620-1631 after a design by the late Renaissance architect Hendrick de Keyser in the Dutch Renaissance style and in the form of a patriarchal cross.  The spire, called the Westertoren (“Western tower”), is the highest church tower in Amsterdam, at 85 meters (279 feet). The crown topping the spire is the Imperial Crown of Austria.  14 of the 50 church bells were made by François Hemony in 1658.  Famous painter Rembrandt was buried in the Westerkerk on October 8, 1669.  The exact location of the grave is unknown, but presumed to be somewhere along the northern wall [he was so poor when he died he was buried in an unmarked, mass grave!  Gawd]. 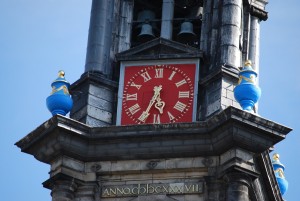 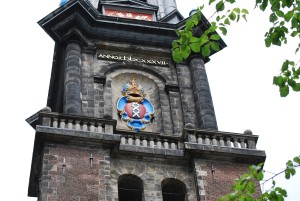 For about $7 you can climb up the tower to the balcony around the top.  So exciting!  It’s a crazy climb – you have to wind your way up steep wooden ladders and hairpin turns and dodge ancient bells and scaffolding.  I loved every minute of it! 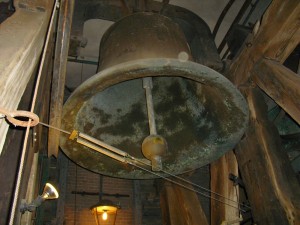 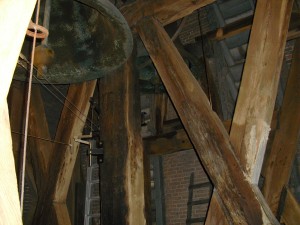 The views from the top were incredible: 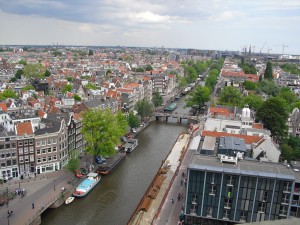 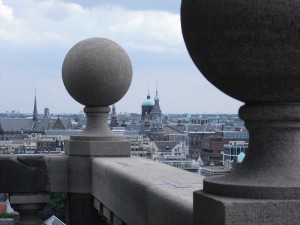 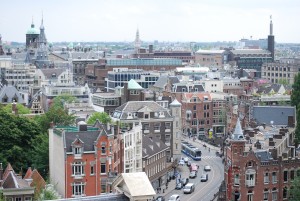 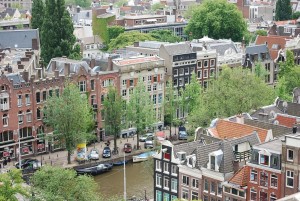 If you zoom in on the first pic you can see the line for the Anne Frank house in the lower right corner.  I went there, too.  It was so hauntingly sad to stand in her bedroom.  There’s still stuff on the walls that she put there.  I haven’t read the book in a long time, but I guess the bells in Westerkerk Tower used to bring comfort to her, especially at night.

We could hear them from our hotel room, too.  Speaking of which, our hotel [Hotel Pulitzer] was amazing!  It’s a 5-star hotel which I’d never have been able to afford on my own!  Thankfully my brother’s company paid for his room and he let me bunk in with him.  The hotel takes up an entire block, and is comprised of actual row houses from the 17th & 18th centuries merged into one facility.  So each room is unique and was a room in an actual house back in the day!  When the hotel first opened it was owned by the grandson of the Pulitzer Prize dude, hence the name.  To get to your room you have to walk an entire maze of hallways and courtyards, take rides on clanky old elevators, go up and down a few steps here and there, and wander through random, public sitting rooms with fireplaces.  It was wild!  It took me so long to figure out the turns, stairs and elevators required to reach our room, but I finally got the hang of it.  Here’s our room: 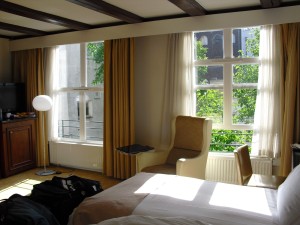 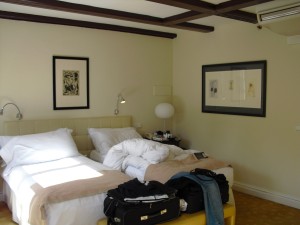 The funny thing was that every day, when we’d meet back in the room before dinner, we’d see that the maids had shoved the 2 beds together.  We figure they were trying to encourage “poor Mr. and Mrs. Verry, who are obviously having marital issues” to get a little closer.  So every evening we’d get between the beds and shove them back apart.  It was funny 😀  That’s my bed on the right in the 2nd pic – I believe I took those pictures the day I spent sequestered in the hotel room, taking baths in the heated-marble-floor’d bathroom and taking naps in the most angelically comfortable bed in the world.  I had a good excuse:  I was recovering from the trauma of getting lost the previous day *nods*.  I have to say it was one of the most relaxing days I’ve ever experienced!  Even though I should have probably been out, exploring Amsterdam…

Here’s a view of our room from the courtyard below [we were on the 2nd floor], a view of the front of the hotel from across the canal, and a view of the green Pulitzer flag that I LOVED seeing at the end of each day, because it meant I’d finally found the GD hotel: 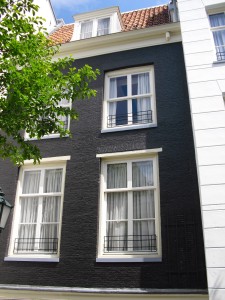 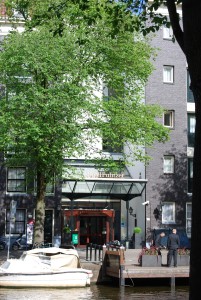 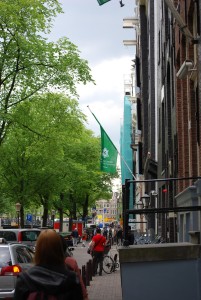 One thing I loved in Amsterdam was seeing the abundance of window shutters of all shapes and sizes: 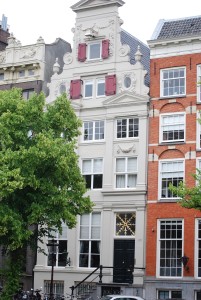 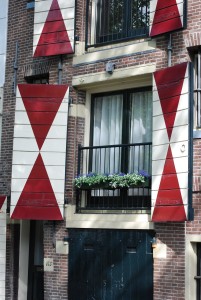 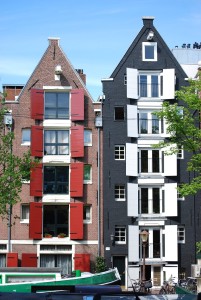 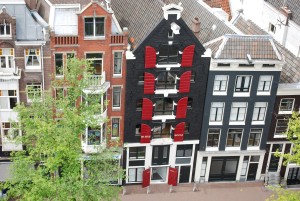 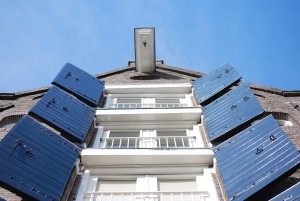 I’m not a fan of “fake”, decorative shutters which adorn a lot of houses these days.  I grew up in an antique house with real shutters.  Solid & imposing.  We latched them closed a few times for hurricanes which was both spooky & cool.  But I liked the variation of shutters in Amsterdam.  They definitely made a statement [and appeared to close and latch properly… *nods*].

I also loved seeing all the church towers and clocks everywhere: 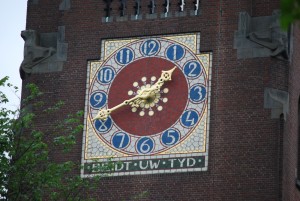 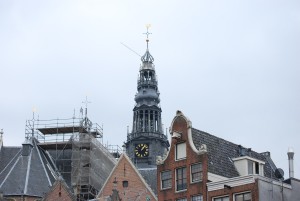 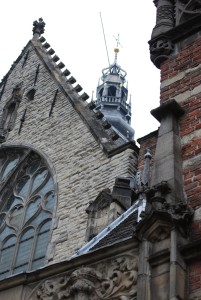 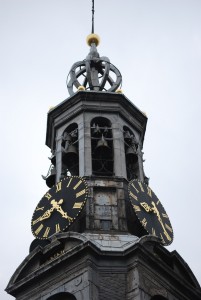 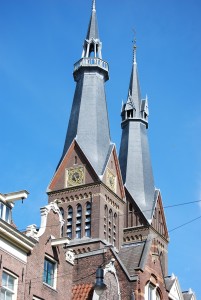 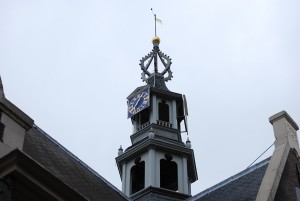 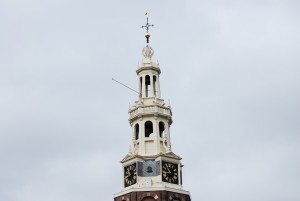 That wraps up Part 2!  I thought I’d have my trip completely covered by now, but there will be a Part 3 next Thursday.  So stay tuned for my uncomfortable foray through the red-light district, and an overview of gagging down a raw herring sandwich [two TOTALLY different stories].