Hubby and I traveled to the Stuttgart area of Germany from 9/30-10/5.  We left home 9/29 but didn’t arrive in Germany until the morning of 9/30, which gave us 5 solid days to visit my German sister Daniela & her husband Joachim.  They came to visit us this past May and it was amazing to visit them and see the amazing country they live in.  I’ve never been to Germany before, and look forward to going back!  They live in Nürtingen, a town southeast of Stuttgart: 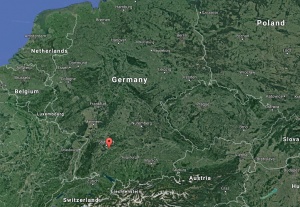 We flew into Stuttgart and they picked us up and were the best hosts ever!  They told us not to rent a car, and they would be our tour guides.  We drove almost 850 miles in 5 days!  It was so exhausting, but so worth it.  Hubby and I are not used to that… when we vacation in Hawaii we spend half the time either napping in our room or napping on the beach 😀 .  But it was a fantastic trip and my German family were so much fun to spend time with!  They really ensured we had the best possible time.  Here are some views of southern Germany from the plane: 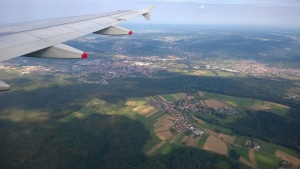 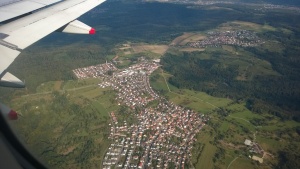 I thought it was so neat how each town is divided by a huge amount of green space and forest.  Very different than here.

By the time we checked into our room, we asked them if we could crash for a few hours, as we’d been flying all night and didn’t get any sleep on the planes [we flew from Boston to London Heathrow, and then to Stuttgart].  They humored us and left, then picked us up at 4pm.  Here’s the view from our little deck: 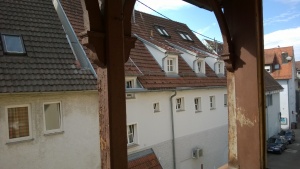 They took us first to see their apartment where we got to meet Carlos, their very [very] large & happy cat.  Here he is eating his dinner of raw meat and then enjoying being the center of attention: 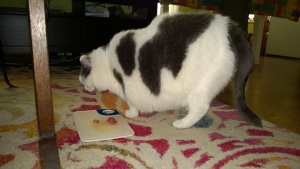 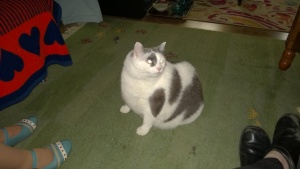 Followed by some quality relax time on the couch – look at that contented smile: 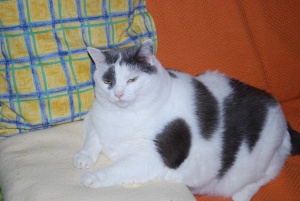 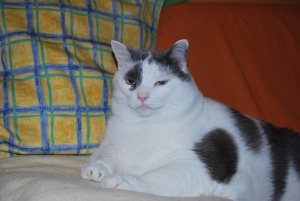 Then we drove a few minutes away to see their gardens [they own parcels of land which they have converted into amazing gardens].  4 additional cats live on their land, and Daniela has made them so many cat houses and lookout posts and boxes and beds and house on stilts – it makes my catification look very tame!  The gardens and the views from the gardens were amazing.  I didn’t get great pictures because it was very overcast.  And the cats were all hiding.  In the top left of the 1st picture you can see Castle Hohenneuffen in the distance – that’s where we had dinner our first night [!]: 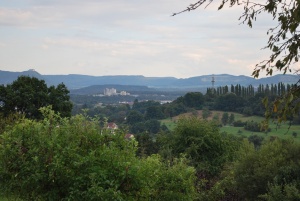 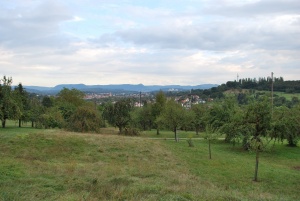 Sitting area & Daniela’s craft house which she built from scratch this summer – it’s where she does all her stained glass work and mosaics: 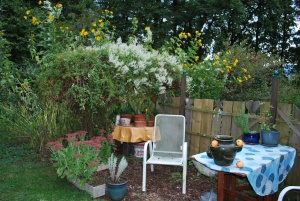 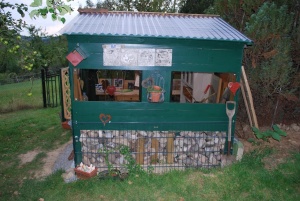 Hubby got a picture of me posing with the inspiration for my cat tattoo – the stained glass window Daniela made for her cat house: 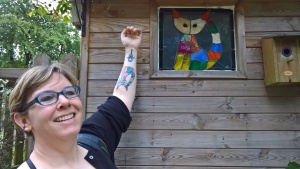 Then we drove to Castle Hohenneuffen which Google Maps describes as a “ruined hilltop castle with views”.  And a restaurant 🙂  It was about 20-25 minutes southeast of Nürtingen.  Castle Hohenneuffen was built between 1100 & 1120 and is located in the Swabian Alps.  It began as a private residence for different Lords and Counts but was converted into a fortress from the late 1300s through the early 1500s.  During that time it survived much warfare and housed many prisoners of state.  It became too costly to continue renovations and it was to be demolished in 1801.  However, demolition was halted in the 1830s and the remains were opened to the public in 1862.  It’s roughly 2,400 feet above sea level.  The view from Castle Hohenneuffen is utterly amazing: 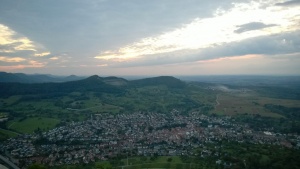 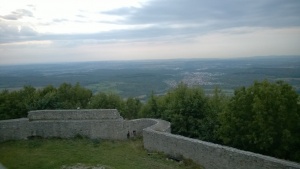 And the grounds and restaurant were incredible.  Jim and I both had the vegetarian option which was pesto Parmesan pasta with sauteed tomatoes and pumpkin: 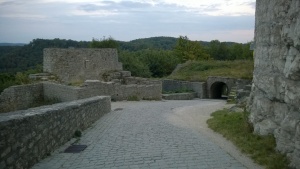 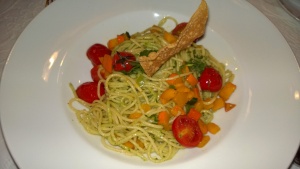 We noticed a lot of menus in Germany had pumpkin featured.  It was very good, tasted mostly like winter squash.  The introduction on the menu was neat to read.  They had both German & English versions which helped a lot.  Although one of the translated items made us laugh: 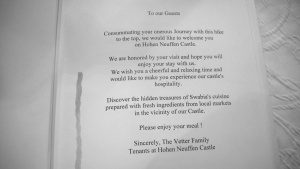 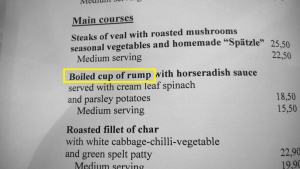 We had a small giggling fit over “cup of rump”.

We spent an hour in the car & drove 33 miles on Day 1.  Here’s our route from Stuttgart Airport to Nürtingen to Castle Hohenneuffen & back to Nurtingen: 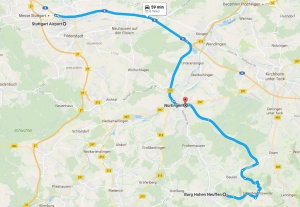 I found it interesting, thanks to thetruesize.com, that Germany is only a little larger than New England: 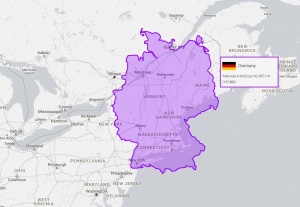 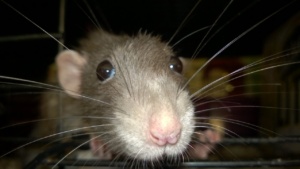