Hubby and I have been binge watching Tiny House Hunters on the HGTV channel for the past couple months.  It’s pretty much thanks to Jessica from Cape of Dreams – she posted in November about cleaning her basement and mentioned the show was part of her inspiration for paring down and decluttering.  I said to hubby “hey, maybe we should watch that!” and he said “Duh!  I’ve been suggesting it for months!” to which I replied “Oh…”.  So, after watching a gazillion episodes, it has inspired me/us to do the same! 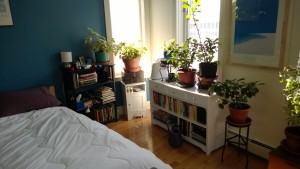 Hubby started the bedroom decluttering last week by moving the 36″ TV down to the basement – I think we’ve watched it 3 times in 3 years.  I started on Saturday by boxing up 3 stacks of books to donate to Goodwill, which left the white bookcase across from my side of the bed nearly empty [see above picture for a “before” shot].  I moved the books I wanted to keep* to the black bookcase next to the bed, and hubby helped me carry the white bookcase downstairs and outside to the curb with a “FREE” sign on it.  It was gone within 5 minutes!  Sweet.  It was cheaply made and starting to sag, so no loss there.  Then I moved the green bureau from the corner near the bathroom over to where the white bookcase used to be, and covered it in plants: 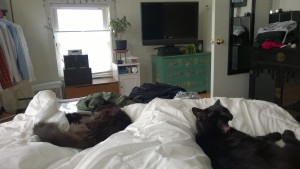 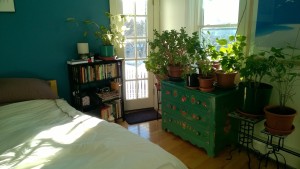 Then I moved the cat tree over to where the green bureau used to be, and added a small rack beside it for my surplus sweaters: 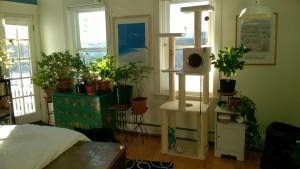 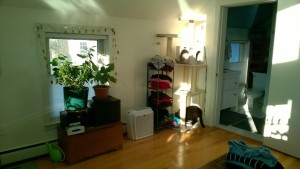 Next I moved the black t-shirt chest from it’s awkward position between the 2 bedroom doors [one leads to the hall, the other to the bathroom] over to the window where the cat tree used to be, and covered it in plants: 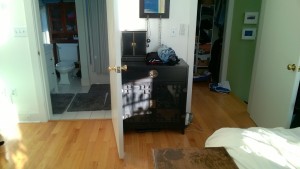 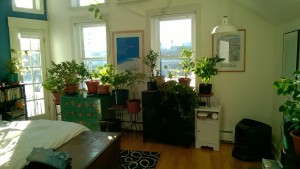 So basically, all I did was get rid of the white bookcase and re-arrange the remaining furniture to create a much more open space.  But it makes a huge difference!  Here are 2 more “after” shots [compare the left one to the one directly above it for more wow factor]: 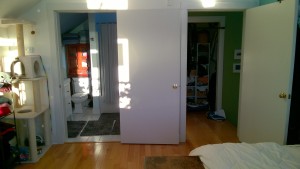 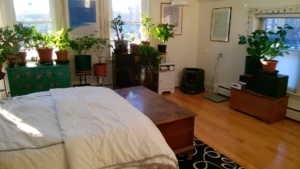 I will be posting soon about the decluttering efforts in the girl cave and living room.

As a side note, hubby and I are actually discussing going tiny for our next house.  Tiny = anything 500 square feet and under.  The Tiny House movement is pretty inspiring, and really makes you realize you don’t need so much stuff.  I told him as long as he lets me construct a 500 square foot workshop next to our 500 square foot house, I’m in *nods*.

* I should mention that I LOVE BOOKS and LOVE READING.  I read probably a book a week.  But after getting my first Kindle I decided I was done with paper books, and have since re-purchased many of my favorites in digital format and donated the paper copy to Goodwill.  I have always been irritated by how much space actual books take up.  However, I know many people feel the opposite and prefer bookcases full of books!