In early January the plumber came to the house because our living room was 47 degrees.  He was able to bleed the system in the basement and get the air out of the pipes.  The living room baseboards started warming up immediately!  While he was there we had him look at the dining room/girl cave zone, which had never worked.  He bled that system and a few moments later THOSE baseboards started getting warm!  Yay!  But 2 days later they were cold again.  Un-yay.  We called the plumber and he said the dining room/girl cave zone probably needed to be bled a few more times before all the air was removed from the pipes.  He said he’d send his guy back, but no one ever showed.  The living room heat continued working fine, so tracking down the plumber became a lower priority.

Then I got busy selling stuff on Craigslist and eBay, and we got slammed with 4 Snowmaggendon’s in a row.  4?  5?  It’s hard to remember after the first few.  And now we’re in the midst of a super deep freeze.  It’s 1° out with a -31°F windchill.  And our house is SUPER drafty.  When we woke up today it was FREEZING!

Bedroom [the thermostat was set to 67°]: 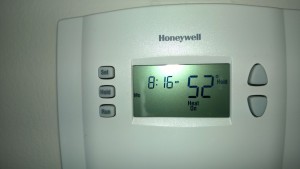 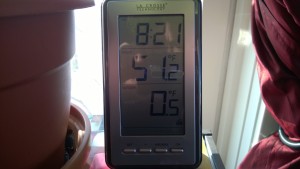 Living Room [the thermostat was set to 60°]: 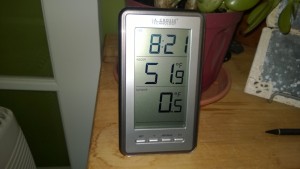 I was home today for the President’s Day holiday [Jim had to work], so I decided today was THE DAY I was going to do something about our cold house.  In addition to the dining room/girl cave zone not working, we also have super drafty windows in the bedroom and living room.  So at 7am, when Jim left for work, I drove to the hardware store and picked up a bunch of window insulation kits: 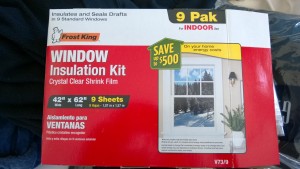 When I got back home I decided to tackle the heat in the dining room & girl cave first.  I had watched closely when the plumber bled the system in January, so I thought I knew what to do.  Just to be sure, I watched some YouTube videos, which helped clear up some questions I had.  Then I took a deep breath and headed down to the basement.  I ran my hand along all the pipes leading to the different zones in our house [the house is split into 3 condos] and they were all hot except for our dining room/girl cave pipe.  Those green things mark the different heating zones of our house: 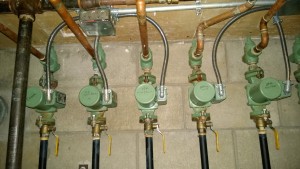 Each zone has a “return”, which is where you drain the air [thankfully they’re labeled – but even if they weren’t, the dining room/girl cave pipe was the only cold one]: 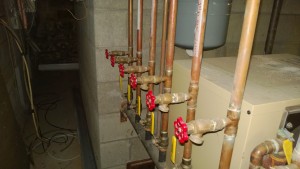 I shut off the valve [yellow thing] for the dining room/girl cave return: 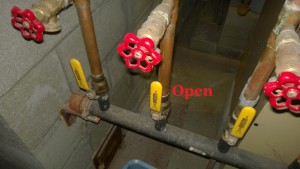 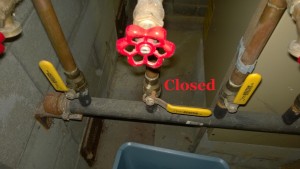 Put a bucket under the spigot, then turned the red handle to let out the air [which comes out with the water]: 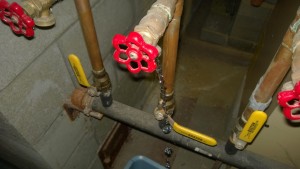 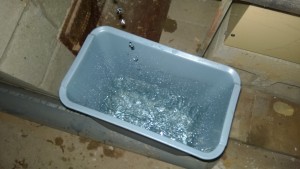 I learned on YouTube that you should let the water trickle out slowly otherwise it won’t push out the air.  The YouTube guy said to “be patient”.  I’m not good at being patient.  But I drained 2 buckets of water [which took about 20 minutes], turned the red spigot off, turned the yellow valve back on, and felt the dining room/girl cave pipes – they were getting hot!  I went upstairs and checked the baseboards – they were getting warm!  And 2 hours later they were still nice and warm!  Yay!

When the plumber was bleeding the air from our system he also fiddled with the valve above the water expansion tank: 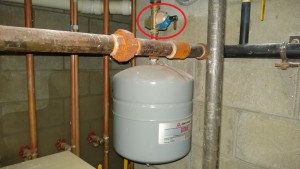 So I figured I should fiddle with it, too…  Even though I had no idea what it did.  There was a bit of water leaking out from the pipe joins around the expansion tank valve, and when I tripped the valve I could hear air hissing out.  After about 5 seconds it stopped.  I figured that was part of the process of draining air from the system, so I tripped that valve a few more times and each time about 5 seconds of air hissed out.  Once I was done bleeding the system and had turned the red spigot off and the yellow valve on, I tripped the expansion tank valve one more time, let out a few more seconds of air, and a few minutes later the pipe joins around it stopped leaking.  Phew.  This is why I hate plumbing… I’m always afraid the pressure is going to build and the whole thing’s going to blow like the hotel in The Shining.

After relishing in my success long enough to down a mug of tea, I headed upstairs with my window insulation kits.  The bathroom window and 3 of the bedroom windows were the draftiest.  Window insulation kits are monumentally frustrating!!!  If you’ve never used one, you have to stick double-sided taped [supplied] around the window frame, then press the plastic sheet against it.  However, the plastic sheet never sticks well to the double-sided tape until you aim a hair dryer at it.  But you can’t do that until the sheet is in place.  I kept getting the top and sides done, and then when I tried to stick the bottom of the sheet to the tape, the top and sides would rip down.  GAH!!!  I finally got them sealed and blow-dried: 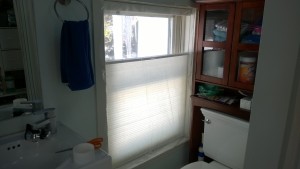 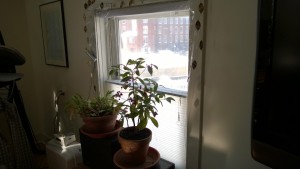 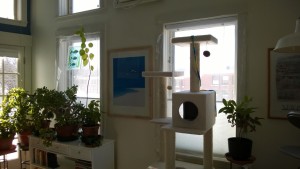 Not the prettiest stuff, but we’re dealing with so much wind coming in that it’s causing the plastic sheeting to bow inwards like a Spinnaker sail, taking the heavy glass fish decoration with it!  I stood still and took these 2 shots as the wind gusted, pushing the plastic in and making the fish decoration swing – it’s crazy!  I finally took the glass down, I don’t want it to break! 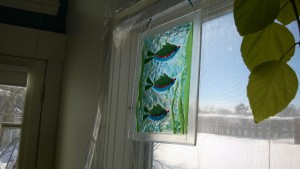 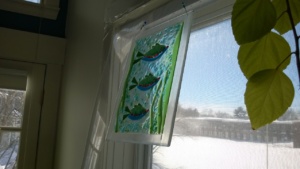 The plastic is pushing against my plants every time the wind gusts, too: 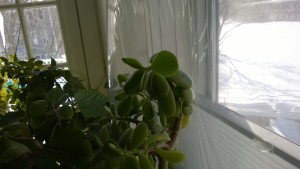 As I was sitting downstairs sipping more tea I heard a loud pop/bang!  I ran upstairs to see which window plastic had exploded.  It was the smaller bedroom window, facing the Riverwalk foot bridge.  I had to fortify the bottom with heavy duty weather tape: 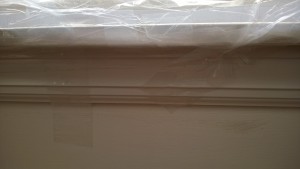 While I was at it I fortified the bottom of the other windows, too, since the sheeting was starting to tear away from the tape.  A few hours later the bedroom started getting warmer!  Currently it’s 65° in there!  Hooray!  That’s WAY better than 52°!  The plastic sheeting is still bowing inwards on all 4 windows as the wind continues to gust outside, but it’s doing it’s job and keeping the cold air OUT.  Replacement windows are at the top of our list of home repairs that need to get done!

This morning the bedroom was 67° just like it’s supposed to be: 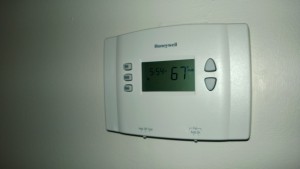 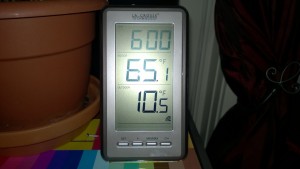 Amazing! The baseboards in the dining room & girl cave were both warm this morning 🙂 It’s the first morning I’ve ever walked into the girl cave and felt warmth!