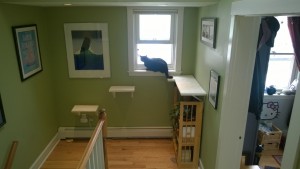 They were set up to provide a staircase to the windowsill and main platform, and they’d been that way for months.  I’d put the first step low enough so Bonkers could jump up on it [which he never did, even with a small stool placed under it to give him even better access… *grumble*].  Darwin, meanwhile, skipped the lower step entirely and went straight for the higher one before gracefully leaping to the main platform or settling on the windowsill.

So a few weeks ago I decided to move them to new locations where they’d be more useful.  I moved one to the right of the main platform at a height halfway between the floor and main platform.  This allows Darwin less strenuous access, but wipes out any chance of Bonkers getting up there.  As a consolation prize to Bonkers I moved the 2nd one to the girl cave under one of the windows: 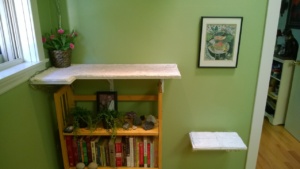 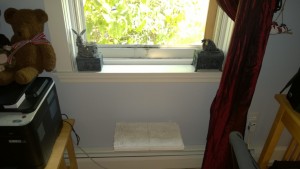 Then we unexpectedly adopted Birdie from the shelter.  And quickly realized she needed “Bonkers proof” places she could hang out, since Bonkers has stalked, chased & generally terrorized her since we got her.  We’re working on that, and Bonkers is starting to mellow out.  Once Birdie realized Bonkers couldn’t jump higher than about a foot, she quickly adopted the cat platform in the upstairs hallway and my art table in the girl cave as her main hang-outs.

So Monday after work I decided to move the small platform from the girl cave back out to the hallway [Bonkers never used it anyway].  I placed it on the original wall, at windowsill level, to make it an extension of the main platform.  But I had an ulterior motive:  it’s now strategically placed to give Birdie direct visual access to the upstairs hall, the stairwell, & the downstairs hall from one spot: 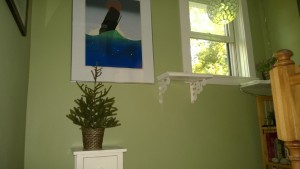 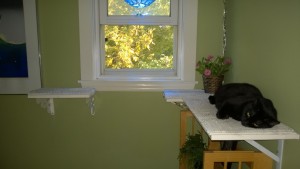 Providing her with an “early Bonkers warning system”: 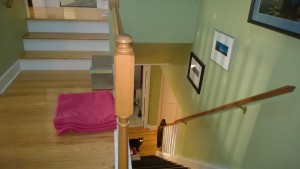 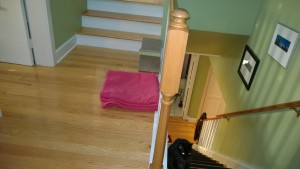 And yes, that would be Bonkers slinking upstairs to stalk Birdie while I took pictures.

I was hoping the new platform would pique Birdie’s curiosity immediately, but she ignored it.  Typical.  I put some treats on it, which worked briefly… before she went back to ignoring it: 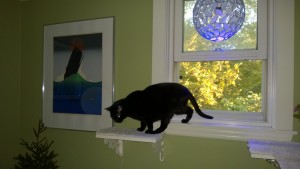 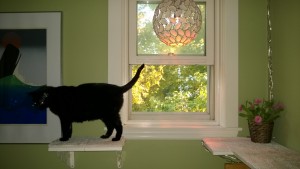 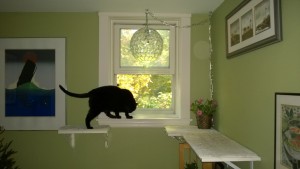 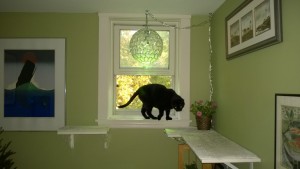 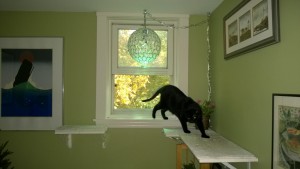 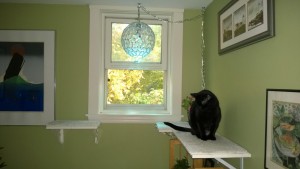 But then, after dinner [about 2 hours after I’d put it up] we looked upstairs and saw this: 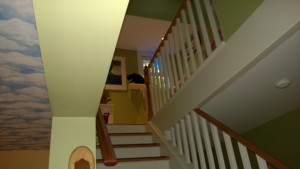 Can you see her up there?  Here’s a closer look: 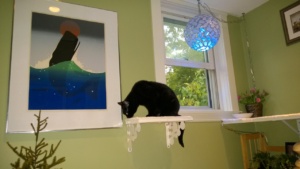 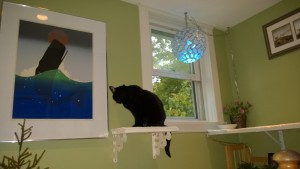 When I originally set up the steps I used Molly Bolts [a type of drywall anchor]: 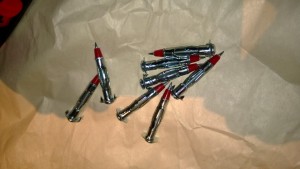 But I had issues with them not “activating” fully behind the drywall.  My professor at Whittier Tech last spring recommended I try drywall screw anchors: 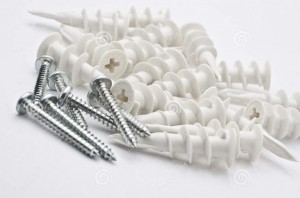 So that’s what I used when I originally moved the platforms a few weeks ago and they worked really well!  I just drilled ½” holes in the wall, used a screwdriver to screw the anchors into the drywall, then attached the cat platform to the wall using the included screws.  Much easier to use, and MUCH easier to remove!  Just use a screwdriver to unscrew them from the drywall and patch the holes with Joint Compound [versus Molly Bolts which you have to actually hammer deeper into the drywall before patching the holes with Joint Compound].  So on Monday I used more drywall screw anchors and they also worked perfectly.

As an amusing aside, yesterday morning I came out of the bedroom to a horrific sound & a hilarious sight:  Bonkers trying to get up on the lower platform to finally “catch” Birdie.  The best he could do was get his arms up on it, while pitifully looking up at her and doing a combination howl/mewl/meow.  Poor Bonkers!  Meanwhile Birdie just stared and growled until he gave up – good girl! 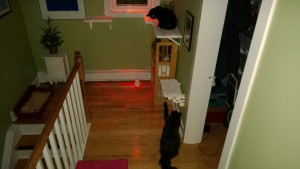 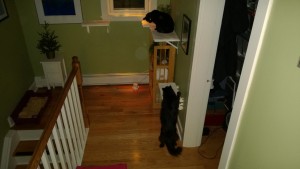 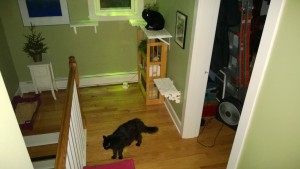