After adopting Birdie from the shelter last month, we quickly realized she needed “elevation advantage” to thwart the relentless pursuit of our older, rickety cat General Bonkers.  He can’t jump, so anywhere over a foot off the ground is usually safe, but she prefers to be about 4 feet up.  She’s been using the upstairs hall cat platforms and my art table in the girl cave as her main hang outs.  But we want her to feel safe downstairs, too.  We spend a lot of time in the living room and want her to feel like part of the family.  We carry her downstairs almost every day and put her either on the dining room table or on the couch, but within 5 minutes she’s galloping back upstairs, usually with Bonkers hot on her tail.

So I’ve been pondering building a downstairs cat platform for her, but wasn’t sure where.  Last weekend I decided the downstairs hall outside the laundry room would be perfect.  It’s sandwiched between the kitchen and living room, and has a direct line of sight both up the stairs and down the hall to the front door.  And with the stairs being a few feet away, it would give her a quick escape route if she felt threatened.  By adding a small wrap-around portion, I could incorporate the top of the living room wine rack [once it’s cleaned off], giving her access to the living room where we spend most of our free time: 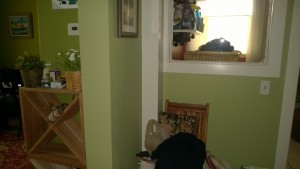 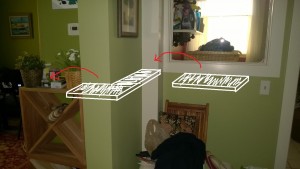 I measured and marked the new platforms on ¾” plywood scraps I had in the basement, then used my circular saw and Abbie’s Black & Decker WorkMate to cut them down to size: 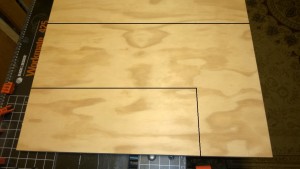 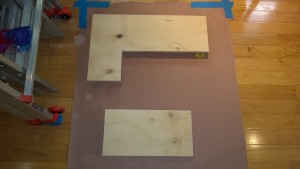 I tossed 2 coats of white primer on them and let them dry for a few hours.  I decided to skip the actual “paint” step, at least for now.  These are hypothetically temporary platforms until Birdie is more acclimated to being downstairs [although I’m kind of hoping they’re permanent!].  Before bed I attached shelf brackets.  The only ones I had on hand were red ones from IKEA, but I think they add character!  There’s a 5th [white] bracket in there, too, which will provide support for the wrap-around part: 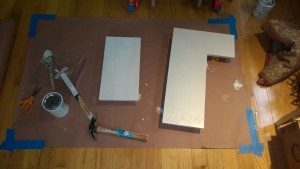 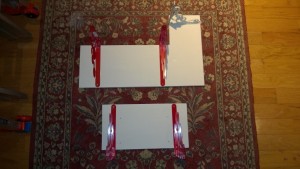 After work on Monday I held them up to the wall, used a level & pencil to mark each bracket hole, and drilled test holes into the walls.  I hit studs with 4 of the 10 test holes – score!  Hitting studs in any of our walls is miraculous…  I swear some of our walls are made of solid cement while others are just drywall nailed to dark matter.

I decided to hang the smaller platform first.  I was dealing with straight drywall here [no studs] so I grabbed my 5/16″ drill bit, drilled 4 large holes, and screwed in 4 plastic drywall anchor screws: 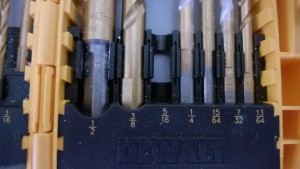 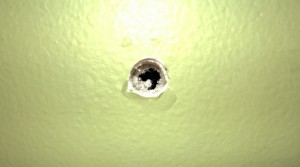 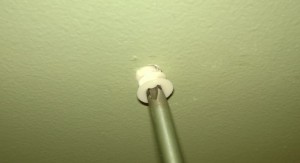 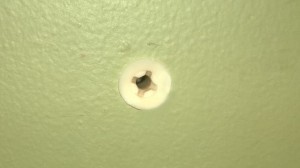 Then used my cordless drill to attach the platform firmly to the wall via the anchors.  And I can guarantee you it’s secure:  I bent down to grab a wayward drywall anchor and stood up fast right under the platform.  OUCH.  My head had an egg, but the platform didn’t budge!  Attaching the larger, wrap-around platform to the wall was actually easier because the 4 outer screws drilled straight into studs.  For the 2 in the middle I used a ¼” drill bit and “hammer-in” anchors.

Once both platforms were securely attached, I cut up an old bathroom rug into soft, squishy rectangles and secured them to the platforms with string.  Behold the [almost] finished product: 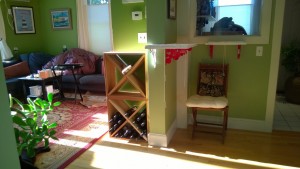 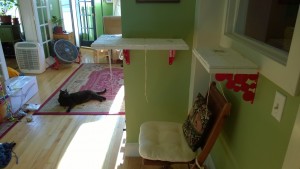 And a few minutes later with the chair swapped out for a sturdier one, and some cat toys added: 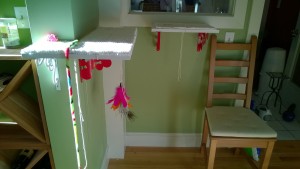 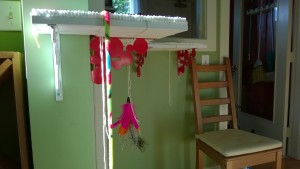 I actually like the red brackets!  They wouldn’t have been my first choice, but I think they look really cool!

I was so excited to bring Birdie down and see how she liked her new platforms.  She was initially weirded out, but soon realized [1] she was SAFE [Bonkers was patrolling the floor below but couldn’t reach her], and [2] she could see everything and everyone from her new perch!  She ended up hanging out on the platforms for a couple hours: 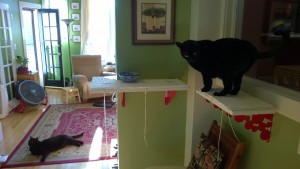 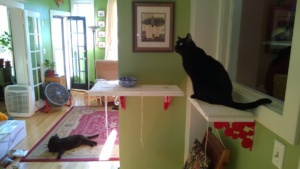 By the way, that’s Darwin sprawled on the living room floor in the background.  He likes to be involved in everything going on around the house!

I even got Birdie to play a little bit – she attacked one end of a fleece snake toy while Bonkers was on the ground playing with the other end! 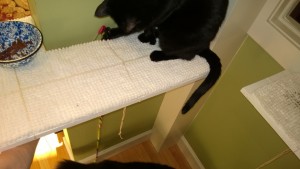 And Tuesday morning she trotted down the stairs right behind me!  She’s never done that!  She glanced up at the platforms but then raced back upstairs. Which brings me to the issue I’m currently dealing with, and why the platforms are “almost” finished.  The chair under the platforms isn’t providing the support needed for the cats to safely jump up to the platforms and back down again.  It’s a sturdy chair, but it’s a bit too low, creating an awkward angle.  We used Darwin as our test bunny Monday night, and he wasn’t too pleased to have to jump from the chair to the platform.  To get down he bypassed the chair completely and went straight for the floor.

So I’m plotting the construction of a small “step” to attach to the wall so the cats can have better access.  It would mimic the one they have in the upstairs hall and look something like this: 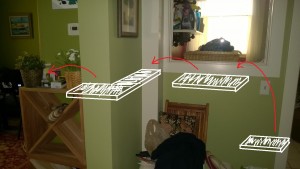 So far Birdie hasn’t used the platforms on her own, but we carry her down each morning and she eats her breakfast on them [Darwin & Bonkers eat their breakfast in the kitchen, a few feet away].  And each evening we bring her back down, and she usually has a nice snooze on the platform before heading back up to her lair.  Here’s Birdie right now, as I type, enjoying the new downstairs platforms!  So sweet! 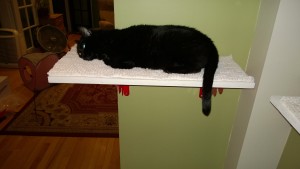 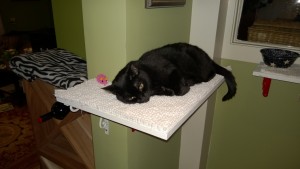 It’s taking a while for her to get used to us, our house, and the boys.  But every day we notice small progress.  Friday after work I walked upstairs and for the first time EVER, she was lounging on the floor out in the open!  She’s never on the floor – she’s always up on something to avoid Bonkers.  But I think she’s starting to get more confidence!  And today she came downstairs all on her own!  Without us anywhere near her!  She sat on the bottom step for a few minutes before galloping back upstairs.  She’s an awesome little kitty and we want her to feel like this is as much her house as it is Bonkers’ and Darwin’s.  We love her so much!  Sometimes I wake up in the middle of the night and she’s curled up between my legs or next to my chest – I love that!  I pat her and she purrs and stretches her double paws out – it’s so adorable 🙂

Thankfully, Darwin has always been a sweetie to her.  He respects her space, and she in turn accepts him. Last week we came out of the bedroom and found them both asleep on the upstairs platforms [!] – Birdie’s on the left and Darwin’s on the right: 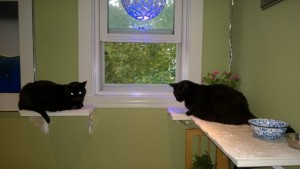 Unfortunately Bonkers has been more challenging.  He stalks and intimidates her and likes to keep her within eyesight.  As an example, while Darwin and Birdie were snoozing on the platforms the other morning, he was on the floor keeping a close eye on the situation: 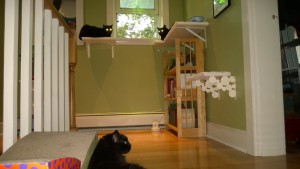 I just keep reminding myself that when we first brought Bonkers home from the shelter, Darwin intimidated him and they fought all the time.  But now they get along like brothers – I really hope he and Birdie can work things out!