This is the first part of a 3-part mouse story.

It all started back on December 3, 2019, when Darwin spent 2 days staring fixedly at the living room baseboard heater, cocking his head from side to side: 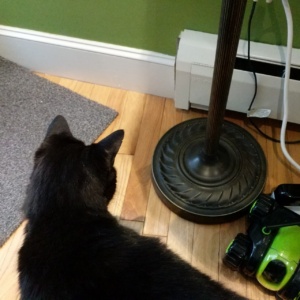 On the 2nd day I lay on the floor next to him and could hear scratching.  I don’t usually set mouse traps out in the winter because I can’t bear to put the little rodents out in the cold when they haven’t had time to build a warm nest or collect food.  Whenever I’ve set traps in the winter I’ve let the mice live in hamster cages until it’s warm enough to release them, usually April or May.

But the crunching and munching I could hear through the baseboard heater was a call for immediate action.  The part of the basement directly below the heater is a ledge at the back of Kathy’s cage.  I got up on a step ladder and could see obvious mouse activity: 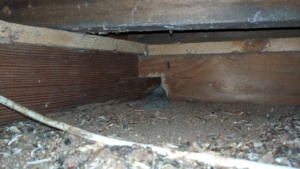 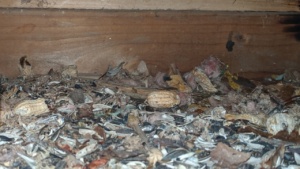 It looked like it had been going on for a long time: 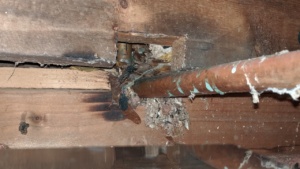 I set out some humane mouse traps [similar to THESE [#affiliate]] and caught a mouse that night!  She was very perplexed to suddenly find herself in a hamster cage.  I used this photo to determine she was a girl, because NO TACKLE: 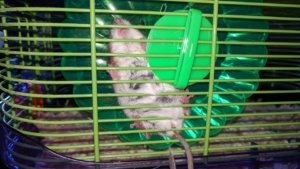 She took very well to cage living, especially the wheel: 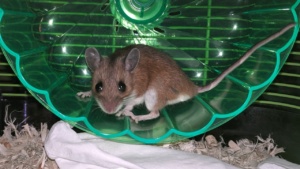 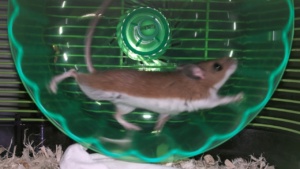 I kept setting traps out each night, but wasn’t able to catch any others.  I didn’t want her to be lonely for the next few months so I set a trap in a different part of the basement.  That night I caught her a companion.  They both looked the same “down there” so I put the new mouse in with the original mouse.  They got along great: 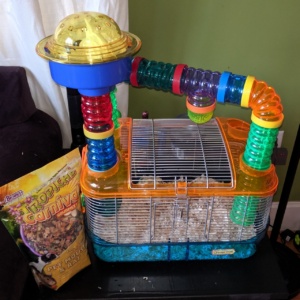 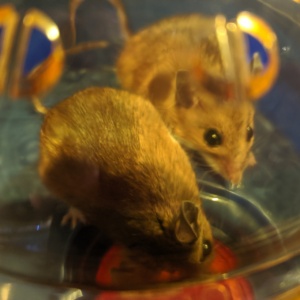 On cage cleaning day they cracked me up.  They were so curious to find themselves in a temporary cage.  Here’s a pic of the same moment in time, with their heads sticking out one end [into the temporary cage] and their butts poking out the other end: 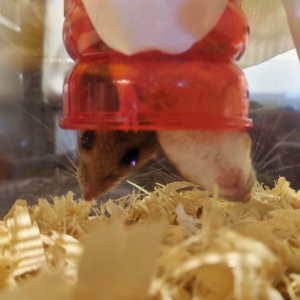 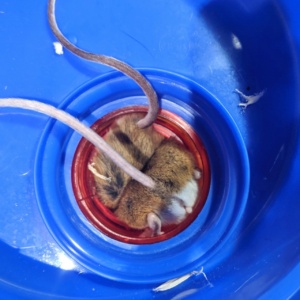 In mid-March Christyne brought me a mouse that a friend had dropped off with her.  It was caught on the streets of Lynn, MA.  I kept it in a separate cage from the original two.  Darwin spent his days absolutely fascinated by it: 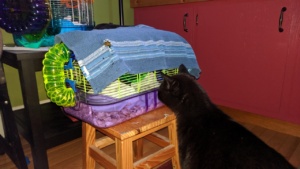 It was a different species of mouse than the ones I’d caught in December.  I believe Christyne’s mouse is a house mouse [even though it was caught outside] and my mice are wild field mice [even though they were caught inside].  I planned to release it in the Spring with the other mice, but her mouse was MISERABLE.  It spent the days gnawing the bars trying to get out: 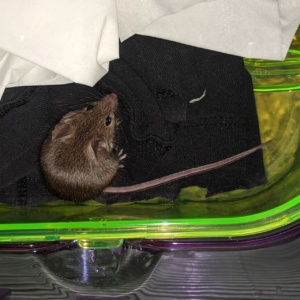 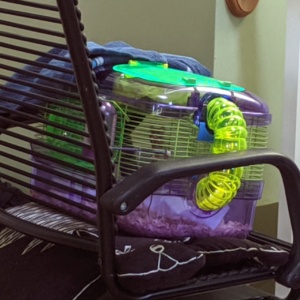 So I released it a week later, into the March cold.  It seemed crueler to keep it in a cage than to put it out in the cold.  It was a hard decision for me to make, but I think it was best.

Meanwhile, the original 2 were quite content with cage living.  I think they appreciated the water and food service, the clean cage, the fresh Kleenex nesting material, & the nice warm temperature of the living room.

Near the end of March one of them started acting weird.  She kicked the other mouse out of the sleeping chambers and made a huge nest out of Kleenex.  I should have known [!!!] what was coming, but I still though they were both girls…  After a week of not seeing the nesting one in the sleeping chamber, I carefully opened the lid, peeked under the Kleenex, and yelled “HUBBY… WE HAVE A SITUATION!!!”

Four adorable baby mice!  I didn’t take any pics when they were pinkies because I didn’t want to stress out the mom.  I quickly set up a 2nd cage for the Dad, to keep him away from the babies in case he decided to hurt them: 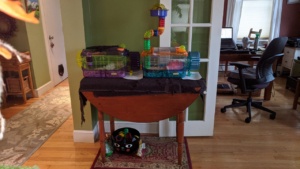 FROM FACEBOOK, 4/13/2020:  “I just realized the male mouse’s cage door was open all night.  There were cracked sunflower seeds out on his front veranda, so he was obviously out, checking out his surroundings.  I was sure he was long gone.  But nope, back asleep in his cage, up in his sky tower.  He has NO intentions of being released.  He’s enjoying his lush, country club lifestyle way too much!”

FROM FACEBOOK, 4/17/2020:  “Last night the babies left the nest and followed mom down to the food and play area of the cage.”

After the babies were born, I did some internet research on sexing wild mice.  As an aside, sexing pet rats is EASY because their tackle is HUGE.  I learned that [1] it’s nearly impossible to tell the difference between male and female wild mice – d’OH!, [2] the easiest way to sex baby mice is to look for nipples – males don’t have any [by the time I read this it was too late, their fur had already grown in], and [3] baby mice will open their eyes and start leaving the nest around 3 weeks old.  Since I couldn’t sex the babies, I just enjoyed them.  They were so fun to watch!  The Mouse Mom was such a good mommy: 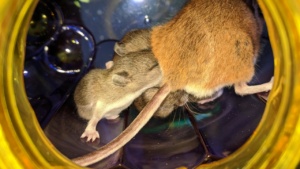 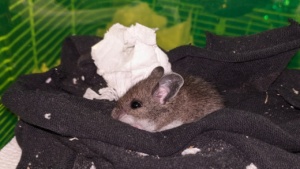 Darwin became fascinated by them again.  All those little babies running around, squeaking & playing: 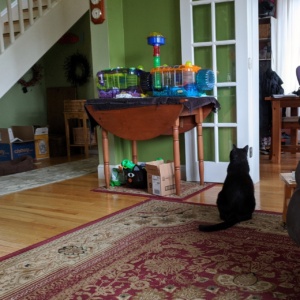 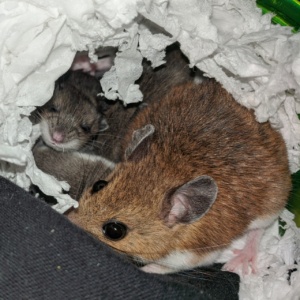 THEY WERE SO CUTE: 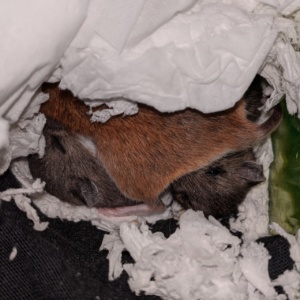 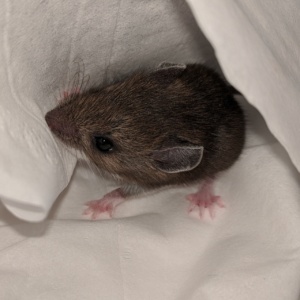 Mouse Mom is reddish brown, the babies are darker brown: 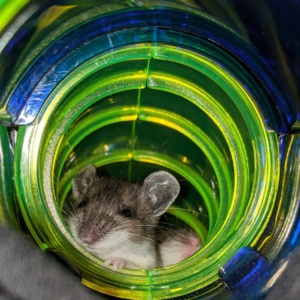 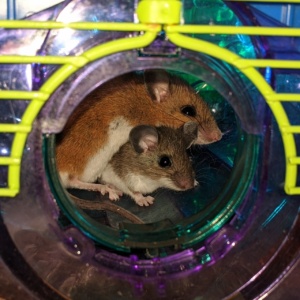 I planned to release all 6 once it got warmer out.

FROM FACEBOOK, 4/24/2020:  “Well, in mouse news, the Dad escaped.  One of the babies did too.  I had NO IDEA how fast and high mice can jump!  Rats don’t do that!  Thankfully a few hours later I found the baby huddled in a corner of the kitchen counter and now he’s back with his mom and 3 siblings.  PHEW!  I set humane traps out last night hoping to re-catch the dad who is in the walls somewhere.  Instead I caught JUNKYARD BRUISER MOUSE at the top of the basement stairs, who is going to enjoy a spa weekend with us and then be released next week.” 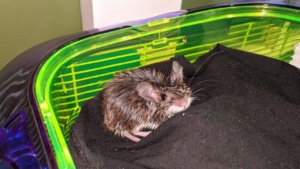 Junkyard Bruiser Mouse was such a mess, but adorable.  I only kept him for one night then released him.  I wish I’d kept him longer before releasing him, to give him more of a chance to recuperate from whatever made him look so hung over, but I was quite overwhelmed with mice at that point…

Meanwhile, the babies were growing up.  They stopped nursing and started eating the seeds and nuts I fed them [mouse food from the pet store]: 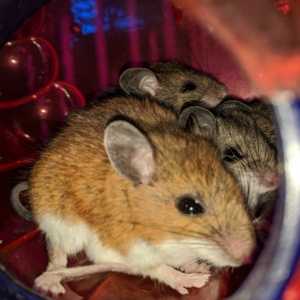 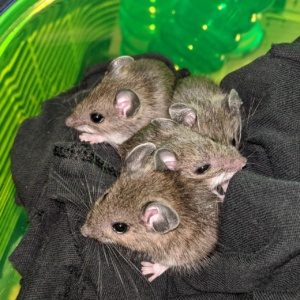 Mouse Mom usually draped herself over her sleeping pile of babies: 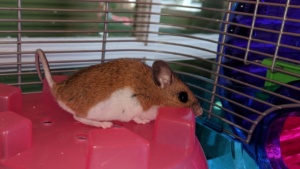 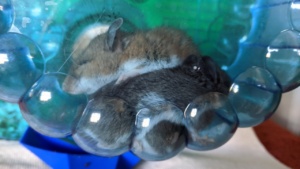 They lived in the living room in 2 cages connected by a tunnel until mid-May: 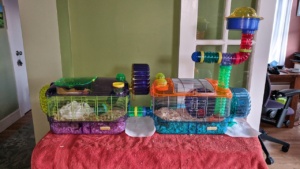 Part 2 involves 2 escapees, and a big release.  That sounds like a dirty movie…