This post addresses a very valuable “lesson learned”.  I was planning to lay more tile Tuesday afternoon, but I decided to first tidy up the mess on the tiles I’d already laid.  There were spots, glops, drops, & smears of thin-set mortar on all 23 of the tiles I’d laid earlier this week.  I’d been halfheartedly sponging off the mortar as I went, but new glops and drops would fall as I laid new tiles and I didn’t always clean them up.  I figured I could scrub them off later with a kitchen sponge.  Wrong!  Oh so wrong.  I learned very fast that dried thin-set mortar is akin to dried cement!  In fact, I think thin-set mortar IS cement. 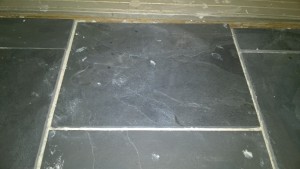 The thin-set instructions say to sponge off any mortar from the tops of the tiles immediately, or at least as soon as possible.  I was doing that at the beginning, but I was getting REALLY annoyed because after placing each tile, and positioning it perfectly, and adding the ¼” spacers, the tile would move out of place EVERY TIME I sponged it off.  And since I had thin-set on my hands, arms, shirt, shorts, legs, AND shoes, it inevitably would end up back on the tiles after I’d re-positioned them.  Here’s the same picture I posted at the end of my last post, but I’ve circled SOME of the dried mortar spots in red: 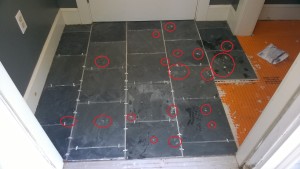 Ya, I didn’t really have any idea that dried thin-set is damn near impossible to get off.  I hastily did some internet research Tuesday about how to remove it from slate and/or natural stone.  I got really worried because some people said they’d had to rent floor buffers from their local home improvement store, while others bought sanding disc attachments for their drills and gently tried to buff the spots off without damaging or scratching the tile.  OMFG!  Thankfully I found an easier method to try first, and thankfully for me, it worked!!!*  It involves a mixture of 50/50 white vinegar and water, and an eye dropper: 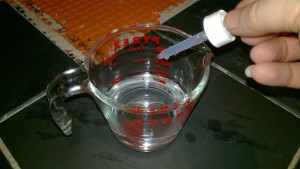 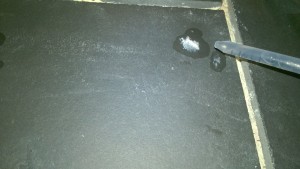 Drop the mixture on the spots, wait 5 minutes for it to start eating away at the mortar, then use a pot scrubber to gently scrub at the spot for 10 seconds until it’s gone: 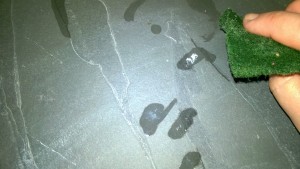 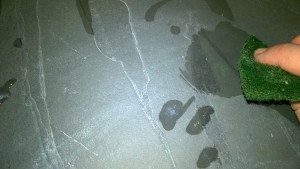 Follow with a few good scrubs with a gentle sponge and warm water, and the spots are GONE: 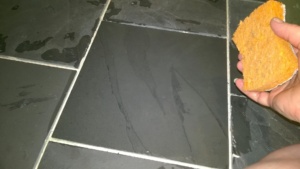 I found it took 2 go-arounds with the vinegar mixture before all traces of the mortar was removed from each tile, but who cares – it worked!  So Tuesday evening I worked away at 6 tiles: 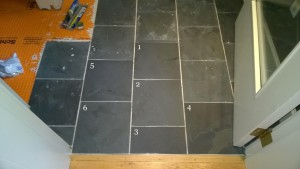 And last night I got 8 more done: 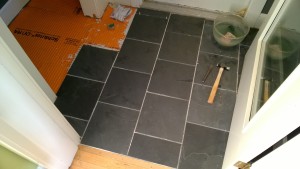 Now I just have the 4 on the right [under the hammer/chisel and bowl of water] and the row directly against the wall on the right.  So I’m almost done.  THEN I’ll start laying new tile [after thoroughly covering the clean ones with drop cloths!].

You might be wondering “why does she have her hammer/chisel out?”  Or not.  But I’m going to tell you anyways.  While I was scrubbing the tiles last night I noticed this: 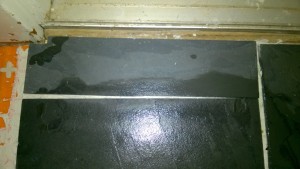 See how the right side of that long, skinny tile is touching it’s neighbor to the south?  It was the last tile I placed the other night and I was too tired to deal with it.  It wasn’t touching it’s neighbor the other night.  I swear.  So I used the hammer/chisel to gently pry it up.  The mortar was still very moist [probably because the humidity levels have been crazy this week], so I washed the tile, took it outside to the wet saw, cut it correctly, then re-laid it: 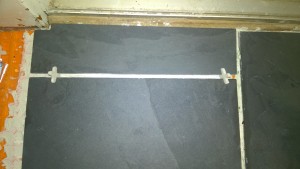 MUCH better!  Hopefully by the weekend I will have the remaining tiles cleaned of mortar and I can resume laying new tile.

* I think the vinegar mixture worked for me for potentially two reasons:  [1] the thin-set mortar is very fresh, only a couple of days old, and [2] it’s been really humid for the past week.  I have no idea if those actually contributed, or maybe the brand I bought reacts well to vinegar?  I’m just SO THANKFUL it worked!  Here’s what I’ve been using – I’ve gone through 2 gallons so far [including laying the underlayment]: 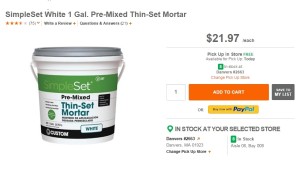