I have posted twice about our hard-wired fire alarms.  The first time was to admit I’d painted them [which you’re not supposed to do], and the second time was to share a story that led to me nailing numbers to the front of our house.  I realize now that I should have replaced them instead of painting them, but back then [2013] I was very new to DIY and knew nothing about wiring.  I also assumed either an alarm company or an expensive electrician were required to replace them, and that sounded like way more work than painting them.  I have since learned they should be replaced every 10 years and that replacing hard-wired alarms is almost as easy as replacing battery-operated ones!

So a few days before we flew to Hawaii [posts/pics coming soon] I came home from work and opened all the windows – it was the first real spring day we’d had, and it was SUPER windy.  I love hearing the wind howl through the house.  About 20 seconds later the earsplitting shrieks of our fire alarms filled the house.  SO.  F’ING.  LOUD.  The sound comes from 4 alarms and 3 wall speakers [which I also painted, but was careful to leave the speaker holes open, because responsible]: 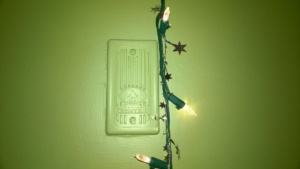 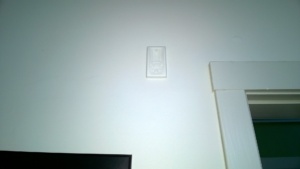 I raced around the house checking for any signs of smoke or fire.  Nothing.  Then I ran outside and listened at the door to the other 2 condos to see if their alarms were going off [they’re all connected], but they were quiet.  I’m not sure if that’s good or bad, I’m assuming if it was an actual fire the alarms in all 3 units would be going off, as they have in the past for kitchen smoke…  Then I grabbed the shared front door key to our house and checked the fire box in the front hall – no blinking lights.  Which means the fire house wasn’t alerted.  So I called the Fire Department’s non-emergency number, explained what was going on, and asked if they could come shut the alarms off.  Within 5 minutes four fire dudes showed up and spread out to check the house and basement.

They checked every room and finally determined it was the bedroom alarm causing the rucus.  Apparently each alarm displays a solid red light to indicate it was the one activated†.  Good to know!  They borrowed my Little Giant ladder and climbed up to detach the fire alarm from the bedroom wall.  Once it was detached, the other 3 shut off a few seconds later.  Yay!  Thankfully it was a slow fire day and one of the fire dudes was feeling extra chatty.  I learned SO MUCH about hard-wired fire alarms!  He showed me how each alarm has a little clip in back, making it easy to remove from the wall without touching any wires: 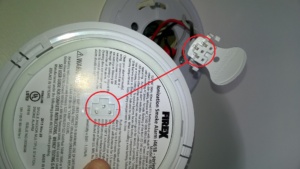 He said if it happens again, I can do this step myself, without having to call the Fire Department‡.  He also showed me the date on the back, which was 2003.  So it was high time to replace our 4 alarms.  He suggested taking an old one to Home Depot and asking for help finding a compatible replacement.  I took half that suggestion, since it was easy for me to find a replacement myself by comparing the old one to the array of new ones 🙂  He also told me that replacing hard-wired fire alarms is something most home owners can do themselves, provided they know a bit about wiring.  Yay!  No alarm company or expensive electrician required.  He told me he thinks dust buildup is what caused the bedroom alarm to go off.  Opening the windows triggered the alarm.  Kind of a scary thought, since we have a very clean house… I’m hoping he meant dust buildup inside the alarm!  He blew the dust out and clipped the alarm back to the wall.  He said it should be OK for another month or so, but to replace them sooner than later.

SIDE STORY:  After they left, I ran around the house trying to find the cats to reassure them that everything was OK.  Darwin was the first to emerge, and seemed pretty unfazed [typical].  I found Bonkers hiding under the dining room table [also typical].  But I couldn’t find Birdie anywhere.  I started to get really panicky after checking all her hidey spots and finding no sign of her.  I kept wondering if maybe she was down cellar or – god forbid – outside!  The firemen weren’t great about closing doors behind them.  I searched the cellar, I searched outside, in the garden, in the yard, under the cars, down on the river bank, in the neighbor’s yard.  No Birdie.  I finally went back inside and, after another 10 minutes of searching, found her jammed between the wall and the couch, obscured by a comforter.  She was wide-eyed and panicky.  After 10 minutes of patting her and reassuring her, she finally crept out, then jumped up onto the safety of her platforms.  Poor girl!  I think this was her first fire alarm!

Since then, I’ve photographed my brave girl twice on the living room ottoman, away from the protection of her platforms [!], so she’s obviously recovered nicely: 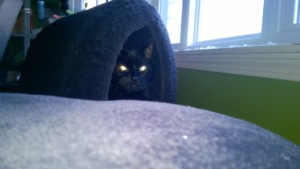 Then hubby and I headed off to 10 wonderful days in Hawaii.  We got home Wednesday 4/13 and I made a mental note to replace the fire alarms over the upcoming weekend [meaning last weekend].  However, last Friday morning, at the lovely hour of 4:04 AM, hubby and I were launched out of bed by the fire alarms shrieking again.  WTF!!!  Hubby raced around the house, basement, and outside, and told me it was just OUR alarms going off again [the alarms in the other 2 condos were quiet].  Meanwhile I’d determined it was the bedroom alarm again, since its red light was on [knowledge is good].  I set up the Little Giant ladder, hauled my tired ass up, and unclipped the alarm from the wall.  A few seconds later, blissful silence.  Gah!  We were so jet-lagged and sleepy.  But were very thankful we didn’t have to call the Fire Department!

Needless to say, I replaced the bedroom alarm this past weekend, and will replace the other 3 this coming weekend.  Home Depot sells a 4-pack of replacements, which works out perfectly since we have 4 fire alarms in our condo.  They came with little red “shower caps” which they recommend putting back on anytime you’re doing super dusty work – they’re kind of adorable: 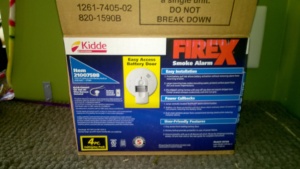 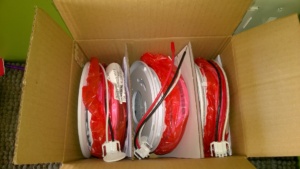 First step [as always]:  shut off power to the bedroom.  Thankfully I have previously mapped our breaker box & taped a cheat sheet to it: 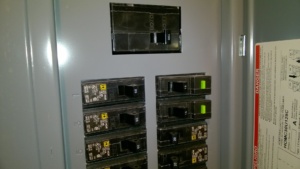 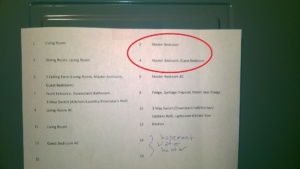 Next step was gathering the tools of the trade and climbing up to remove the old alarm’s wiring from the wall [my Little Giant ladder-top bag makes life so easy!]: 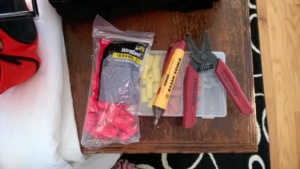 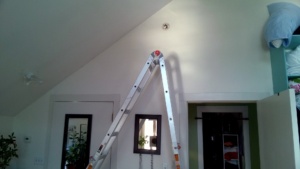 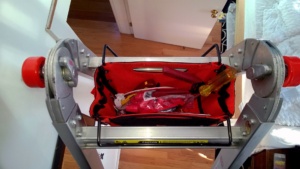 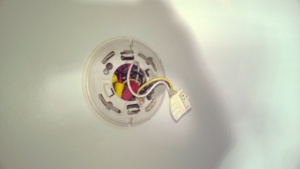 It took about 10 minutes to remove the old face-plate, pull the wires out, and detach the old white [neutral], black [hot], and yellow [action?§] wires & clip from the wall: 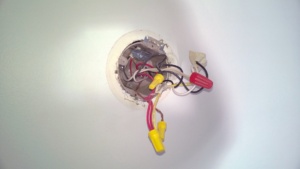 And to rewire it with the new white [neutral], black [hot], and red [action?§] wires & clip.  On the right is a closeup comparison of the old wires & clip vs. the new wires & clip – slightly different: 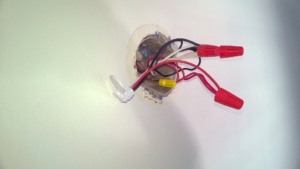 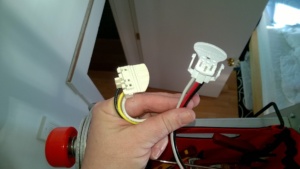 Then I screwed the new face-plate on, twisted the new alarm onto the face-plate, activated the backup battery, and tested it: 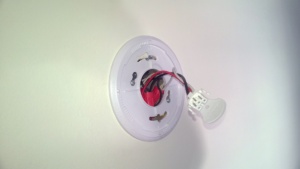 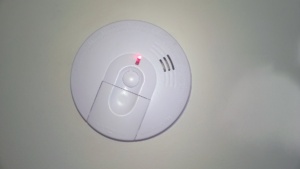 DONE!  The red light blinks every 30 seconds, and there’s a solid green light which you can’t see except in the dark.  I’m assuming the red light will remain solid if the alarm is activated.  It’s not perfectly perpendicular, but hopefully that doesn’t matter.  I used the old face-plate’s screw holes instead of drilling new ones…

† In early 2014, when the fire dudes had to come for a similar situation, it was the Girl Cave alarm displaying the solid red light.  However, the firemen were NOT chatty that day, and I learned nothing except not to paint your fire alarms.

‡ Although obviously, if the alarms in all 3 condos are shrieking, a visit from the Fire Department is a must!

§ I have since learned that the yellow/red wires are not “action” wires, they indicate the alarm is linked to other alarms on the same circuit.  But I still prefer to think of them as ACTION! wires.