A few months ago I came home from work to find the building-wide fire alarm blaring.  It’s L·O·U·D and comes out of multiple speakers throughout the condo.  There’s no way to shut it off without calling the Fire Department.  Apparently the alarm was tripped by work being done in the 3rd condo.  And no one was home, so who knows how long it was going off – poor cats!  It’s supposed to automatically alert the fire house, which it didn’t, so the 3rd condo owner was going to take up with the Fire Marshall.  I called the Fire Department’s non-emergency line, and a few minutes later they arrived.  After shutting it off, they did a sweep through the house and basement to make sure there was no actual smoke or fire.  At one point they yelled for me to come upstairs to the Girl Cave… and scolded me for painting the fire alarm [ooops…].

They also said they’d had trouble finding the house, and if I wasn’t standing outside waving them down, they’d have driven by.  I’d given them street address #63 [which is our condo’s address], but the only number on the front of the house is #59 [the 3rd condo’s street address].  Even though all 3 condos are in the same house, we have 3 separate entrances and 3 separate street addresses.  According to the Fire Department, houses like ours need to have all the numbers displayed on the front so emergency services can find us fast.  Makes perfect sense!

So yesterday I bought some house numbers and nailed them to the front corner of the house: 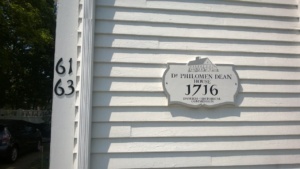 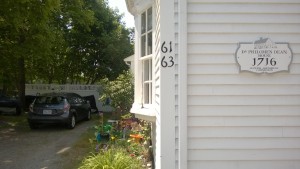 Here’s a shot of the front of the house I took early this morning, with the sun just coming up on it – you can see the 3rd condo’s door on the right side and my new house numbers on the far left [I know, they’re hard to see, but I was standing across the street!]: 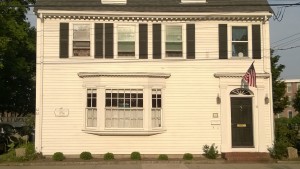 And here’s the view of our door and neighbor Kathy’s door, on the left side of the house: 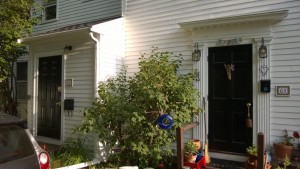 And our crumbling front steps, which are getting replaced with wooden stairs after the deck is built – another project I could DIY, but since the crew building the deck offered to throw together some new wooden steps, I said “sure!”  And in the 2nd pic you can see my poor little collection of potted plants which used to be out back in the yard but are currently stashed to the left of our door due to the deck work having just begun in the yard. They won’t be getting much sun, so hopefully the deck won’t take too long! 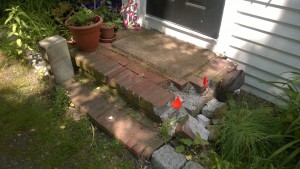 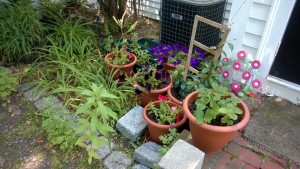 Our new front stoop was completed in August 2014: 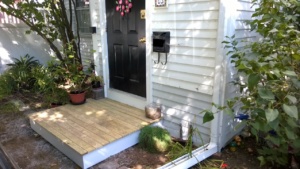