Back in January, I started painting the small bookcase in the girl cave Benjamin Moore’s Galaxy, same as the ceiling.  I thought it would look really nice, and it did!  Here’s a before and 2 afters: 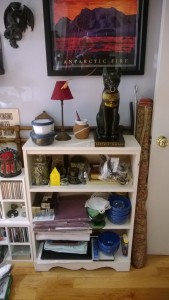 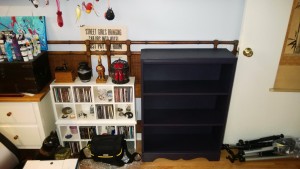 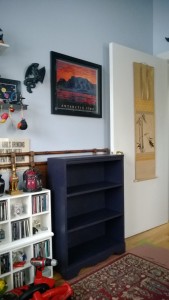 On Tuesday I learned I made the ever popular DIY mistake of painting latex over oil [my parents gave me the bookcase recently, but I had no idea they’d painted it with oil like 40 years ago – GAH!].  It’s one of those mistakes that almost every DIY’er makes once, but isn’t likely to repeat.  It could have been a lot worse.  I’ve read a few accounts online of people painting 10 doors in their house only to realize they had just painted latex over oil.  Or people that painted all the baseboards in their new [antique] house only to discover they were originally done with oil.  Nightmare!  Latex over oil always requires a redo, since the latex will start peeling off in sheets.  So I guess I’m thankful my blunder only involved a small bookcase.

Yesterday I was home all day [snow day – woohoo!], so I figured I’d be productive and start sanding down the bookcase.  At first I used really fine grain paper, but it did nothing, so I upgraded to much coarser paper.  After about an hour I got both sides and the top sanded [and took a dust-covered selfie]: 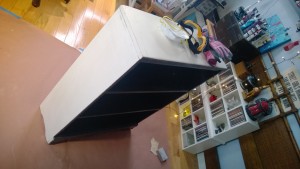 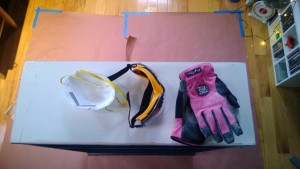 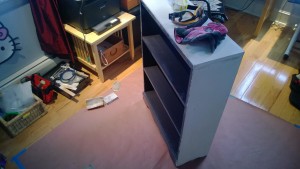 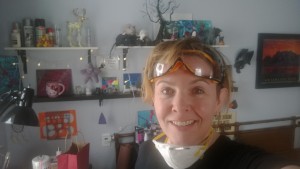 It took another half hour to sand down the front: 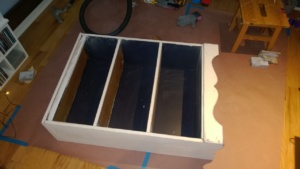 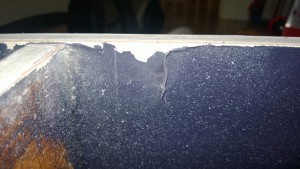 You can see how the purple latex paint sort of sheers away from the white oil paint layer.  Bleh.  After that, I went outside and shoveled for half an hour, then came back inside and crashed on the couch with hot apple cider and HGTV [snow days always require at least some relaxing!]

Remind me next Christmas to ask Santa for a palm sander…

My parents ended up taking this bookcase back into their possession.  Before they came I sanded the rest of the purple off with my awesomely handy orbital palm sander: 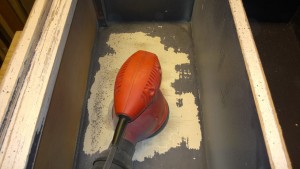 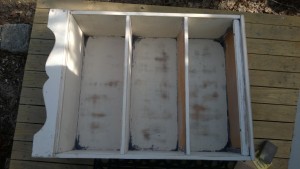