We have [*cough* UGLY *woof*] recessed lighting throughout our condo. It’s very 1980’s: 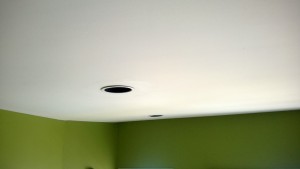 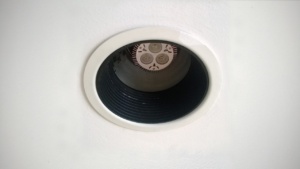 They look like putting green holes to me. Like I should be standing on the ceiling hitting golf balls towards them. They’re also reminiscent of “whack-a-mole” [although having moles popping out at random intervals, singing happy mole songs to me, would be AWESOME! *daydream*]… Moving on. Last year Jim replaced the regular bulbs with LED ones, which was an improvement, but they’re still ugly. Last week I decided to investigate replacing the “trim” [the part that you can easily pop off and remove from the ceiling while still leaving the housing in place], so I popped one off to see what I was dealing with: 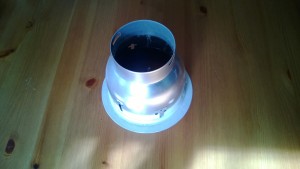 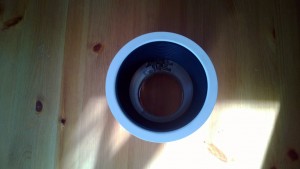 Here’s a diagram of our actual housing and trim model: 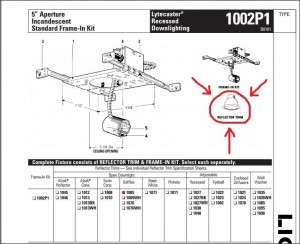 And here’s what the ceiling hole looks like after you pop off the trim: 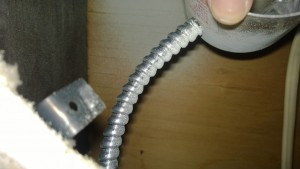 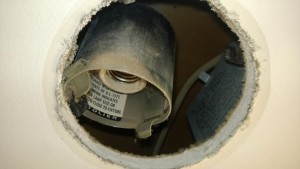 The housing is attached to the ceiling joists [you can’t actually see it in the photos], and has a long flexible arm you can move around with a socket piece at the end. The trim clips onto either side of the socket piece. From reading the labels stuck on various parts of the housing and socket I deduced we have Lightolier 5″ Non-Insulated Ceiling Recessed Lighting style 1002P1. And the trim style is called Baffle, which is apparently the most popular for living spaces [which baffles me, but hey]. Black baffle [which is what we have] “reduces the amount of glare from the bulb”, whereas white baffle “helps reduce the appearance of holes in the ceiling” [go figure]. After researching different styles of recessed lighting trim on Saturday [via the Google], I decided Gimbal style would look awesome: 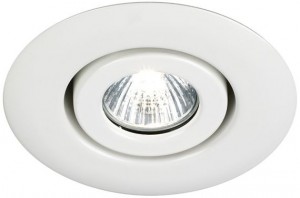 It would make the lights flush with the ceiling [no more recessed holes], and Gimbal style allows you to tilt the light in different directions to highlight certain parts of your room. So we went to Home Depot, with the existing trim in tow, hoping to upgrade to Gimbal style. The guy immediately said “that’s Lightolier trim – you can only replace it with other Lightolier trim, and we don’t carry that – you’ll probably have to go straight to the manufacturer”. Bleh!!! So after consulting our phones to see if Lowe’s sells Lightolier [they don’t], we went back home to regroup. After looking feverishly through the Lightolier website, I realized they don’t offer anything less ugly than what we already have.

Soooo… looks like I’ll be spray painting the baffle trim white! Which is the only option other than ripping down the ceiling and replacing all the housings with Gimbal style, which is not going to happen!