As I was researching basement flooding, one article said “make sure your gutters are all aimed away from your foundation – often this can be the cause of your basement flooding”.  Lo and behold, when I got home from work today, I realized that the gutter directly over the leak was pointed straight at the foundation – d’oh! 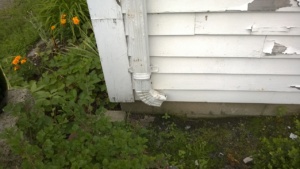 The water had made a divot in the dirt: 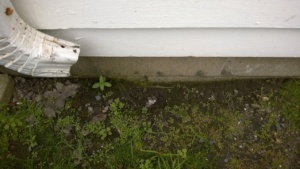 I checked the gutter on the right front of our house and it’s pointing away: 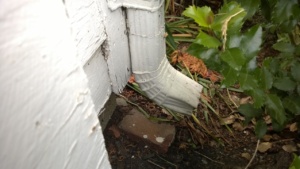 As is the one on the back right – it’s pointed out towards the River, over the wall: 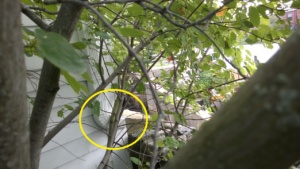 And the one on the back left is the one that drains under the catio, and I made sure to pull the catio a bit further from the house when I gave it a makeover last month so the gutter extender wouldn’t keep falling off.  Now it drains properly into the gravel under the catio: 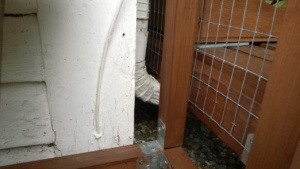 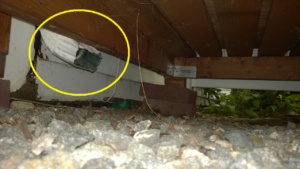 I didn’t want to be inside after work, because I’m still really sad about Franc dying [if you didn’t see my Facebook post, he died suddenly last night, which SUCKS 🙁 ].  So I decided to create a gutter hack to direct water away from our foundation.  I remembered we had a plastic gutter extender in our back yard, under the Adirondack chair.  I grabbed it and after wrenching off the original base, I replaced it with the extender: 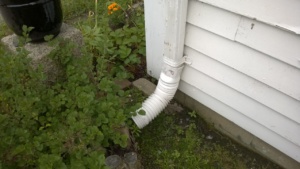 Then I went down to the basement and hunted in all the dark corners for something to use to extend the extender.  I found an old piece of plastic gutter, so I used my hacksaw to cut off a length that seemed appropriate for my gutter hack: 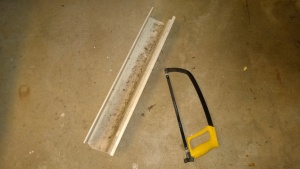 I brought it outside and had to chop a few branches from the nearby bush to get it to lay straight, and tucked the end of the gutter extender into it.  Now the water will be directed towards the sidewalk instead of down into our foundation: 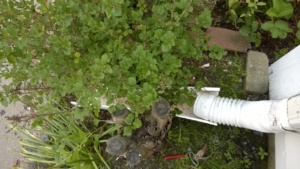 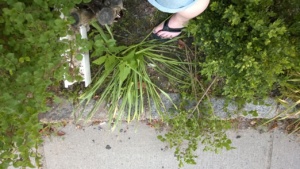 I think it will REALLY help with our basement flooding, potentially even taking care of it: 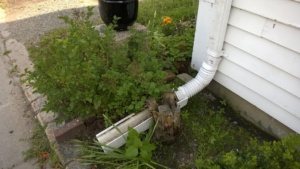 Woohoo!  Meanwhile, our cage still has a puddle in it from the storm 3 days ago…: 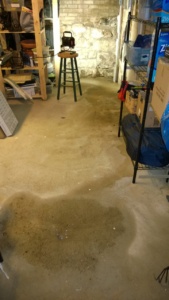 It’s been raining for the past hour and the basement is completely DRY!!!  The gutter extender has a little river of water running from the gutter to the sidewalk outside our house.  It’s working!!!

This post is dedicated to Franc, one of the best rats I and we have ever had.  We loved you SO much buddy and we miss you fiercely: 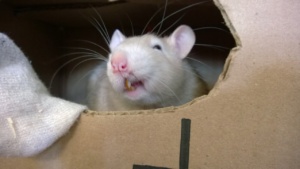 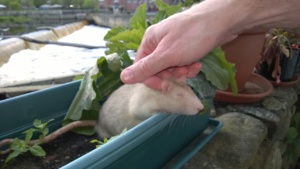 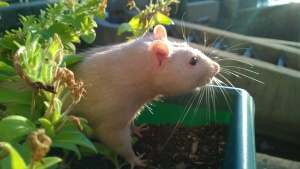 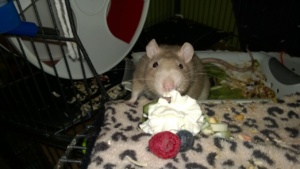 Here’s what happened, as posted on Facebook last night: 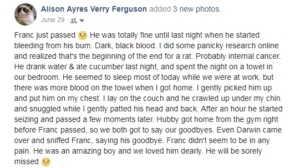 We adopted him in December 2015, and at that point he was between 6 months and a year.  We had him for a year & a half, and it feels like we only had him for a few days.  The time went way too fast 🙁