Or “How I broke our garbage disposal the same exact way I broke it 5 months ago” SIGH.  And once again it was hubby who came to the rescue!

5 months ago I got a big, fat fish tank rock lodged in the gears of the disposal.  Thankfully hubby got it out and we didn’t have to replace the disposal.  Last night I stopped at Petco after work and bought a new fish tank [the old one is totally algae infested no matter how many times I clean it or treat it].  I set the new one up on the counter next to the old one so it can cycle for a few days before transferring the fish.  Old on the left, new [smaller & cuter] on the right: 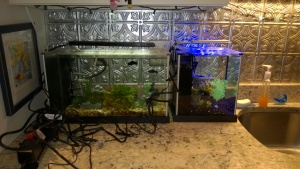 In addition to the tank kit, I also bought new tank rocks, new tank decorations, & a new heater.  I decided to rinse the new tank rocks in a colander in the sink before putting them in the tank to get rid of any dust.  Dumbass.  The new rocks are tiny and they slid right out of the colander, under the edge of our drain screen, & down into the disposal: 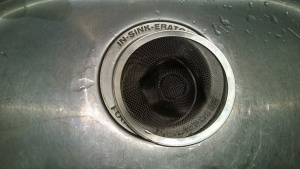 I thought maybe they were so small the disposal would just chew them up…  I turned it on and there was a loud rattling followed by a “thunk” as the gears seized up.  Yay.  I couldn’t deal with it last night so I just left it and went to bed.  Work has been really hard this week [in a good, using-my-brain kind of way] so my capacity to handle anything else is quite diminished.  This morning hubby said “did you just give up and let all the rocks go down the drain?” and I laughed and said “no!” and he said “I looked with a flash light and there’s TONS of them down there”.  HA!

I was pretty despondent about the whole thing and figured I’d be replacing the disposal this weekend.  But hubby suggested after work we should use the shop-vac and try to suck the rocks out.  Brilliant!  I took a pic of the model number so I could read up on troubleshooting: 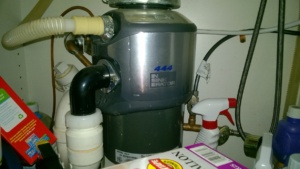 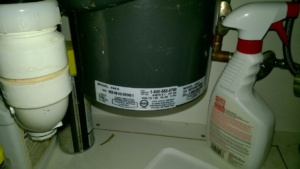 After googling “Insinkerator 444-5 jam” I came across this awesome youtube video explaining that there’s a hole for an Allen wrench in the bottom of our [all] disposal, allowing you to manually “force” the gears forward, which will often clear a jam.  Here’s a pic I took of the bottom of our disposal showing the Allen wrench hole in the center & the red “reset” button you press afterwards: 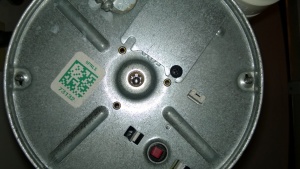 After work I noticed there was standing water in the drain, so I grabbed the shop-vac and removed the guts, since I didn’t want to get the bag or filter wet.  Darwin did a full inspection of course: 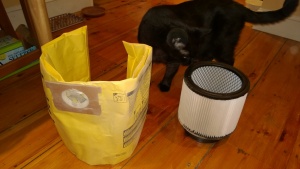 Then I stuck the nozzle down the drain and sucked up a ton of rocks!  Woah.  I tentatively turned on the disposal when I was done and… it worked!  Holy cow!!!  I didn’t need to use the Allen wrench trick or anything PHEW.  Then I promptly tripped & knocked the shop-vac over.  The top flew off and dumped the nasty drain water all over the kitchen floor and rug.  Awesome.  After cleaning that up, I dumped the rocks out onto the counter to see how many had been down there: 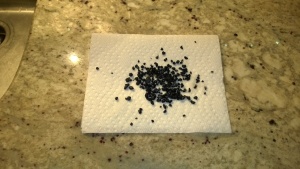 I learned on the YouTube video that you can clean/refresh your disposal with ice cubes & baking soda, so I dumped a ton down and let it go: 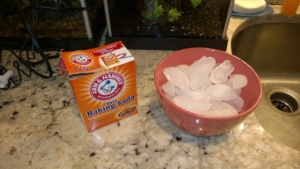 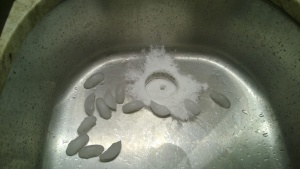 It works perfectly!  So glad/thankful I didn’t break it!  I’m NEVER putting fish tank rocks in the sink again.  Ever.

Then I moved the snail into the new tank to give him a head start: 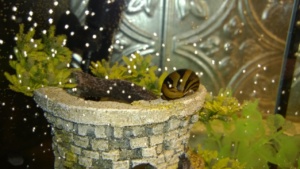 The sparkles/dots are air bubbles which are currently coating every interior surface of the new tank.  It’s very pretty!