Everyone has a day now and then that just goes wrong every which way, for no apparent reason.  I always assume when I have a day like this that someone’s bad karma has gotten too close to me and rubbed off a little.  My therapist says that’s impossible, but I don’t think so.  Anyway, I woke up at 2 this morning because the otters were chirping, which made me smile.  I woke up at 3 because it sounded like something was being eviscerated in the River bed.  I’m guessing it was probably raccoon’s mating, but I have no idea, and wasn’t about to go out in the dark to find out.  I woke up at 7 to Bonker’s howling for his breakfast, and decided to just get up because I had a lot to do today.

One thing on my to do list was to try and finish the last panel that needed silver paint.  I sat down at my art desk in the girl cave, got the canvas ready, grabbed the bottle of liquid silver leaf and gave it a good shake.  I unscrewed the cap but then realized the sun was right in my eyes.  I screwed the cap back on, stood up and closed the velvet blackout curtains.  I sat back down, grabbed the silver leaf paint and re-shook it.  And realized in the worst way possible that I didn’t secure the cap properly: 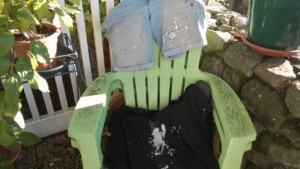 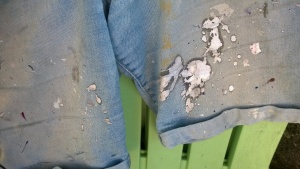 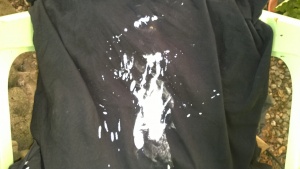 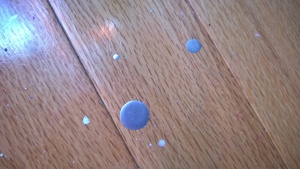 It got all over my clothes, the floor, my desk, and worst of all, my panel.  I raced downstairs and doused my panel in the sink.  I used a scrub brush to try to remove as much silver as I could, but I think it’s a lost cause: 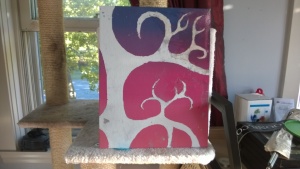 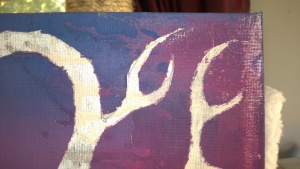 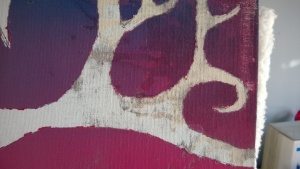 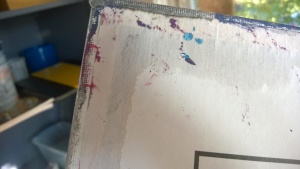 The last picture shows how water logged the canvas board is, it soaked all the way through to the back.  scream! Hubby made me pull my shorts and t-shirt off because I was covered in super strong smelling liquid leaf, which soaked through my clothes onto my skin.  Then he made me take a shower to try to wash off what I could.  Soap did nothing, so I asked him for the nail polish remover.  After dousing my stomach, thighs, and hands with it, I finally got the majority of the silver off my skin.  Dammit… I had to put my clothes in the yard to dry because they smell so strong.

So yeah, it has been one of those days where I should have stayed in bed.  I will probably have to go to the art store, buy another 11×14″ canvas board panel, and redo the panel.  Sucks.  But it could have been worse.  It could always be worse, so I’ll just be thankful none of the pets were injured, it didn’t get in my eyes or face, and worst case scenario I set myself back a few days.

I also managed to break our garbage disposal.  I cleaned the fish tank which was overcome by brown algae.  Again.  Gross.  So I removed the fish, removed the 2 tank decorations, removed the snail, and spent almost 2 hours meticulously cleaning the tank, the rocks, the filter, and the decorations with bleachy water.  I rinsed the rocks in the sink and let them soak for an hour, then did a few rinses to make sure the bleach was removed.  I was very careful not to let any rocks slip down into the garbage disposal.  Once the sink was clear and the rocks were back in the tank and the tank was full of clean water, I tested the garbage disposal and just heard a low level hum.  No chomping.  No grinding.  %$@#!!!

Hubby was about to leave for his run, but thankfully came to the rescue instead.  He unplugged the disposal from the wall, and I stuck my hand down and pulled out EIGHT small fish tank rocks.  WTF?  I plugged the disposal back in and tried turning it on and it still did nothing.  Just a low level hum.  By this point I was in full panic mode:  “do we have a plumber?  Should we call him?  Should we go to Home Depot and just buy a new one?  Should I try to install it myself?  I hate plumbing but theoretically I can do it… No, better to call a plumber… OMFG what are we going to do???!!!”  Meanwhile, hubby looked in with the flashlight and noticed a small fish tank rock was wedged in one of the holes where water drains out, but it was preventing the blades from turning.  He unplugged the disposal again, tried to grab the rock with tweezers, then with his hand, then with a screwdriver, but it was wedged so tight he couldn’t get it out.  He worked at it for about 20 minutes.  I finally suggested a hammer and an awl.  I said “just bash the fu@k out of it!”  He didn’t want to in case the pieces rained down into the motor and made everything worse, but as a last resort he bashed it and blew the rock into pieces and now the disposal works just fine!  Thank you HUBBY, you are my hero!!!

3 of the 4 fish didn’t make it. Apparently the thorough tank cleaning was too much for them 🙁 GUILT

I’ll close this post with a picture of Darwin sleeping in the cat carrier [Bonkers had a small tumor removed the other day and the carrier is still on the kitchen floor, waiting to go the basement] and Bonkers chillaxing on some packing paper, which loves almost as much as plastic: 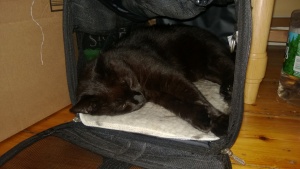 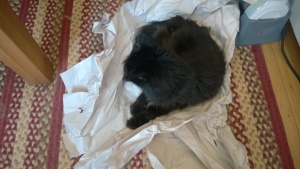