Tuesday after work hubby and I were in the living room and he was looking out the window at the River and suddenly said “hey, what’s that?  There’s something small swimming – I think it’s a beaver, but a really small one!” so we both went outside on the fish ladder walkway for a closer look: 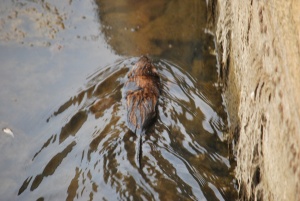 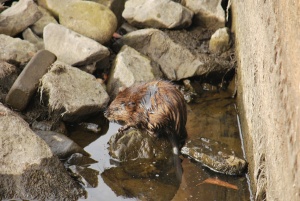 It was indeed a wee little baby beaver, about the size of a guinea pig – so cute!!!: 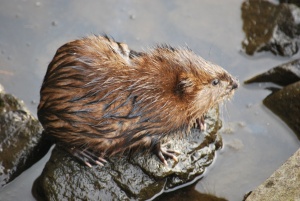 He was swimming back and forth along the base of the dry dam [because drought] and kept looking up like he wanted to be in the fresh water above the dam.  He even tried to climb a plant frond growing over the dam, but he kept sliding off.  Poor little guy!  So I came back in and went down to my basement workshop, found some scrap wood that would work as a wee little ladder for the wee beaver, cut some cross boards, and nailed everything together.  When I walked upstairs with it, hubby just stared, then laughed, then said “yep, I should have known what you were doing down there”: 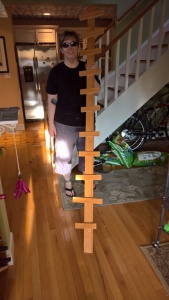 I wrote our name and address on the back in case it gets lost.  Maybe someone will return it… 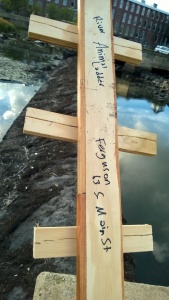 I carried it out to the top of the dam, and didn’t realize hubby was taking pics of me – I love how the sky looks reflected in the River – it’s like I’m floating in the clouds: 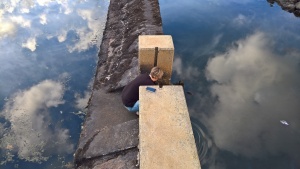 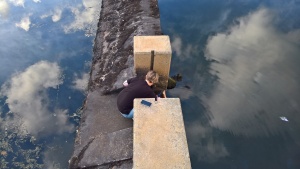 Hubby helped me pick a good spot for it where it was least likely to blow over.  It’s set up in the break in the cement wall to the left of the dam: 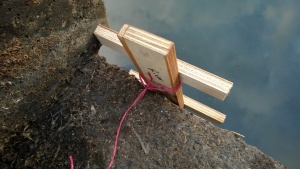 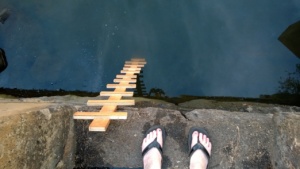 Thankfully the area we chose has deep grooves in the cement which are used by the Ipswich River Watershed Assoc. to close off the flow of the River [using boards] during the months when fish are migrating up the fish ladder [this area is directly above the entrance to the fish ladder].  I remembered we had some very odd pacman-shaped weights in our backyard [neither hubby nor I know where they came from].  They fit perfectly into the groove: 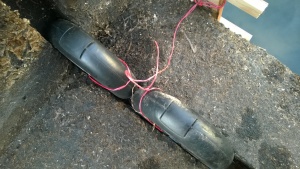 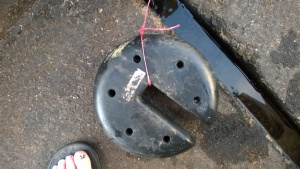 I tied the weights to the critter ladder with some red twine.  Hopefully that will hold the ladder in place and allow animals and snakes to get up to the fresh water, at least until the waterfall comes back and the fish ladder is reopened.  Here’s a pic of me hubby took from the living room window, and another view of the weights wedged in the groove: 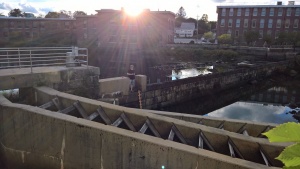 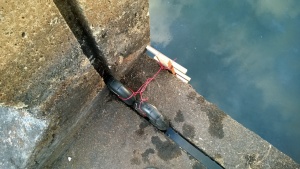 When I was done, I climbed down onto the fish ladder to see how the critter ladder looked: 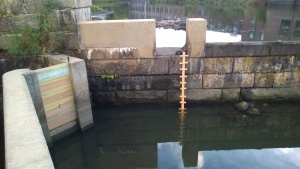 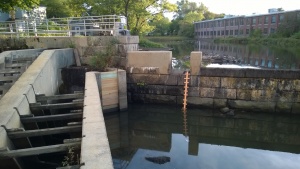 So far we haven’t seen anything using it, but I’m hopeful!  I’m not sure the baby beaver is able to climb up something like that, so hopefully his parents guided him upriver using the sewer system.  Here’s 2 pics I took today of the critter ladder at near high tide.  I took the 2nd pic from our deck: 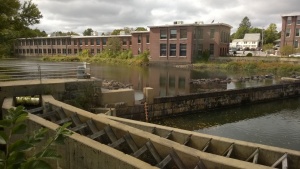 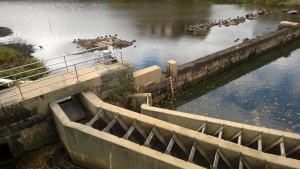 I would love to see the water snake using it!