Last week I primed the living room cupboard base and doors with Stix primer.  However, after two coats, I noticed the doors were showing streaks of yellow through the primer: 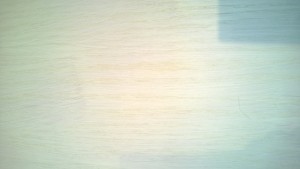 Which made me worried that the stain was coming through.  So, since my motto is “when in doubt, BIN”, I re-primed the cupboard and doors with 2 coats of Zinsser BIN.  No more yellow streaks – BIN FTW!  With 4 coats of primer between me and the stain, I should be all set to paint! 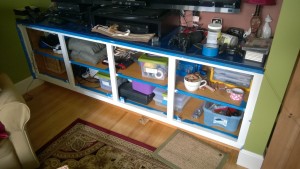 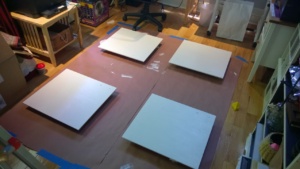 Earlier today, while the 2nd coat of BIN was drying [even though I swear that stuff dries in 5 minutes], I took the hinges and screws outside for some spray paint action.  They were originally brass colored and now they’re shiny metallic [Rustoleum “Metallic” to be exact].  I pushed the screws through a cardboard box so I could paint just the heads: 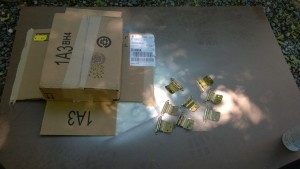 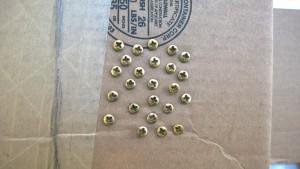 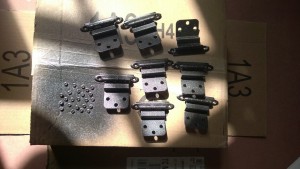 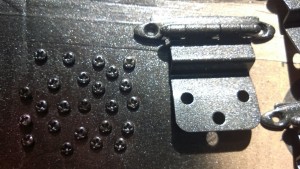 I’m hoping to put the first coat of actual paint on the cupboard tomorrow after work, and the 2nd coat Tuesday after work.  Then I’ll let everything set for a week or two, put the doors back on, and I’ll be done!  Although I *might* paint the insides of the cupboard Calypso Orange [like the kitchen cupboard] at some point in the future… I haven’t decided yet.

I also completed a small side project while I had the STIX primer out last week:  I painted the sides of the 2 shelves in the laundry room.  No one would have ever noticed they were unpainted, but *I* noticed, and they were bugging me!  The shelves are just basic particleboard crap from one of the big box stores.  The top, bottom and front of the shelves came white, but the sides were left unfinished.  The laundry room got such a nice overhaul a few months ago that the sides were an eyesore every time I walked by the room.  Not anymore! 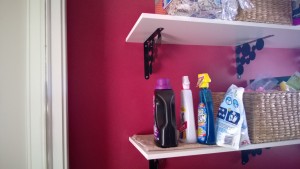 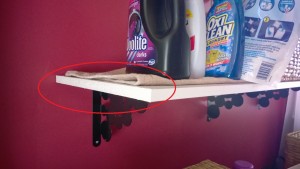