To be fair, this was my first attempt using caulk where the results have to look “nice”.  I caulked the storm windows a few years ago [and made a mess], and caulked a few seams in the basement cage last month [and made a mess].  But last weekend I tried to caulk the kitchen counters and… made a mess.

One of the “easy” items on my 2017 Projects list is to caulk the kitchen counters.  I’m not sure they were ever caulked.  It’s been on my list for YEARS.  I decided to try caulking them last weekend.  I had a tube of clear DAP kitchen & bath caulk which I’d never used, which I bought last year just for this purpose: 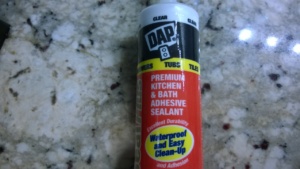 I learned on other DIY blogs that you get a very neat & even caulk line if you use painters tape first.  I moved everything away from the kitchen backsplash, washed it thoroughly, and used frog tape to mark my first area: 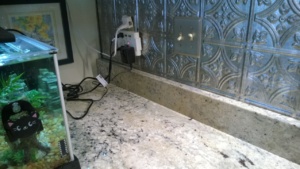 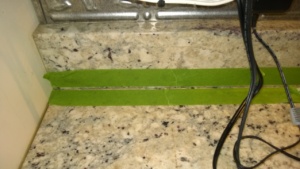 Then squirted my first line of caulk, which was WAY too much, and I made a total mess when using my finger to spread it along the line [you can see some got up onto the marble above the tape]: 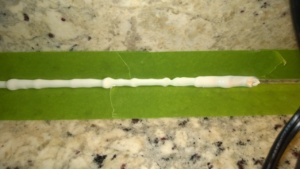 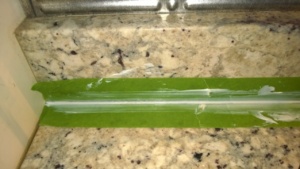 I decided the easiest way to do the caulking was to go section by section, using small lines of caulk instead of one long line.  I would tape the area, caulk it, smooth it out with a finger tip, then carefully remove the tape: 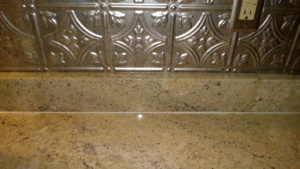 I was left with very even lines of caulk which dried very fast.  It goes on white and dries to clear.  By the next morning it was totally clear.  You can only tell it’s there because it’s shiny 🙂

After finishing the lower section of backsplash, I decided to move up to the upper section which borders the faux-tin backsplash.  I followed the same process: 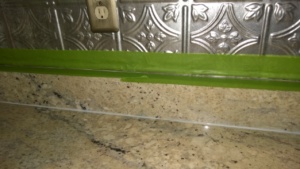 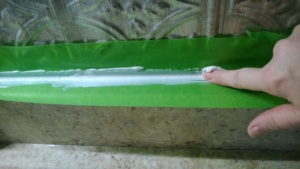 But because this was a thicker line, and involved a textured background, I decided to leave the tape on overnight and then fill in any air holes that might have formed during the drying process.  Seemed logical at the time.  I wrapped the tip of the caulk in plastic wrap and clipped it: 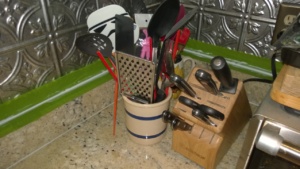 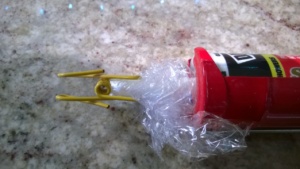 But that was a dumbass mistake.  I wasn’t thinking that the caulk would adhere as much to the tape as it did to the backsplash and wall… The lines actually looked really good the next morning so when I went to tear off the tape, half the caulk came with it *FACE PALM*.  So… it’s back to ground zero for the upper line.

Yesterday afternoon I used tweezers to pry some of the remaining caulk out.  It came out in tiny shards: 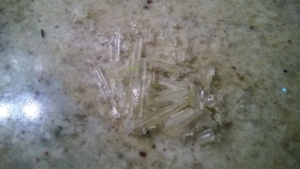 It.  Took.  Forever.  Then I taped off the upper portion of the backsplash again and re-caulked it.  After smoothing it out with my finger I immediately remove the tape: 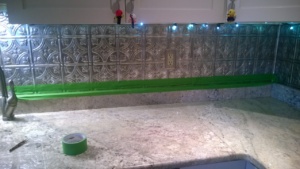 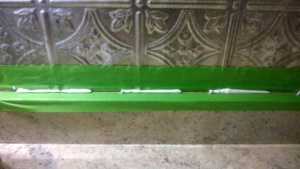 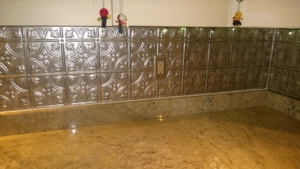 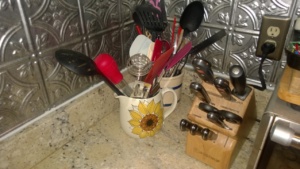 By this afternoon it was dry & clear: 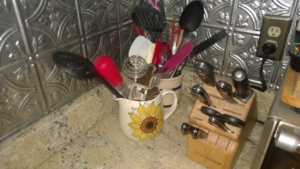 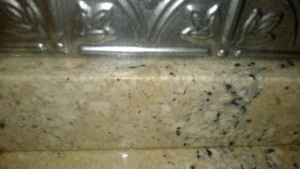 Now I just have to redo the other side of the counters and I’ll be done!