Once the chicken wire was off the catio frame, I realized I could build a little sleeping box for the catio before my welded wire arrived.  I did a quick sketch and took some measurements.  I wanted the roof of the box to slant slightly so water wouldn’t collect on it, which is exaggerated in my sketch: 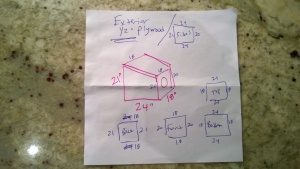 I consulted my Dad and he suggested ½” exterior plywood.  I went to Home Depot after work last Tuesday and bought a half sheet cut into 2’x2′ squares.  After getting home I realized I’d made a measuring mistake – I’d sat on the bottom shelf of the catio, leaned in, and measured the interior distance between catio shelves, which is 21.5″.  I should have measured shelf to frame, which is only 18″ – d’oh!  It was only after cutting a side piece to 21″ and testing it against the catio I realized my mistake.  Phew – glad I didn’t build the whole box.  Measuring wood is not a strong point of mine!  I modified my sketch with the new measurements: 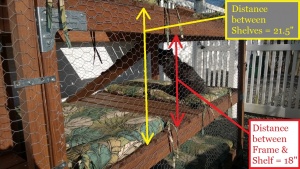 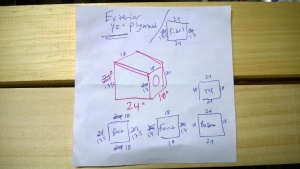 You may also notice I didn’t account for the ½” thickness of the wood.  I had a hard enough time visualizing the size of each piece let alone which ones needed to be slightly shorter – gah!  I figured I’d deal with that while building.  Spacial visualization is beyond my scope of talents, FOR SURE.  Once everything was cut to the right size, I sanded down each edge & surface: 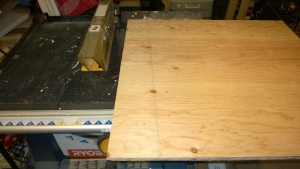 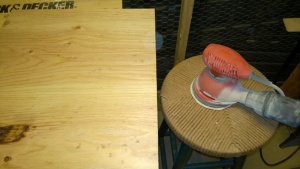 On Wednesday I was home sick with a migraine, so nothing got done.  That was über frustrating, but what can you do.  On Thursday after work I stained the 6 pieces: 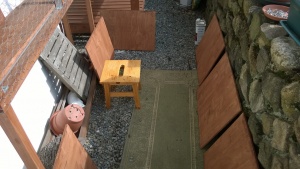 And on Friday I built the box: 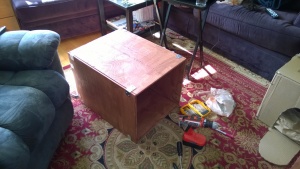 I attached 5 of the 6 pieces together with strong-tie brackets and screws.  I left the front piece off so I could cut an entrance hole.  I knew I wanted a cat-head-shaped entrance hole, and was planning to buy a cheap sabre saw/jigsaw for this step, but my Dad surprised me 2 weekends ago with one of his old ones.  He had two, so he gave me the best one – so nice!!!  Thank you, Dad!  I LOVE it:

I Googled “cat head outline” and found one I really liked [my original link to the original isn’t working anymore so I removed it]: 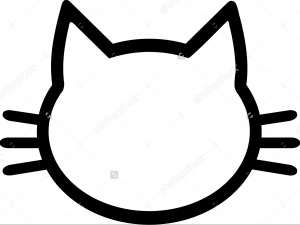 I printed it out but it was too small for a cat to fit through.  So I opened it in MS Paint, cut it in half, saved each half as a new file, and then rotated the halves so when I printed them I could tape them together into one piece: 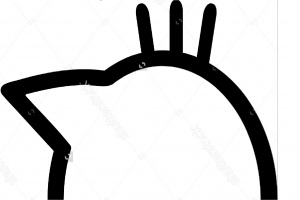 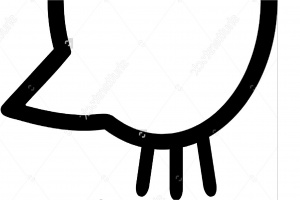 When I laid it across the front panel of the sleeping box it was perfect!: 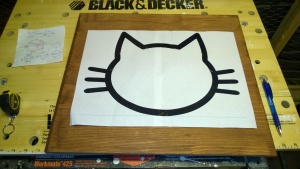 I used a pen to trace the outline of the cat head, pushing down really hard so I’d be able to see the indent on the wood.  Then I traced the indent in pen on the wood, but decided it would be easier to cut if the outline was in Sharpie: 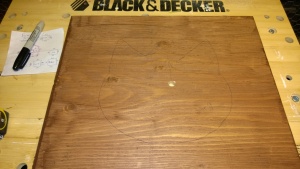 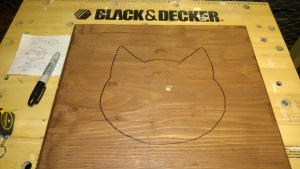 That spot in the middle is the hole I drilled to use as a starting point for the sabre saw blade.  I debated using the sabre saw on a test piece of plywood, since I’ve never used one, but after watching some YouTube videos it looked so easy I decided to just go for it.  I clamped the wood to my Black & Decker WorkMate, then got to cutting – the ears went really well: 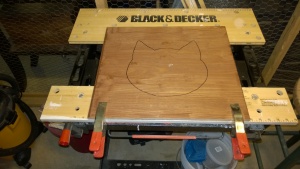 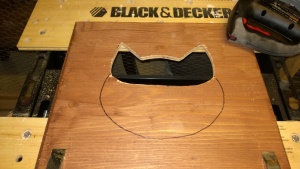 Although I cut a slice into my WorkMate table… Then I flipped the wood around and cut the rest of the cat head: 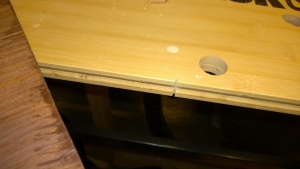 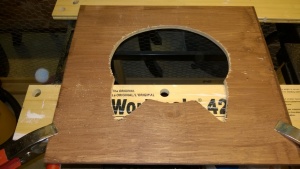 It only took a few minutes – it was so easy!  Then I sanded the edges, brought the piece upstairs, and bolted it to the front of the sleeping box: 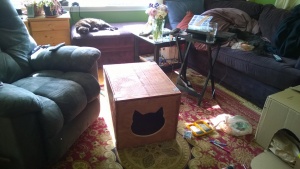 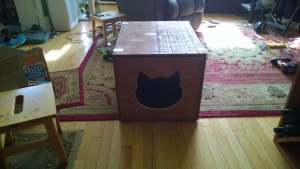 I LOVE it!  I took the completed box out to the catio to make sure it fit, and it fit perfectly!  But you’ll have to wait until the next post to see it 🙂

Join 21 other subscribers
← Backyard Catio – Part 22 ← I Painted Franc at a Paintbar!