You know those little projects on the perpetual “to do” list that never seem to get done?  Because they’re small, annoying, or both?  Yeah.  I have 10 of those that have been on my list for months.  I decided I’ll do one a day for the next 10 days.  I figure each one will take between 30 & 60 minutes.  Originally I planned to post this all in one post, but it got too long, so I’m breaking it in half.

On Monday [Halloween] I fixed the base of the IKEA Onsjö light in the girl cave so it’s flush with the ceiling [or close enough]: 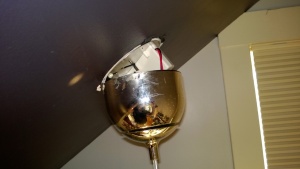 Ever since I installed it it’s been driving me crazy.  In theory the [cheap plastic] base is supposed to be pulled tight to the ceiling by the weight of the light.  That’s bullshit.  Today I did the best I could, and I’m calling it good enough.  I think because it’s on a slanted ceiling it will never be completely flush.  Total time to fix = 10 minutes, which included scraping off the Sugru adhesive I’d used when originally installing it.

I finally gave up and removed the Onsjö “firefly” LED chandelier from the girl cave ceiling.  It never sat well on the ceiling, and even though it was cool looking, it gave off very minimal light.  I’m going to replace it with a spot light soon.  I need as much light as possible when I work on art and stained glass!  All gone: 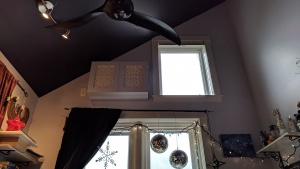 On Tuesday I installed a door sweep at the bottom of the bedroom screen door I built this past Spring: 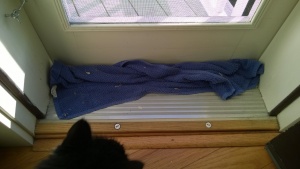 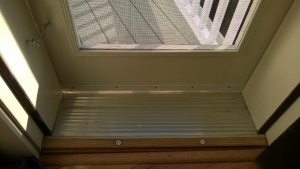 I’d installed a door sweep originally, the kind with the adhesive back that “sticks to anything!”.  It fell off after a couple weeks, so for the past 4 or so months we’ve been using a towel to keep bugs out… classy.  Today I installed another adhesive one but this time I also screwed it into place.  Total time to fix = 10 minutes.

On Wednesday I got my Little Giant ladder out, set it up in each corner of the bedroom, climbed up and removed the high altitude dust bunnies [ceiling cobwebs] lurking in the vaulted ceiling & around each ceiling light:

Then I hauled the ladder down to the living room & repeated the process.  The living room took waaaaaaaaaaay longer.  Mostly due to the hoards of long-tailed cats spread across 4 shelves and the 3 layers of curtains & shades in each window.  I usually take each cat down for a dusting every 6 months but I must have missed last time…: 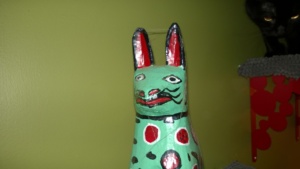 Look at that little dusty face!  And the large dust bunny above it – ugh: 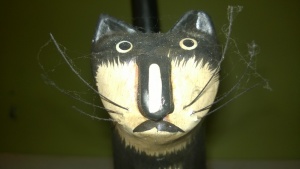 Total time = 80 minutes.  The bedroom took 20 and the living room took an hour.  Crazy!  But it’s done now.  I checked for high altitude dust bunnies in other rooms but they seem to only occur in the bedroom & living room.  After much thought, I have a theory about that:  both we & the cats spend most of our time in the bedroom & living room; the ceiling fans are on almost all year round in both rooms.  I think we [humans & pets] create a lot of dust which the fans send airborne where it collects on shelves & sticks to cobwebs instead of being vacuumed up nods.

This ended up being a 2 day project face palm.  On Thursday I grabbed the vacuum, emptied the canister [so I could keep track of how much fur I was removing] and carried it upstairs.  It took 90 minutes to vacuum the 7 upstairs cat platforms & 2 cat trees.  OMFG!!!  Way longer than I expected.  But check out this H·O·R·R·I·F·Y·I·N·G mass of fur & dust no longer polluting our upstairs air: 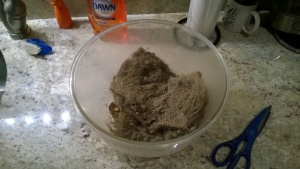 It made quite a visual difference, and will definitely improve air quality.  Here are some before & afters of the bedroom cat tree: 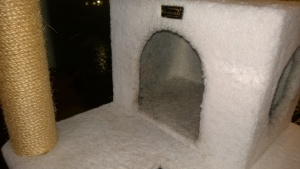 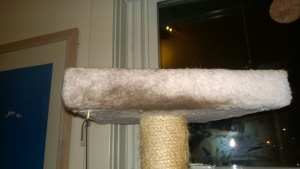 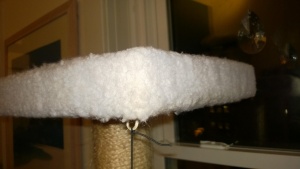 Darwin was VERY happy to have a freshly vacuumed tree – he jumped right up and slept in the house part all night: 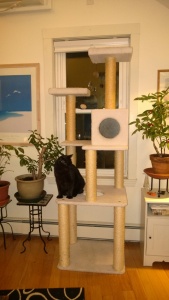 On Friday after work I spent ANOTHER 90 minutes [!] vacuuming the 18 downstairs cat platforms, both fleece igloos, & both cat beds.  Here are some impressive before & afters: 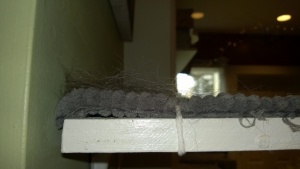 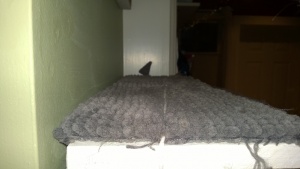 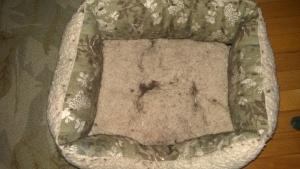 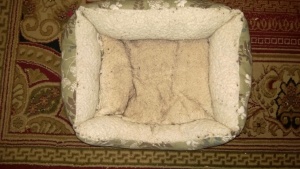 Here’s the final result from both floors – disgusting!: 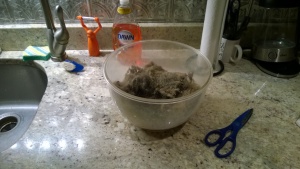 And seriously – WE HAVE A VERY CLEAN HOUSE!  You wouldn’t think it from this post, but we do.  Seriously.  We have a very thorough cleaning man come in every 2 weeks for the basics.  Ted is a literal life saver!  But it’s easy to get lazy with the non-standard stuff like cat platforms & trees…  The scary part of all this is I’m allergic to cats & dust!  That huge bowl of fur, dander, & dust could literally send me to the ER.  But I REALLY wanted a visual of how much was removed.  Crazy.

Thankfully this one is EASY and only took 10 minutes 🙂  The first thing I did when I woke up today was move the bicycles from the alcove under the stairs to the basement.  In their place I set up a little table & basket for the mail: 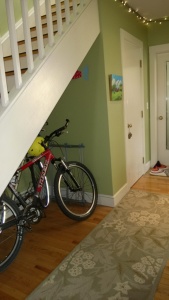 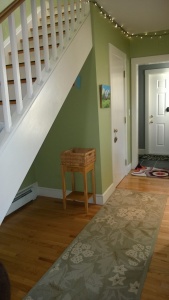 We never even rode the bikes once this summer… so they may as well live in the basement until we decide to use them again.  And a basket for the mail will mean no more paper chaos on the dining room table.