As you probably know by now, the Ipswich River water level is at an historic low.  Here are some random pics I’ve taken over the past month: 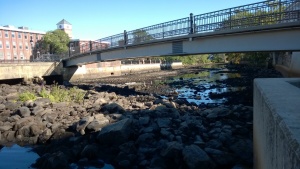 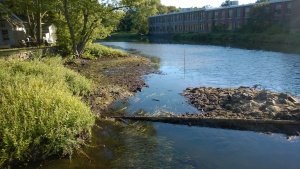 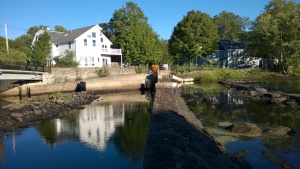 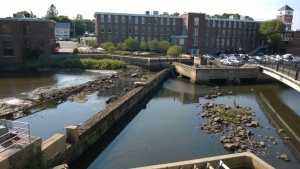 We’re seeing parts of the River that have always been covered by water, even at super low tide.  I’ve already discussed the poor turtles who were getting trapped in the fish ladder, but the otters have been displaying some amazing ingenuity.  Back before the drought they used the fish ladder to get from the tidal water below the dam to the fresh water above the dam: 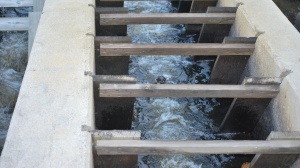 But with the fish ladder empty and blocked off, they’ve had to find other means.  One method they are using is the drainage hole connecting the River to the street storm drains and [we think] the pond behind our neighbor’s house.  Last week we saw the 2 adult otters leading their pup [so cute!] around the base of the fish ladder and up into the drainage hole, at a pretty fast clip [too fast for pictures unfortunately].  A few minutes later they popped out upriver [we don’t know exactly where they come out] and were swimming around with the pup.

It has always been our theory that the beavers, otters, & turtles use the storm drainage system to move between the local ponds and marshes, and to get from the tidal water below the dam to the fresh water above it – here’s a snapper coming out of the drainage hole into the River a couple of years ago: 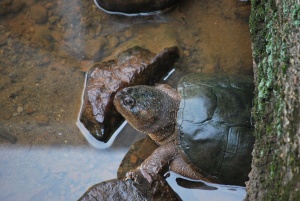 Last week I noticed 2 big rocks were blocking the drainage hole [which is right below our yard], so I jumped down and moved them out of the way [how does that even happen?]: 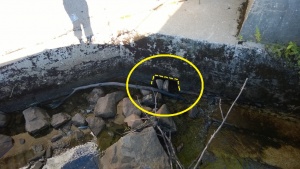 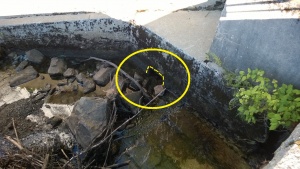 There didn’t used to be that many rocks down there… not sure where they’re coming from!  But I think I need to jump back down and move more of them away from the drainage hole.  It’s hard for turtles to climb over all those rocks!  But the drainage system allows the critters to move safely around town, under the streets.  I have always envisioned a disco down there, where the otters, beavers, turtles, etc. are dancing and sharing stories over cocktails 🙂

Another way the otters are getting from the tidal water below the dam to the fresh water above the dam is by using a naturally occurring pile of rocks [which under normal conditions are barely visible above the water line] to leap up the side of the dam.  Although we’ve actually only seen the “dad” otter doing that.  The mom, the dad, and the pup are all able to drop down from the dam to the rock pile and then into the River, but I believe the dad is the only one big enough to jump up.  Here he goes!: 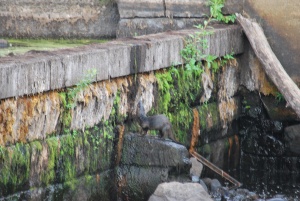 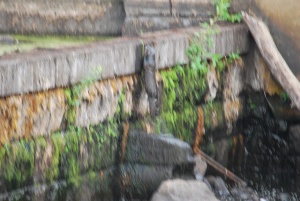 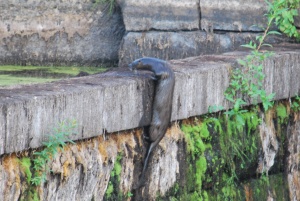 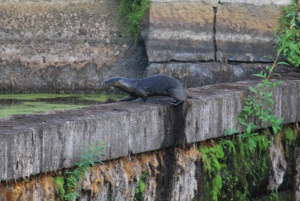 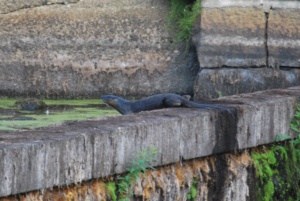 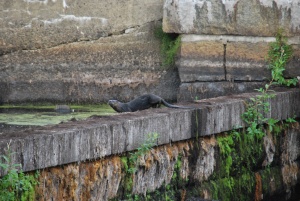 Sorry for the bad photo quality, the otters are only out and about in the very early morning and there’s not enough light for my camera so most of my photos come out a bit blurry.  Here is the otter dad above the dam, catching and eating fish: 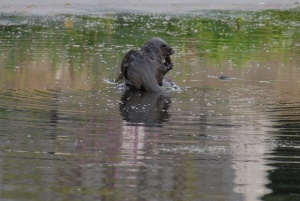 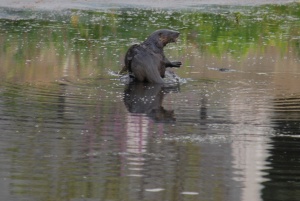 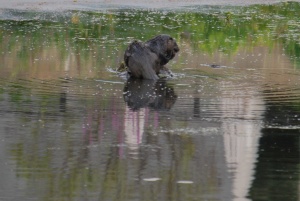 I would imagine he brings fish down to the mom and pup, but it’s hard to tell since it’s fairly dark, especially in the corner across the River where they tend to hang out.  Here’s the mom and pup down below the dam while the dad was up above catching fish: 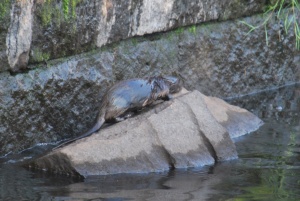 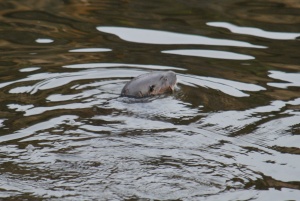 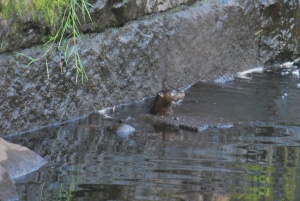 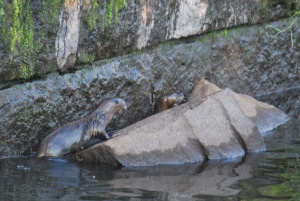 And here’s the dad going back down: 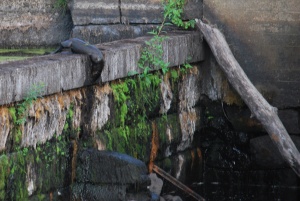 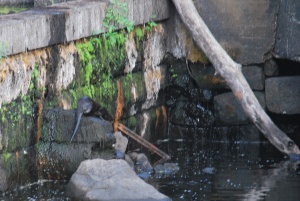 And here are my favorite 2 photos – the first one shows the PUP [so cute!] sitting on the rock waiting for dad.  And the 2nd shows dad staring down at the pup.  Right after I took that photo, the dad dropped down right on top of the poor pup and they both went cartwheeling off the rock into the water – it was hilarious!  The pup didn’t seem fazed by it at all: 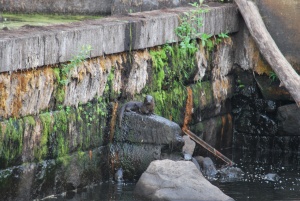 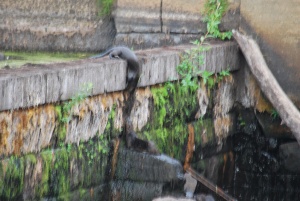 I wish I had a video to show you, I’ll try to get one over the next week.  The pup makes the most adorable chirping sounds.  For the past 4 years we’ve heard what we thought was a weird kind of nocturnal bird, but we could never see it because [1] dark, and [2] the sound echoed all across the River and we could never tell where it was coming from.  I finally realized it’s the otter pup!  I googled “otter chirping” and found all kinds of YouTube videos.  Adorable.  At least now when we’re waken up by the loud “bird” we’ll know we’re actually hearing otter pups!

For reference, here’s the same pile of rocks during non-drought times.  The beaver is using it to investigate the falls: 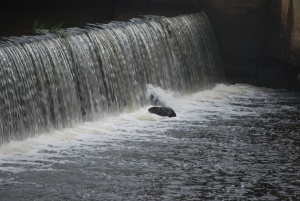 Join 21 other subscribers
← Happy 3rd Blogiversary to Me! ← The Keeper of the Hole